Go back to the early 1900s when gangsters ruled the big American cities in the Grand Loot slot from PariPlay. There, you’ll try to survive while two different gangs are shooting at each other outside a bank. You’ll play on a slot that has 5 reels, 40 paylines, and the exciting Hold and Win feature from which you can win a top prize of 50,000x the stake. Grand Loot has a high variance and an average RTP, so let’s see how these specifications work in action. Read our full Grand Loot Slot Review to learn more. 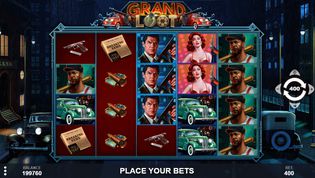 PariPlay continues to produce high-quality slot games with interesting features, and Grand Loot is one of them. With Grand Loot, the developer comes with a game that takes us back to the 1930s when mobs ruled the American streets. As it seems, the game is inspired by Relax Gaming’s legendary Money Train 2 slot. Here, you’ll have the chance to trigger the exciting Hold and Win feature, land some special symbols, and win a maximum prize of 50,000x the bet. You’ll find all the details in our Grand Loot Slot Review.

Grand Loot reminds players how it was like to live in the early 1900s in an American city, probably Chicago, with gangsters and criminal bands. This is a slot machine with decent potential and great bonus feature, but it has nothing special to offer in the base game. However, the excitement during your gameplay is always there as you’ll see two different gangs shooting at each other in front of a bank.

PariPlay has designed the Grand Loot slot with 5 reels, 4 rows, and 40 paylines. You can start playing when you choose your betting level, which ranges from £0.5 to £5 per spin. Press the plus and minus buttons located on the right-hand side of the screen and make sure to adjust your preferred bet. Then, you can start playing by pressing the circled spin button. Winning combinations occur in the usual manner of landing 3 or more matching symbols on an active payline. The most you can win in the Grand Loot slot is set at 50,000x the stake which can be achieved through the bonus feature. We’ll explain how to trigger the feature below in our Grand Loot Slot Review. 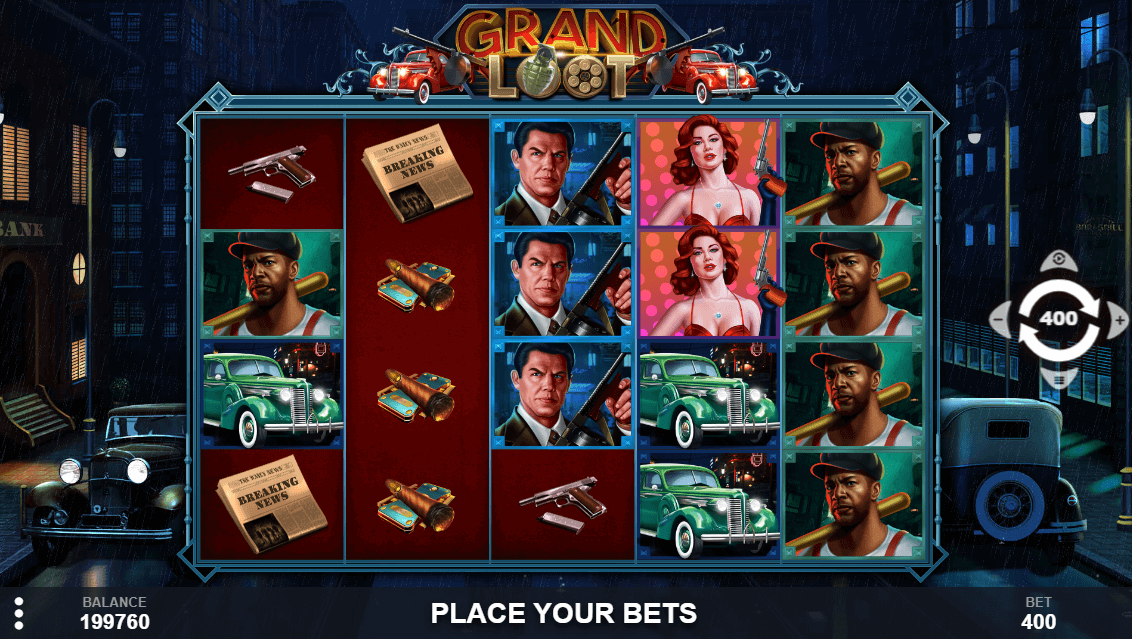 As we’ve mentioned above, the Grand Loot slot shows an American city, probably Chicago, in the 1900s. In the background of the reel set, the rain is pouring down and two gangs are shooting at each other in front of a bank. Overall, it’s a beautifully designed slot with an atmospheric soundtrack and high-quality graphics. And it gets even more atmospheric when you trigger the bonus features, adding the final touch to the gaming experience.

On the reels, you’ll find 8 regular symbols, divided into two categories. The low-value ones are designed as whiskey, cigars, pistols, and newspapers, while the high-value symbols include cars, bouncer, gangster, and mafia boss. The beautiful female is the wild symbol that is the top-paying symbol and acts as a substitute for all regular symbols to help you complete a win. Finally, there’s also a scatter symbol, responsible for triggering the Bonus Feature.

When it comes to the math model, the Grand Loot slot comes in different RTP versions, usual for PariPlay’s releases. However, the general RTP is set at 96.24%, which is the industry average. The game also has a high variance so you’ll land less frequent but more valuable winnings. The Grand Loot slot has a hit rate of 21.53%, meaning that on average, every fifth spin will result in a win. What’s more, you’ll have the chance to win impressive payouts of up to 50,000x the stake. If you want to learn more about different RTP and variance models, read our Variance, Volatility and RTP guide.

In Grand Loot, we are transported back to the early 1900s when many gangsters ruled the streets and created fear among the citizens. However, they all had the same goal - to become rich, and that’s why payouts of up to 50,000x the stake are possible here. Speaking of gameplay, Grand Loot is a simple and straightforward game so you’ll quickly learn how to play it. The game doesn’t offer a variety of features, so you’ll find only one bonus feature that has a massive payout potential. 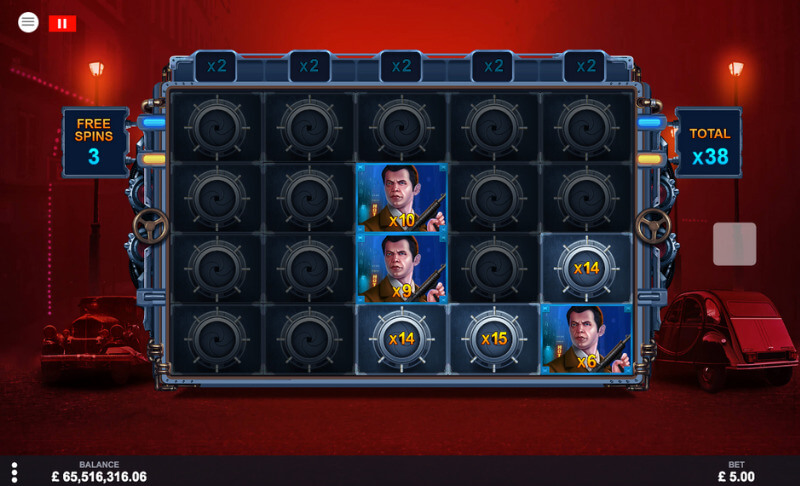 When you land 6 or more scatter symbols on the reels at the same time, you’ll activate the Grand Loot Bonus Feature. Then, you’ll be transported to a new type of reel set and you’ll receive 3 free spins. All scatter symbols that triggered the feature are locked in place and award a multiplier of between 2x and 10x the stake. During the free spins, you can land special symbols which can trigger special features.

Any time some of the special (wild) symbols or a multiplier symbol lands on the reels, the number of free spins will be reset to 3. The main focus during the feature is on the collection of multipliers which can give you massive prizes. Here are the wild symbols that can appear:

The Grand Loot slot from PariPlay is HTML5 optimised, meaning it works without issues on any mobile device and any operating system. The design, bonus features and everything that is part of the game work seamlessly when playing on a smaller screen.

PariPlay is a notable slots provider that has been around long enough to produce dozens of high-quality online slots. For that reason, if you want to try some other slots from this provider, we have a couple of recommendations. Check the King of the Trident slot and meet the God of the Sea to discover the hidden riches that can bring you thousands of pounds. Or, check the Vikings Glory slot and play for the chance to win jackpot prizes or free spins with multipliers. The final recommendation from us is the Wolf Riches slot where you’ll get a thrilling slot action from the full moon rewards, free spins and stacked wilds, random multipliers and the jackpot wheel.

Grand Loot is an exciting and rewarding slot machine that comes with a beautiful design and quality gameplay. It offers a fast-paced adventure with the biggest gangsters where you’ll witness a shooting in front of a bank. The game is a nice alternative to the Money Train 2 slot and offers only one bonus feature with many extras. However, some players might not find it appealing due to the fact that the game is a copy of another game.

Explore the Grand Loot slot and claim your welcome bonus offer at one of our featured casinos.