After more than 6 years, we’re getting an update of the popular Gemix slot from Play’n Go. Gemix 2 is the name of the game and it uses cascading symbols and cluster pays instead of regular paylines. Clusters of 25+ symbols trigger one of the Crystal Charge features.  There are also Super Charges which deliver up to 20x multipliers. The 4 magical creatures have their own powers including mega wilds with multipliers, random wilds, spreading wilds and sticky wilds. In total, you can win 7,500x the stake from a single spin. Find out more in our detailed Gemix 2 Slot Review. 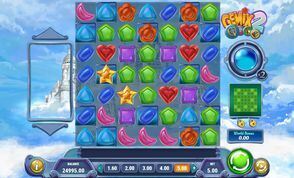 Enter a world with colourful gems and small magical creatures in the Gemix 2 slot from Play’n Go. The game is a sequel to the popular Gemix slot launched a long time ago. When Gemix was released, it became an instant hit among the slots players.

We were all impressed by the exciting features which opened up new opportunities for online slots. Therefore, it was obvious that Play’n Go would release a second game from the series. The Gemix 2 slot comes with a wide range of features and extras, such as cascading reels, mega wilds, sticky wilds, spreading wilds, transforming symbols, and more.

If you’re interested in learning more about this impressive slot game, carry on reading our full Gemix 2 Slot Review. 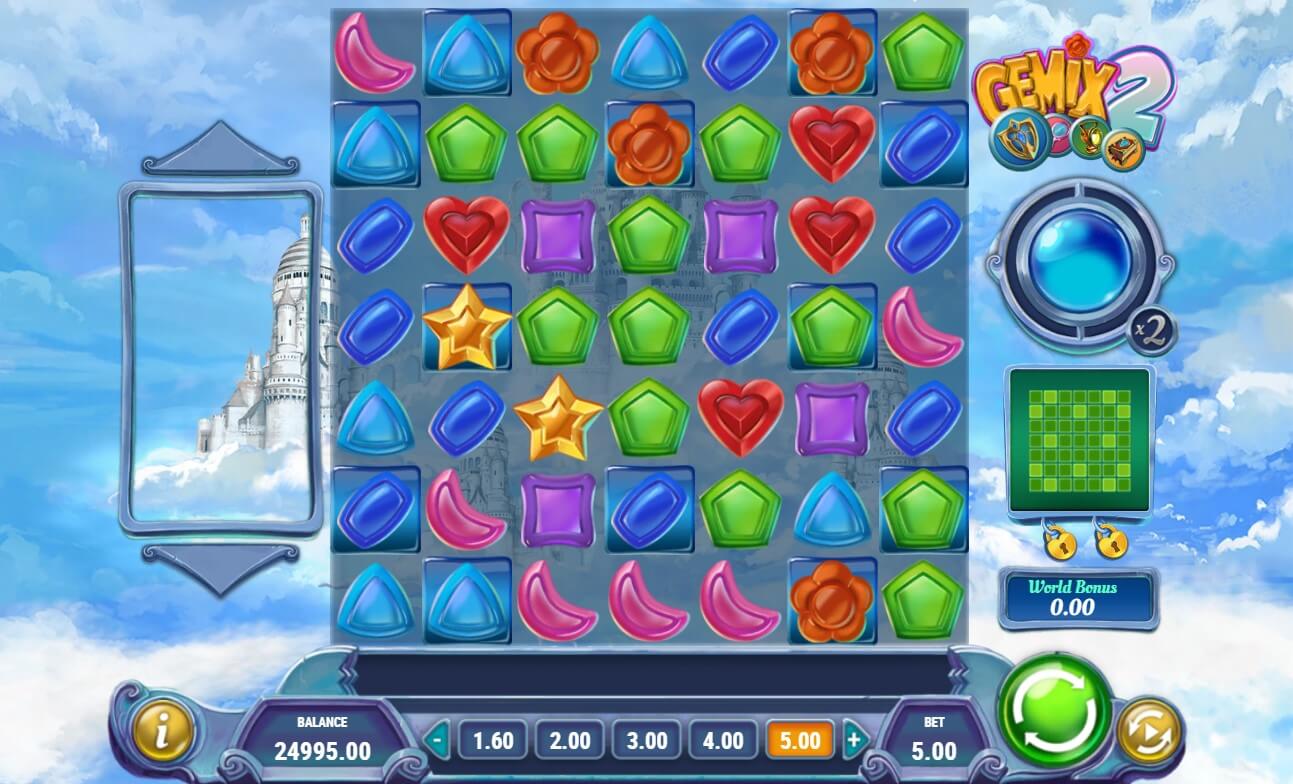 Play’n Go decided to revisit one of its mega-popular games, Gemix, and release a follow-up. The developer has improved the formula and features, while the iconic soundtrack remained the same. After seeing the success of the Reactoonz 2 slot, we believe that the Gemix 2 slot will receive positive feedback as well.

The Gemix 2 slot plays on a 7x7 grid with a total of 49 symbols. There are no fixed paylines, as the game uses a cluster pays system. This means that you have to land 5 or more matching symbols adjacent to one another in order to form winning combinations. What’s more, the game incorporates cascading reels, so you can land more wins in one spin.

This highly entertaining slot game requires setting bet levels before hitting the spin button. Namely, the Gemix 2 slot accepts bets that range from £0.10 to £100 per spin. Click on the plus and minus buttons under the reels to adjust your preferred bet option. The maximum win is 7,500x the stake.

Play’n Go has designed the Gemix 2 slot with unlimited worlds to progress through and a range of modifiers with the help of four magical creatures. There, you will benefit from Crystal Charge, Super Charge, World Bonus, and World Wilds feature. We’ll explain all features below in our Gemix 2 Slot Review. 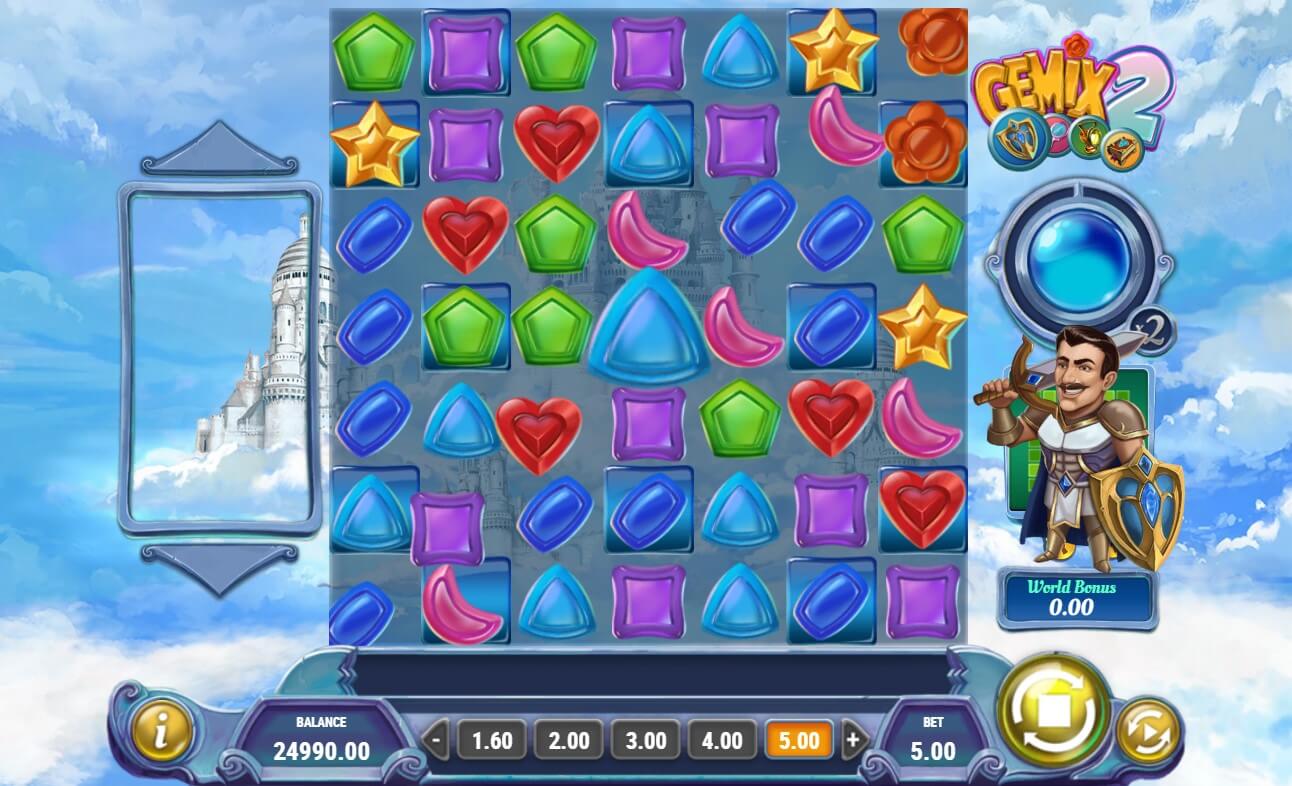 Gemix 2 has an impressive and high-quality design. The game is a sequel to the popular Gemix slot released a couple of years ago and the developer kept the layout. Still, it’s an improved design and the symbols are even more beautiful.

The Gemix 2 slot has a fantasy theme and takes you to 4 different worlds, represented by magical creatures. The reels are placed in the sky where a good-looking castle can be noticed in the background. The epic soundtrack completes the design and adds to the exciting gameplay.

The pay symbols start at the low end with a range of geometric gemstones in blue, turquoise, purple and green colours. They are accompanied by the high-paying shaped gemstones - beans, hears and stars. The most valuable symbol is the star gemstone that pays up to 200x the stake for landing 15 or more in a cluster.

As we’ve mentioned above, there are 4 guardians that can appear, each one with a unique wild symbol. Therefore, you can come across a shield, miner’s lamp, mirror, and magic book. 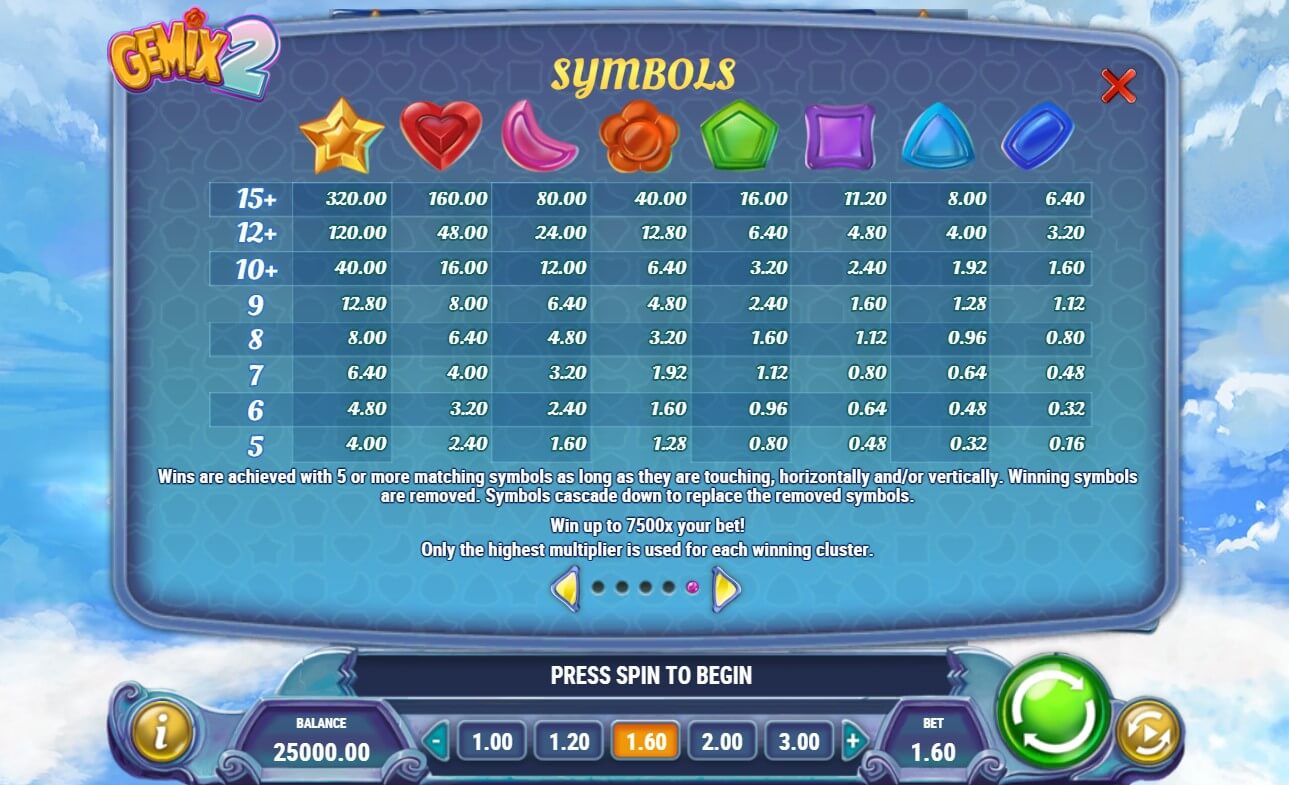 The Gemix 2 slot comes with a default RTP (Return to Player) of 96.26% which is the industry average for online slots. But, some operators might be offering the game with a lower RTP, so make sure to check it before playing.

The game’s variance is medium, meaning that you can land bow lower and higher-sized wins. And thanks to the bonus features, you can end up winning up to 7,500x the stake from a single spin.

If you want to learn more about RTP and variance models, read our detailed Variance, Volatility and RTP guide and see which one suits you best.

Gameplay and Features on Gemix 2 Slot

At first glance, Gemix 2 might appear as a simple and basic slot. However, once you start playing it, you’ll realize that there are many features and extras that make the game more exciting.

At the core of the gameplay is the cascading reels feature with crystal pays which allow you to land more winning combinations in one spin, without fixed paylines. Among the bonus features, we’ll come across Crystal Charge, Super Charge, World Bonus, and World Wilds feature.

When you form a winning cluster on the reels, the Cascading Reels feature is triggered. The winning symbols burst away and new symbols fall down to replace them. This gives you a new opportunity to form another winning combination. The cascading reels will continue as long as you form winning lines.

As you form winning clusters, the number of winning symbols is added to the Crystal Charge Meter on the right side of the reels. The meter is filled when 25 or more winning symbols are collected on a single spin. When that happens, you can win one of the following modifiers:

There are 4 different worlds you can enjoy when playing the Gemix 2 slot. They are represented by the 4 magical characters - the knight, miner, princess and wizard.

On the right side of the reels, you’ll notice the current world and its patterns. When you get a winning combination on the highlighted positions that the map shows, you’ll move on to the next pattern. There are 2 patterns you have to complete per world, in order to move on to the next one. 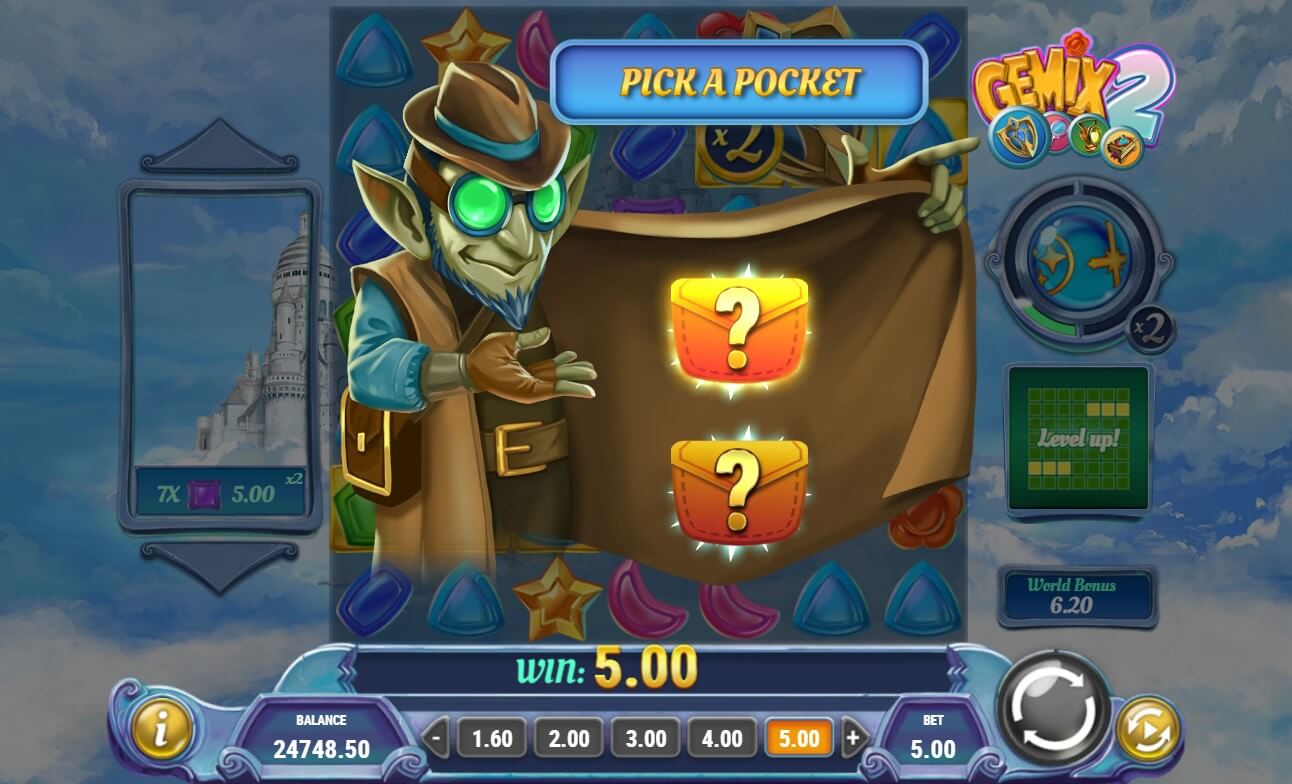 When the patterns are completed, G-Nome appears on the screen and offers you to choose from 2 pockets in his coat. Pick one of his pockets for a chance to win the World Bonus feature. 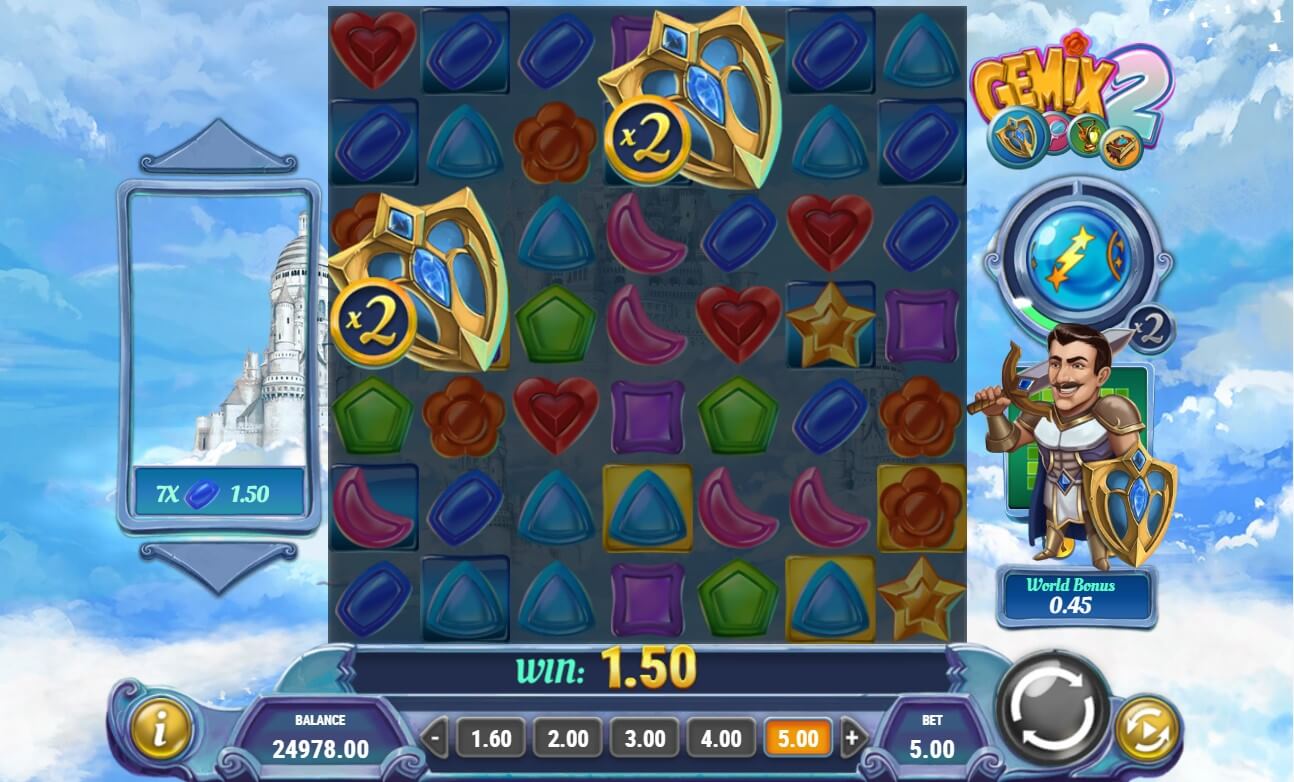 There are 4 different guardians (creatures) that can appear during play, each with its own wild symbol. At random times, you can get a guest appearance from another guardian from another world. Known as the World Wilds feature, the guardian of the world can offer you different extras:

The Gemix 2 slot is optimised to work on all mobile devices and it loads on any operating system without issues. The developer has built this game with HTML5 which makes it adjustable on any mobile. The quality design, gameplay and bonus features work perfectly on a smaller screen.

Play’n Go is one of the most popular slot developers, offering cutting-edge technology and top-notch features in its games.

One of the latest Play’n Go releases includes the Rich Wilde and the Amulet of Dead slot. With 5 reels and 10 paylines, the game comes with Thoth wilds and multipliers, as well as unlimited free spins with a special expanding symbol.

Another popular game from the developer is the Fire Toad slot. This game will take you on an island of unlimited free spins, infinite retriggers and a chance to spin the reels for free. You can win up to 5,000x the stake.

Finally, you can check the Fire Joker Freeze slot and play with the Fire Joker. In this “freezing” edition, you’ll play with fire and ice wilds, re-spins, or spin the wheel that can win you different packs of multipliers. 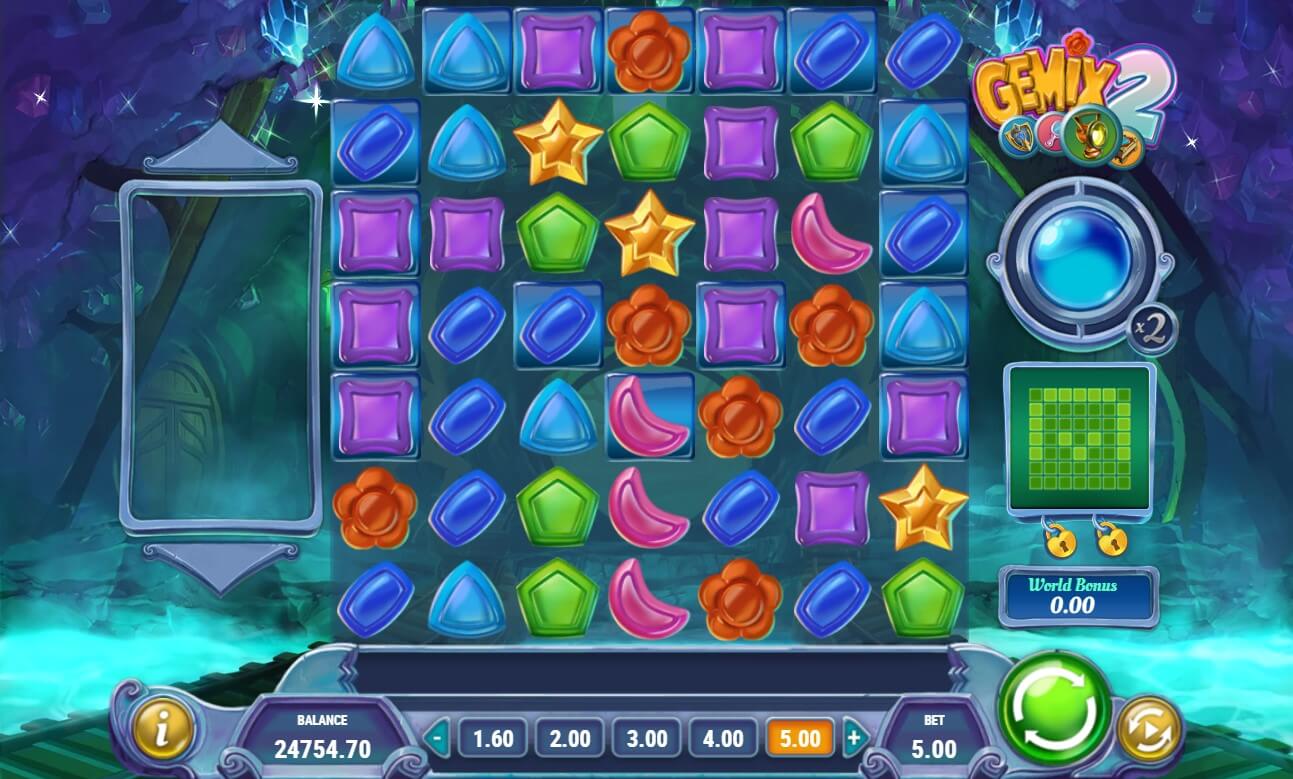 Gemix 2 is an impressive online slot game. Players who enjoyed the Gemix slot will be glad to play its new version which comes with even better features. The low minimum bet per spin makes the game suitable for low rollers, while the medium variance allows landing more frequent wins.

The game’s cascading reels feature gives more opportunities for landing winning combinations and triggering one of the features. And when it comes to the features, Gemix 2 has a lot to offer. Its wonderful guardians are waiting for you to join them and get the most out of this fantasy adventure!

Claim a welcome offer from this page and discover the Gemix 2 slot at top-rated online casinos.