Pick and a heavy rock and roll with Testament on the online slot made in their name by Play'n GO whose slots experts have made it start with 243 and expand to 2400 ways to win on the bonus. Two free spins levels and three reel modifiers can blow up the symbol wins to better amounts. The theoretical maximum payout is 20,000x and the variance is to the highest. 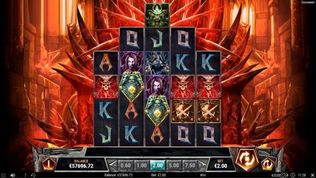 Play'n GO's passion for music has resulted in a number of online slots themed on a heavy metal or rock band. The Sabaton slot, Demon and Black Mamba all fit the category and another such game is added with their latest release of the Testament slot.

Testament is a thrash metal band from California that is considered one of the biggest in the genre, along with Metallica, Exodus, Slayer and the rest. Play'n GO have given the band a proper treatment to capture the essence of their music and image.

All of the symbols on Testament reflects imagery that are inspired by some of their lyrics and by the artwork on their studio albums, which fits excellently with the explosive gameplay dynamics.

Besides the potential for base-game payouts the game has three reel modifiers and two free spins features. All of this is a recipe for a fun-loving, heavy-metal adventure on five reels and three rows.

This online slots adventure is set in a gothic temple with tall windows, columns and a grey light that eminates from behind.

The reel-set itself displays two symbol categories: the royal cards are made like blades of metal; the high-paying picture symbols are as metal as they come - a shield with a pair of swords, a throne filled by a demon king, the gnarly face of an imp and a she-vampire ready to draw blood. Metal fans will certainly rejoice.

Testament slots could have barely been named that if it weren't for the songs taken from their opus. Play'n GO have chosen the best thrash metal for the occasion and the result is, elevated octane units to give torque to the fun-loving gameplay.

Each winning outcome is marked by an explosive display of graphic mastery around the symbols, all for a superb adventure, perhaps even more so than what Sabaton was able to create.

How to Play Testament Slot

By now any slots player who's played a Play'n GO game is familiar with the layout. All of the settings are in the bottom of the screen, below the reel-set.

The spin button is a circle with arrows inside, glowing green. Press it once to send the reels spinning for one draw of the bet. If you want to let the Testament slot do the work on its own you can select the autoplay button.

Autoplay is a pentagon in the very bottom right corner. Press it to open the menu and select a number from the automatic spins presets. You can also add the optional stops on the autoplay mode which give you more control over the balane.

Optional stops are single win limit, total balance drop, stop on a feature and so on.

As for the bet amounts, these can be selected from the sliding scale below the reels. The players can choose between the minimum bet of £0.10 and the maximum of £100.00 per spin.

Regardless of what bet is selected, low or high, Testament will spin the reels across all 243 ways to win.

How to Win Testament Slots

The game comes with 243 ways to win which require payouts to begin on the leftmost reel and to extend onwards and on consecutive reels. The payouts begin with three matching symbols and the optimal wins are paid with five.

The most valuable symbol in Testament slot is the demon skull, paying 12.5x multiplied by the winning bet when five of the same fall on consecutive reels. The same symbol can become a wild at random, in addition to the other wild symbol which is a fiendish man wearing a pair of demon horns. That symbol pays 15x on the winning bet.

Play'n GO have instilled a number of bonuses and extra in this release. First off, there are three features that cast a reel-modifying event along with one of the band's songs.

Dark Roots of Earth has a wild symbol that expands up or down on the reel.

Throne of Thorns is a reel-expanding feature. With it, the 243 ways to win expand to 2400. The game’s maximum win potential is a theoretical 20,000x multiplied by the winning bet.

Any of the three features above are triggered with two scatters, represented by the Dark Roots of Earth album cover.

The game triggers two free spins modes. You need three scatters to trigger either one. The Rise Up free spins mode starts with an expanded reel-set that has block symbols on it. Each time a scatter land a block is removed and this opens up more ways to win. If all of the blocks are removed, Testament slots will expand to the full Testament Free Spins mode where each of the three Song features are activated in the gameplay.

The game has been long anticipated so it will be a matter of whim if Play’n GO decide to release it at the online casinos that host free play demo slots.

With more than just one feature and with the game’s ability to unleash a sequence of events that expand on the bonus features, it is possible for the luckiest players out there to reach up to 20,000x of the maximum payout.

Discover the Testament slots by claiming a welcome offer right from this page and play at top notch online casinos.