Discover the Kingdoms Rise Captain’s Treasure slot and play for a chance to win respins and reel-modifying wild symbols. The game has 50 paylines and two wild symbols that can pay up to 1000x each for wins of six of a kind. The game offers a dynamic gameplay with the optional token and feature buy. 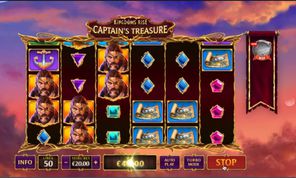 Those who are familiar with the Kingdoms Rise online slots series will feel at home with the latest addition that's all about the reel modifiers that can be triggered with the wild symbol.

This time around, the players are looking at a reel set of four rows and six reels that spin across 50 paylines. At the helm of this voyage is a captain whose mission is to navigate to a hidden land according to the rare map, where there riches to be hand in gold coins and precious stones.

Winning outcomes are made with three matching symbols posting on any one, or more, of the game's always-active paylines. This is possible with and without the reel modifiers, occuring with the help of the wild symbol, which can spread across the reel-set. Like in the other editions of Kingdoms Rise, Captain's Treasure offers the token collect and feature buy option, which can spice up your adventure.

In terms of the graphics design, Playtech's Origins have designed another marvellous online slot. The series has a reputation now for excellent design and this is evident in the game at hand.

Kingdoms Rise Captain's Treasure slots has animated wins with the high symbols and each winning outcome is treated to lightning that passes across the reels.

Most anticipated symbols are the golden medallions, which is one of the two wild symbols, and of course, we all want to see more of the regal medallion with the letter W inscribed in it.

Interwoven through all of it is a musical theme that is quite epic and has the same quality of the previous editions.

Your gaming adventure can begin with the push of the Spin button, but before you do that you may want to take a look at the active bet, as the default may be an amount that you wouldn't want to play with.

To change the bet you need to press the minus or plus buttons that can be found in the bottom area, to the left of the center. The smallest bet on the Kingdoms Rise Captain's Treasure slot is only ten pennies per spin, which doesn't amount to a penny, while the maximum bet is £1000.00 quite typical for exclusive Playtech slots.

The Auto Play mode on Playtech slots doesn't offer optional controls, such as stop on a single win amount or stop on a feature trigger, but simply allows the players to select from the available automatic spins presets.

And as it has become frequent in recent times, Playtech have included a Turbo Mode button which causes the reels to spin faster and stop sooner. Press the button to toggle this option on and press it again to  toggle it off.

Winning outcomes are made with three or more symbols of a same kind falling on the paylines and there can be more than just a single win outcome resulting from the same spin.

The high paying symbols category include the captain and his gulley, the treasure chest and the map, the anchor and the barrels of rum. However, it is the wild symbols that pay the biggest amounts.

Either of the two wild symbols pay 1000x on the payline bet when six of these symbols post on a payline. Five of the same, pay 225x, a comparably thinner award from the optimal wins. Kingdoms Rise Captain’s Treasure slot has a class of low-paying symbols which consist of four precious gems.

There are few extra features in the game and one of these are the Captain's Treasure Respins. The feature occurs with the W wild symbols falling on the reels. In the event, the gold wild symbol will move in any given direction, leaving a trail of wild symbols behind it. The wild symbol will move around with each spin. The respins last until that symbol has returned back to the starting position.

The tokens that are collected through the game can be used in the Kingdoms Rise Shop. Players can also purchase tokens and use them to buy bonus features that can be deployed at any time.

Playtech have released everything one in the Kingdoms Rise slots series as a free play demo slot. This is going to be the case with the Captain’s Treasure edition, once it has completed its exclusive release period.

Even though the maximum paying symbol is 1000x the game can throw in multiple high paying symbol outcomes in a spin or in a sequence of events, which can lead to bigger prizes. This number isn’t the maximum exposure, as we are used to seeing these Playtech slots pay upwards of 10,000x on the winning bet.

Discover the Kingdoms Rise Captain’s Treasure slots by claiming a welcome offer right from this page and play at top notch online casinos.

Cash in the Keep