Play the game that completes the Kingdoms Rise series. This is a progressive jackpot slot on three rows and five reels. 25 always active paylines spin for a chance to shake out sizeable wins, thanks to the war hammer thundering on the reels. Two symbols interact with the wilds to add a hammer on the meter and there is a respins bonus with sticky wilds. 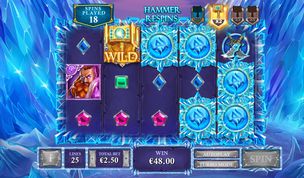 Discover the Kingdoms Rise: Reign of Ice slot and play for a chance to win cash prizes or one of the three jackpots.

By the appearance of things Playtech must have been really into Game of Thrones and the series' finale had rubbed upon them a thing for ice. The Kingdoms Rise series has been shaping up to become the first epic online slots that carry a narrative of sorts. It is an entire world all right, and now the Kingdoms Rise: Reign of Ice slot completes it as another game where players can buy tokens and use them in any of the installments.

The island of the Kingdoms Rise slots epic has been enriched with another land. This time it is an icy world of brutes and heroes wielding fierce weapons that can bring both cash prizes and multipliers. The reel set consists of three rows and five reels and these play across 25 paylines that are active with each spin.

The game has the habit of turning up stacking symbols of the same kind, as well as expanding symbols that carry a value for each third that falls on the grid square. As it is the case with the other games of the series, there are tokens that can be collected during the gameplay. What is specific to Reign of Ice are the unlimited respins and frozen wild symbols which have their say in the gameplay and toward the possibility of landing big wins.

Playtech's Origins is the outfit behind this epic slots series. They have a knack for creating unique worlds that that is evident too on the Kingdoms Rise: Reign of Ice slots. The reel set is confined in ice and the same is the stuff that makes the backdrop. The symbols depict two heroes and these are surrounded by their weapons and medallions.

Each winning outcome is marked by energetic splash screens on the symbols. The heroes' eyes light up and the weapons buzz with electricity. The hammers aren't just for show. When these become destined for the meter above, they make a strong thunderclap on the reel-set and fly off to mark the progress.

Overall, this game has a solid design, which we can't say about a certain edition of the Kingdoms Rise slots.

How to Play Kingdoms Rise: Reign of Ice Slot

Your adventure through the gauntlet can begin with the push of the Spin button which is located in the bottom right corner of the screen. The game has an autoplay mode and a turbo mode, which causes the reels to spin faster when it's toggled on.

The bets can be configured in the Total Bet window which is located in the bottom left corner of the screen. The range of bets is huge, and that's to say the least. Small bets start at only £0.10 per spin which breaks down the penny to fractions as a bet on the payline.

On the other end of the betting range is the maximum of £2000.00 per spin. Playtech have outdone themselves with this choice, as they usually cap the bets at £500.00 per spin. Kingdoms Rise: Reign of Ice slot isn't the only one in the series with an exorbitant maximum bet. But that's maybe just for show as most players will spin on bets that are more modest.

To set the autoplay mode and have the game spin the reels on its own, use the Autoplay button. Pressing it will open up a list of number presets for the automatic spins. It's best to mind your balance as there aren't any of the optional stops that are usually part of the autoplay mode in slots by other developers.

How to Win Kingdoms Rise: Reign of Ice Slots

First and foremost, this is a jackpot slots with huge progressive prizes in three tiers: PowerStrike Jackpot, Majestic Jackpot and Epic Jackpot, which can reach £1,000,000.00.

But before any player reaches either of these jackpots the Kingdoms Rise: Reign of Ice slot must make the spins that pay regular payouts. These are made with three or more symbols of the same kind and for a win to register the symbols must land on the leftmost reel and on to the right.

The most valuable symbol is the barbarian and pays 300x multiplied by the payline for five of the same. The Valkyrie is just as valuable with 250x for a payline win of five.

The double axe pays 125x, the crossed sabers and the mace pay 100x. These comprise the high-paying symbols, while the rest are the various medallions.

The blue gem symbol is a wild and substitutes for all except the war hammer wild. This symbol falls on the three middle reels and the hammer only stops on reel two.

When the hammer is in view, every barbarian or Valkyrie symbol can result in one hammer being added to the meter. When the meter fills the game triggers the Hammer Respins bonus.

During the respins the wilds freeze on the reel set until the golden wild lands on reel 2. In the event a hammer drops from the meter and results in a multiplier which can be x1, x2, x3 and x5.

The bonus feature lasts until the last hammer drops from on the reel set from the meter.

Playtech Origins as well as the parent company release their online slots as free play demos. This will be the case the Reign of Ice slot.

Another jackpot slot of the series. We can’t say if it’s the best one, as that is purely a matter of taste. But as far as the gameplay is concerned Reign of Ice brings a dynamic that isn’t paralleled by any of the other releases, save perhaps for the Kingdoms Rise: Forbidden Forest slot.

Claim a welcome offer from this page and discover Kingdoms Rise: Reign of Ice slots at top rated online casinos.