It is a world long lost and forgotten, yet one hiding immense riches. Discover it on the Kingdoms Rise: Guardians of the Abyss from Playtech's Origins outfit. The game offers 25 paylines on five reels and three rows, along with three reel modifiers and a free spins bonus that is triggered in a unique way. Like in the other editions of the series, the players can collect tokens and use them to buy features. 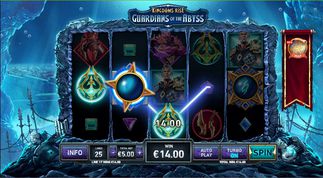 Discover the hidden world and play for a chance to win up to 350,000x on the Kingdoms Rise: Guardians of the Abyss slot.

Playtech's Origins outfit was acquired by the international online casino gaming giant in order to bring more exciting slots to their roster. 2019 is the year of their Kingdoms Rise series, which consists of three slots built around science and epic fiction themes.

Kingdoms Rise: Guardians of the Abyss slot is one of the three installments. It takes place in a blue world of sorcery and elemental powers which are out to the effect of delivering multiplying wilds, random wilds and the mighty Odeon symbol stopping on the reels in greater frequency.

Still, the maximum theoretical payout from a single spin on this game is up to 300,000x.

Again, this installment brings us into a dystopian world, but this time around it is underwater, set on a pile of molten rocks and collapsed statues from a preceding civilization. There is a sprawling city far in the background and an eery feel coming from the blue light. Origins surely know how to make you feel in another place.

The game sports symbols that are part of the speculative story, however, the rendering is two-dimensional and these remain stoic even when they become part of a winning outcome. A musical score doesn't exist so we are left with a sound effect triggered with each spin.

Kingdoms Rise: Guardians of the Abyss slot could have been a lot more but Playtech have opted for a more basic and down to earth layout.

How to Play Kingdoms Rise: Guardians of the Abyss Slot

Before you set the reels spinning with the push of the Spin button you may want to check out the default bet and change it to something that is more in line with your balance.

The bets can be selected from the the window underneath the second reel by working the plus and minus buttons. The smallest bet that's available on the Kingdoms Rise: Guardians of the Abyss slot is £0.10 and the maximum is £300.00.

There are 25 always active paylines on this game and the symbol wins are made with three or more symbols landing on one or more of the paylines, from left to right.

To make the reels spin faster you can toggle on the Turbo button which is to the right of Auto Play. This button lets you select from the automatic spins presets that range between 10 and 100, with the optional 'until feature' preset.

How to Win Kingdoms Rise: Guardians of the Abyss Slots

When it comes to the wins, this edition in the series offers symbols that carry a heavier pay. The wild is the most valuable and pays 1250x when five of the same stop of a payline. This symbol substitutes for any except the scatter shell and the golden scatter shell.

The Odeon symbol has been given the power to appear on the reels more frequently than the rest of the symbols and that's a good thing, because with it, the chances for getting to the 1000x win for five of the same is greater.

The two other characters, named Akali and Jax pay 750x and 500x with five on a line, but they also carry a bonus feature, that is, a reel modifier. Two additional symbol sets are there, three coats of arms which are medium paying and a number of gems which are the low paying symbols.

The bonus game is triggered by the Secret Shells and there are two versions of this symbol. Both deliver secret rewards, but unlike the silver one, the golden shell reveals bigger prizes.

When thee shells appear three on the reels the first one shows the bonus feature that will be triggered on the Kingdoms Rise: Guardians of the Abyss slot; the second determines the number of free spins and the third states the power of the feature symbol.

The players can discover all of the features on this online slot by playing its demo version. Playtech and Playtech Origins are both known to release their new online slots so that the players can get a feel for it ahead of time.

This is one of the editions of Kingdoms Rise and it is comparably different from the Kingdoms Rise: Sands of Fury slot and Forbidden Forest. The symbol prizes are a lot bigger here but there aren’t any sticky wilds and respins, however the character symbols that are revealed for the bonus feature are responsible for boosting the chances for getting a bigger win.

Claim a welcome offer and play Kingdoms Rise: Guardians of the Abyss slots at the online casinos on this page.