Slot players are going to find a game of three rows and five reels that spin across 20 paylines. Thus far the game is standard and there isn't much in it that can make it stand apart from other Pragmatic Play games that have the same layout. Nevertheless, those who play Peaky Blinders are going to find a medium to high volatility and a theoretical return to player of 96.50% which is quite decent, along with a maximum payout potential of 2022 multiplied by your bet. 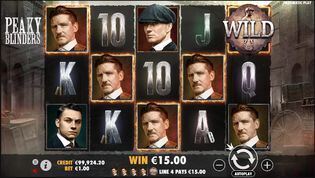 Mr. Cumberbatch looks stunning in his Holmes-like flat cap and the other actors from the popular television series Peaky Blinders are nothing short of regal in the slot game of the same name that was released by Pragmatic Play in August 2020. Players are going to find an exciting reel adventure that features the show's lead actors who can engage in a decent base game and two rather exciting free spins bonuses.

In terms of gameplay, the slot experts at Pragmatic Play have created a game that combines the show's characters with the set of royal cards plus the ten-card for its symbols. There is a wild symbol that can substitute for any, except the scatter, and there is of course that symbol, which can trigger two free spins bonus with different characteristics.

Overall and in terms of graphic design, this is a decent game that can provide the baseline substance for a visually-engaging game, but it seems to fall short of engaging the player on another level that makes it desirable to play for the payout potential. The graphics are very grey, which is no surprise, because the setting of the Peaky Blinders slots and of the television series is set in a gloomy peak industrial-era London.

If you play Peaky Blinders you are going to find a game that can keep your attention if you had enjoyed the show, which, by the way, is still being produced at the time of writing our Peaky Blinders review. Nevertheless, the soundtrack is quite alright, heavy on ambiance sounds and it can overall contribute to the reel adventure ahead.

How to Play Peaky Blinders Slot

Playing the game requires new players and those who aren't familiar with Pragmatic Play slots, to get familiar with the surroundings and the game's buttons. All of the necessary buttons for the gameplay can be found in the bottom right corner of the screen.

The plus and minus are big enough not to be missed and pressing either one will open up the controls from where you can select the bet amount. Peaky Blinders slot has a range that begins at 20p per spin and ends at the maximum bet of £100.00.

Players can enjoy the game in its autoplay mode, which means, it is possible to play without making manual inputs once you have configured the automatic spins settings. This can be done by pressing the Autoplay button below the Spin button. Another one that can come in as useful is the 'i' which stands for information, which is exactly what you can get regarding the symbol payouts and extra features of this game.

How to Win Peaky Blinders Slots

Winning in the game requires three or more matching symbols to post on one of the paylines, but it is also possible to get multiple winnings from a single spins, anywhere across the maximum 20 paylines.

In terms of symbol values, there are few on the Peaky Blinders slot that are worth mentioning.

If you get four or five of the characters' symbols on a payline you stand to win from 2x to 20x your bet. Three of a kind pays between 0.5x and 2.5x your bet.

The wild symbol is worth 2.5x, 10x and 20x for three, four and five matching symbols on a payline.

There is a scatter symbol that carries the show's name plus the word Symbol that can occur on reels one and three. The free spins bonuses are triggered when this symbol lands in combination with either the Shelby Betting Shop symbol or the By Order Of The Peaky Blinders symbol.

Both symbols can appear on reel five and can trigger either their bonus game, which comes with straight cash rewards, or the free spins bonus. Which one you get depends on the combination of bonus symbols. Shelby Betting Shop lands you eight spins and come with special reels and the other bonus come with ten spins and special reels, as well as respins and transforming symbols.

Those who are intrigued to try the game can do so with free credits because Peaky Blinders is available as a free play demo slot at online casinos that host PRagmatic Play slots in practice play mode.

Overall, it’s a decent game and one that’s worth trying, just don’t expect that it’s going to be as interesting on your second sitting. Nevertheless, the bonus features may be worth the try.

Discover the Peaky Blinders slots by claiming a welcome offer right from this page and play at top-rated online casinos.