Those who play Gem Splash: Rainbows Gift can enjoy a reel adventure on four rows and five reels that spin across 30 paylines. Players can make bets that start at only 10p per spin and winning outcomes are formed with at least three symbols. The theoretical return to player (RTP) is 96.46% and the variance is between medium and high. Gem Splash Rainbows Gift is a jackpot game with three instant prizes. 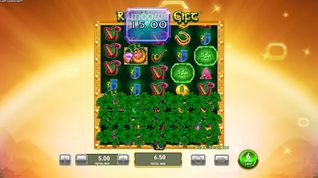 Rarestone Gaming is a standard partner of Playtech and they produce slots that are always exciting to play. It looks like they have begun a new series titled Gem Splash. The first game in that series is Gem Splash: Marilyn Monroe but for the second release they are going away from Hollywood and straight to Emerald Isle for a game called Gem Splash: Rainbows Gift slot.

The game is an amusing display of Leprechaun accoutrements but these come into second plan and are only behind the head honcho himself, who is holding a pink diamond. Lo and behold, the game is called Gem Splash for a reason, as it casts symbol overlays that can trigger cash winnings that have a wide range, from just regular payouts to big pays, especially in the free spins bonus.

Rarestone Gaming has tapped all of the recognizable elements for the making of this game, so the player gets transported into the realm of the leprechauns and their harps, smoking pipes and golden horseshoes. These represent the high-paying symbols of Gem Splash: Rainbows Gift slots.

Additional symbols are the low-paying royal cards and the two symbol overlays that give the game its "Gem Splash" element of the gameplay. The game is animated and fun to play because all winning outcomes are marked with light and movement around the symbols.

The most fun part of the gameplay is when the colossal symbols blob up the reel-set in a layout that feels liquid and bubbly, which dances to a subtle fiddle theme.

To start playing, players have to simply press the green round button in the bottom-right corner of the screen or to tap that button if playing on a mobile phone. The game automatically deducts the active bet amount which is shown in the bottom-left area under the heading Total Bet.

Players can play Gem Splash Rainbows Gift for as little as 10p per spin or choose any of the available bet amounts up to £500.00 per spin. The casino's default bet may be bigger than some players may wish to spend so it is best to change to an amount that is preferable.

Gem Splash: Rainbows Gift slot can be played in its autoplay mode. Pressing the corresponding button opens up a slider that can be placed on one of the automatic spins presets. Once ready, players need to press the spin button to get the game underway in this mode.

There are few additional buttons on the reel set, such as the setting for the sound, the menu button and the paytable, which opens up a board showing all of the symbol payouts at each winning outcome level.

There are just enough symbols on the reel set for a fun-loving reel adventure on this game. As per the usual, winning outcomes are made of three matching symbols, four or five. These need to fall on one either one of the 30 paylines.

The highlight of the game are the Gem Splash symbols, but we will get to that in just a little bit.

Players can win up to 480x multiplied by the winning bet on the Gem Splash: Rainbows Gift slot, however, the symbol payouts are not something to brag about because this is the game making a balancing act between that and the high-paying possibilities of the Gem Splash feature.

The game comes with the Gem Splash symbol which needs to coincide on the reels with the Gem Drop symbol. In the event, the prize that is carried by the first is paid and the amounts can range between 1x your bet all the way up to 100x.

Gem Drop is a symbol that hovers on top of the symbols. I can come in various sizes, but the main feature is that it lingers on the reels until it exits the set at the bottom-most reel.

The free spins bonus is triggered by three, four or five scatter symbols in exchange for 8 spins. This is where the game can send big symbols. Another part of the gameplay is that the game adds up to 7 rows on top of the initial four and it expands the number of paylines up to 50 for every two spins of the bonus feature.

The jackpot game is a random event on the reels. It can come following any spin. The jackpot gameplay is the same as in the Marilyn Monroe edition of the Gem Splash slots.

Players can play Gem Splash: Rainbows Gift as a free play demo at online casinos that host slots by Rarestone Gaming. This enables players to try the game with free credits and get a taste of the gameplay and features.

Is there a new series on the horizon? It may be so. The company should build on the success of these games as they are jackpot slots and have a decent payout potential plus a fun gameplay.

Find a proper casino that has Gem Splash: Rainbows Gift slots right from this page. Make sure you claim the welcome bonus and enjoy the paradise island theme.