Rarestone Gaming has made a five-reel slot with 30 paylines and a semi-dynamic reel adventure featuring the Hold and Win bonus game. Players can play Pearl Pearl Pearl slot for a chance to land six pearl symbols which will trigger the bonus game with four jackpot prizes can trigger with any spin. 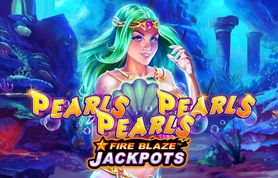 Playtech has released the game on its platform and the makers are the slot experts at Rarestone Gaming. This is an underwater adventure that takes slot players to a mystical world of sirens and pearls. It is no coincidence that the gameplay is marked by a win potential for four instant jackpots through the Fire Blaze feature.

The reel set comes with a layout of three rows and five reels that spin across 30 always-active paylines. As for the gameplay features, the Pearls Pearls Pearls slot doesn't come with any win multipliers, but there are wild symbols and there is the jackpot bonus symbol that can trigger the Hold and Win feature, which is a jackpot game.

The graphic design is perfectly aligned with the title of the game. The pearls are reflected through the jackpot symbol which is the one that carries cash prizes in the bonus feature that is mentioned just above. Landing your winning outcomes results in a burst of blue marvel, but strangely enough, big wins are celebrated by fireworks.

We aren't sure how that would work underwater, so Pearls Pearls Pearls slots can raise an eyebrow with its pretty graphic design and the light musical theme that accompanies the gameplay. The symbols are creatures from the coral, such as fish, luminescent jellyfish and turtles. Low paying symbols are royal cards.

The theoretical return to player is like a measuring stick according to which players can weigh the game's inclination of generating winning outcomes. This is not a definite way to do this, because, say an RTP of 96.00% means that the game can return a fair amount of your wagered money in the form of winning outcome.

The Pearls Pearls Pearls RTP has not been released yet, however, many pervious games by Rarestone Gaming in the same Hold and Win or if you will. the Fire Blaze category, have their RTP values at 96.00% or above.

As for the win potential, although the Grand jackpot prize states 2000x your bet, it is possible to land more because the bonus can trigger all four jackpots on the same sitting and the prizes that are attached to the pearl symbols are also taken on aggregate.

As per the usual, payouts are made for three symbols of the same kind. These need to land from left to right across one of the 30 paylines. Since Pearl Pearl Pearl is a multiline slot, it is possible to land multiple wins from the same spin.

Playtech and the makers of the game have warranted that this release is furnished with a wild symbol and a bonus symbol, however, a classical free spins bonus has been omitted, unlike in the Amazing Factory slot.

Nevertheless, most Fire Blaze Jackpot slots have the jackpot bonus only, which triggers with six or more pearl symbols in this case. In the event, players get three respins and each pearl that stays on the reel set resets the respins to three.

The Grand jackpot is awarded if the entire grid of 15 is covered in the jackpot symbol. The smaller jackpot prizes of the Pearl Pearl Pearl slot can land attached on random bonus symbols.

Players can play this Rarestone Gaming release on the go since the game works on both Android and iOS devices. Personal computers can easily load the game on any location that is connected to the internet.

The point of playing this Fire Black Jackpots title is getting to that feature of the game. As we said, six pearls triggers the bonus and each one that stays on the reels awards another three attempts to cover the grid with that symbol, in exchange for the 2000x your bet prize.

We think that most slot experts would agree that Hold and Win slots can be either excruciatingly slow and boring or extremely entertaining. It always depends on the game. Those who play Pearls Pearls Pearls will find it to be a game that has a slower pace than the usual and some players prefer that to slots that are speedy. Nevertheless, we think it's a decent game in terms of gameplay and we've got no bad thing to say about the maximum payout potential.