Money Train by Relax Gaming is considered an ultra-successful game. Its fame is owed to win multipliers that can cross-multiply in the bonus feature. Furthermore, the feature is one of the well-known Hold and Win bonuses where the respins are reset every time a win multiplier lands on the reels. Slots players can play for a chance to win up to 20,000x multiplied by the winning bet on this high variance reel adventure.

Climb aboard the Money Train slots and make good on that heist by betting for a chance to win potentially huge cash prizes.

Dry, parched soil, a mirage of red rock plumes and a heavy sun beating down on the train heist that is about to take place on the reels. This sums up the environment in which the players are going to find the Money Train slot.

Voted among the ten best slots for 2019, this Relax Gaming production is a thrilling wild west adventure that features stacked wilds and serious multiplier wins. Rugged players can shake out cash prizes of up to 20,000x on the winning bet and if luck ebbs low there is always the handy (but pricey!) Buy Feature that gets you the bonus in an instant.

Money Train rolls out on four reels and five rows. Wins are made across 40 always active paylines with three or more symbols of the same kind. These outcomes must start on the leftmost reel to count. The Money Cart Bonus is not an unfamiliar thing on the reels of many slots nowadays, so it is always welcome as an option because outcomes thereof could amount to sums that are worth counting. 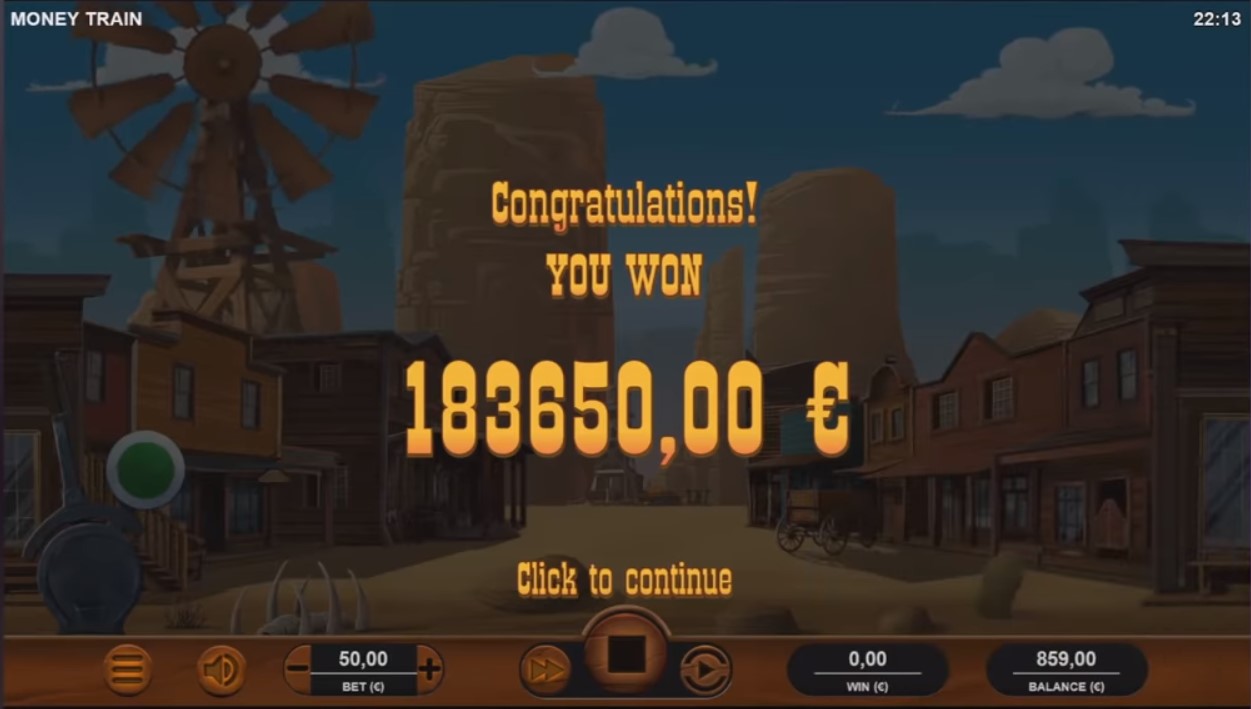 The following screenshot is of an actual big win on Money Train slot. Several big wins have been recorded, and a number of wins remain off-record, making it one of the most popular slots in 2019. Its popularity continues in 2020 for the same reasons.

The slots experts at Relax Gaming had made an engaging layout and gameplay. The premise is one that is fun to play on. It's a train heist related to all the big wins that the game is able to deliver.

For a reel-set we have a train wagon and one that certainly appears more advanced for that time. The lever in the bottom left is for the Buy Feature which pulls the chain down and this cranks up the cogs that you can see behind the woodwork.

A host of wild west personnel are available on the reels as the high paying symbols of Money Train slot. The low-paying are the card suits and there is a wild and a scatter symbol too.

The game is fully-animated, with the train composition moving with the triggering of a bonus feature and there are explosions too, with either a stick of dynamite, a bomb or a barrel of gunpowder, depending on how big the win is.

How to Play Money Train Slot

Relax Gaming have lined up all of the buttons at the bottom of the screen, underneath the reel-set. This is where the players of this online slot are going to discover the bet, play, fast forward, menu and other buttons.

To start the reels on the Money Train slots press the round button that is located right in the middle bottom. The sign has the universally recognized Play button which sets the game in motion.

Another way to play is by selecting the autoplay button, to the right. Press it to open up that menu from where you can choose the number of automatic spins and add optional settings that put limits on the money that could be spent during the autoplay mode.

How to Win Money Train Slots

The game has 40 paylines and symbol wins count with three of a kind, starting on the leftmost reel. Wilds substitute for any and  there is a bonus symbol that can trigger the game's free spins bonus feature.

Looking at the Money Train slot paytable we realize that the payouts aren't huge, however, as you play the game you also realize that what matters more is how they interact and also the number of wilds that you get, and of course, the frequency of the bonuses.

The most valuable symbol is the old man with the mustache. Five of a kind pay 20x on the winning bet, four pay 4x and three only 0.8x. The native man's symbol pays 10x for five, the Mexican pays 9x and the cowgirl pays 8x for five of the same symbols.

The bonus that we want to see is called Money Cart. Land three Bonus symbols on reels one, three and five to trigger it. Once you've triggered it the second screen lets you choose between the Persistent Collector and Persistent Payer modes.

The first choice reveals values on the stopping symbols and counts each one following the that spin. The second choice counts the amounts on the symbol as multipliers on the bet and adds it to all visible symbols.

Furthermore, if one of the renegades symbols appears on the reels, it adds additional value to the symbols and to the overall outcome. Each of these symbols modifies the amounts in its own way, and the symbol of the Mexican expands the reels.

Relax Gaming released their best production to date as a free play demo slot at online casinos that host demo games. This allows the players to test the game before playing it with real money.

Everything on this train rides on the bonus feature. Yes there are base-game wins, but if you are lucky for the bonus to trigger within a short frequency of spins you may see its benefits at work. Lucky players will see one or more of the renegades symbols stopping on the reels, which could amount to serious amounts for the multiplier value to post on the aggregate multipliers that post with the bonus symbol. We know that the maximum possible prize can rise to 20,000x on the winning bet.

Discover the Money Train slots by claiming a welcome offer right from this page and play at top shelf online casinos.

Is Money Train popular among players?

It was one of Relax Gaming's most successful games in 2019. Money Train was featured in multiple Top 10 Slots lists by reputable sources. Its popularity is mainly due to an unpredictably explosive bonus feature.

Can you play Money Train with bonus money?

The game is available at most good online casinos. Some welcome bonuses include the game as part of the offer. Several top-tier offers on this page are potential destinations that have Money Train slot.

What is the biggest win on Money Train slot on record?

A rumor has been confirmed by video that a slots player has won more than 160,000 GBP on Money Train.