Play for a chance to score 100x on the most lucrative symbol while in this wild west town safeguarded by Western Jack. The game plays on 10 paylines and has a layout of 3x5. Small bets start at 0.10 and the maximum bet pays 10.00 on each winning payline. Gamomat have included the sticky wild option in the free spins bonus and this brings a nice opportunity for making potential big wins. 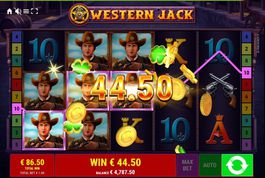 Play the Western Jack slots for a chance to win cash prizes and a stunning bonus feature that has sticky wilds. While it isn't quite as engaing as the Money Train slot, but it surely has a neat bonus feature.

Head to the saloon and play a casual Wild West themed slot by Gamomat that has a top cash prize of £10,000 on the maximum bet, or 100x multiplied by the winning bet.

Besides the grand prize, Western Jack slot has multiple symbols that can pay lucrative amounts for wins of three or more symbols of the same kind.

This adventure on the reels is set in a Wild West town where the usual things and events preoccupy the people. The sheriff and his trusty sidekick keep the peace in town, the money holds the golden coins, each person practices their right for an open carry and the distilleries churn out that fire water on the regular.

Being a Gamomat production, Western Jack doesn't deviate from their precept of keeping things simple. Indeed, simple this slot is, and that's just how some people like to play. The reel set offers three rows and five reels and there are ten paylines that are always-active.

Design-wise this is a signature game by Gamomat. It is usual for this company to make games with a 3x5 layout and usually they keep the number of paylines ten or twenty.

The reason why their slots are recognizable is likely because they like to use the same drawing and layout techniques. The same can be said about the wins. Gamomat slots, just like Western Jack slots, offer hefty prizes for the wild.

In the game at hand the wild is the sheriff. This symbol springs to life when it becomes part of a win outcome, so it isn't quite dull on the screen, except when there is little going on in terms of payouts.

Probably the area where these slots lack the most is the sound, as Western Jack, like so many other games, offers little to fill the silence between the spins.

How to Play Western Jack Slot

Set the game up by choosing the total bet and then you are free to either use the spin button or the auto, both of which make the reels turn.

All of the controls that pertain to the gameplay are at the bottom of the reels. The bottom left corner of the screen has the Total Bet amounts which can be changed by using the minus or plus buttons.

The smallest amount with which you can play Western Jack slot is only a tenth of a pound per spin. The maximum amount puts £10.00 on the payline of the game's ten active paylines, for a total bet of £100.00.

In the right bottom corner are three buttons. The purple raises the bet to the maximum level in an instant. The button to the right of it is to configure the automatic spins. When you click it a menu appears where you must enter the 'balance decrease' value if you want to utilize this mode.

You can enter any number here. The other conditions are optional and are balance increase, single win amount and bonus feature won. Once you have selected any of these options you can press the number to the right, which refers to the automatic spins that are about to be made.

If you prefer playing Western Jack manually you can simply push the green spin rectangle each time you want the reels to turn.

How to Win Western Jack Slots

Wins are made with three or more symbols of the same kind. The payouts can be viewed in the stable where there are also gameplay information, but since everything in the game is automated there is no need to read any of it.

The options in the menu are Spin With Spacebar and Automatic Feature Entry, which starts and plays the free spins on its own.

Our game has a simple bonus feature, but one which can be potentially lucrative as the big wins can really occur because of it.

The sheriff's star is the scatter. You need three to trigger ten free spins. One they've commenced, each time a wild pops up on the reels it will remain in place for the end of the bonus. Multiple wilds can post to the set and stay in place to interact with the coming symbols.

This is where the big win is quite possible.

The company behind this game are known for releasing demo slots so that the players can try their game of choice and then decide whether to play with real money. This is the case with Western Jack, because it is available at online casinos that host demo slots for registered players.

There is no use of saying it again, but here it goes: you aren’t going to be entertained with this game if that’s what you are looking for in slots with stunning graphics. On the other hand, a more toned down slot can make for a great gaming experience, especially thanks to the bonus feature with its sticky wilds and which can be retriggered.

Discover the Western Jack slots by claiming a welcome offer right from this page and play at top notch online casinos.

Does the Western Jack online slot have bonus features?

Lucky players can get a free spins bonus feature when three scatter symbols fall anywhere on the reel-set. The scatter symbol is the sheriff star, which grants ten spins. An added extra that wilds appearing during the bonus become sticky for the remaining spins.

What is the biggest symbol payout in the game?

According to the paytable, the most lucrative symbol is that of the wild symbol with 100x multiplied by the winning bet for five landing on a payline. Another valuable symbol is the cowgirl, paying 50x for five of a kind.

Are there any slots that are similar to Western Jack?

There are a number of games and we can single out few: Money Train slot, Gunslinger Reloaded and Tombstone. The last has been touted as one of the best slots of 2019.