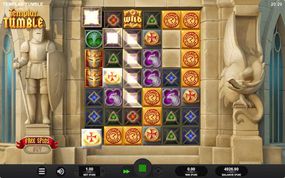 Templar Knights were amongst the most skilled fighting units in their time. The members that we’re not part of the fighting units managed to maintain a large economic infrastructure in the countries where Christianity was a dominant or prevailing religion. Relax Gaming has found the strength and inspiration to release the Templar Tumble slot, a medieval-themed game with 6 reels and more than 110,000 ways to win. Expect many tumbles, free spins and wilds that trigger mystery symbols worth at 1,000x your bet.

Relax Gaming leaves the reel action to the Templars in their latest slot game called Templar Tumble. This medieval strategy plays on 6 reels and 7 rows. A random number of positions on the grid remain blocked and change the payline system on every spin. As you progress during gameplay, the chances to hit a winning combination goes up to 117,649 if you unlock all reel positions. As for wins, you’ll need to match symbols anywhere on adjoining reels, starting from the left.

The Templars order will give you a chance to join in their quest at a bet level that starts at £0.10 and goes up to £20 per spin. You can use the + and – buttons to adjust your preferred bet level and define your win and loss stop limits. As for the main features introduced in the Templar Tumble slot, they offer you a chance to choose from mystery symbols and play with free spins that maximise your opportunity to trigger a big prize. The developer didn’t reveal just how big that prize might be, but seeing the volatility and overall math model, it should be quite attractive.

The visuals in the Templar Tumble slot are probably its strongest asset. Here, the reels are built in a medieval cathedral that looks like it’s made from the finest marble. As reels are the focal point in this atmosphere, they’re watched by a dragon statue and a Templar Knight. The music also complements the overall feel, sounding very dramatic and orchestral. Overall, this theme ticked all our boxes regarding visual appeal and excellent user experience.

On the marble reels, you’ll see lower value gemstones, the tree of life, eagle and a lion. You’ll recognise the authentic red Templar cross, along with the rings and helmets. The helmet is the most rewarding symbol, worth 2x your bet for six of a kind. The symbols might not be that rewarding compared to other similar releases, but you have enough space on reels to collect as many of those. The wild symbols serve as a replacement for other symbols on a winning payline. Also, it triggers the Mystery feature which we’ll discuss in a bit.

The theoretical RTP (Return to Player) percentage of the Templar Tumble slot is 96.29%. Being labelled as a highly volatile game, expect a few losing spins before you hit a decent prize. Considering the math model, we hope a win around 10,000x your bet, but since the developer didn’t reveal official stats, this might be different in practice. When you play this game, make sure to set your bets correctly to be comfortable with your gameplay. Here you can read more about the Variance, Volatility and RTP in online slots and see which one suits you best.

For a slot game that’s powered by the tumbling reel feature, it features few bonus games that should keep your attention. The Templar Tumble slot will also offer you a chance to choose from mystery symbols and play the free spins round with a retriggering option. Let’s see how they work in more detail:

As the title of this game suggests, this slot machine is powered with the tumbling reels mechanic. This means that each time you land a winning combination, winning symbols are removed, and new ones fall into place. Moreover, each tumble action also unblocks positions on reels and adds symbol on them. This will enable you to play with 117,649 paylines if all positions on the grid are unlocked.

This feature is triggered once a wild symbol falls on reel 2 through 6. Then, up to 8 blocked positions will transform into mystery symbols and remain on the grid until you get a non-winning tumble round. There are two possible scenarios to expect. The first one is the option to transform all symbols into the same matching symbol. Then, the slot mechanic will calculate your wins based on the symbols’ value. The second one is to turn all symbols into coins that might win you a prize of up to 1,000x your bet.

This feature is available once you unlock all blocked tiles on the grid. You’ll win 6 free spins while keeping the full 6x7 grid blocker-free. If you manage to land a wild symbol during these spins, up to 6 standard symbols will turn into mystery symbols. Then, the same rules will apply, just like we’ve explained in the Mystery Reveal feature.

Relax Gaming has made the Templar Tumble slot mobile-friendly to load on any mobile screen without any issues. The expanded reel size and moving blocks look good even on a smaller screen. Rest assured that you’ll get a top-quality design and a template that’s easy to navigate.

Relax Gaming has always been on their top-level regarding new releases. Their level of creativity, attention to details and devoted work don’t go unnoticed. They’re not afraid to experiment, and with their slot game called 10 Kings, they’ve shown that even a classic deck of cards can deliver action on those spinning reels worth 10,000x your bet. In partnership with Casinogrounds, they’ve released one of the top trending slot game in the time of writing this review, and that is Iron Bank. Make sure to check out which features have drawn the public attention, and why it is called “a slot game for players, developed by players”. Finally, if you’re a fan of neon, futuristic slot setup, the Amped slot is a perfect choice for you. With scatter wilds and four different free spins, this slot looks smooth from both graphic and mechanic perspective.

Templar Tumble offers an exciting visual journey to medieval times, with quality design and animations. You’ll look forward to the bonus games, as they deliver the most of this game’s reel potential. If you’d like to explore a different era when Knights were one of us, we recommend you spin the reels of this fantastic slot game by Relax Gaming.

Explore the Templar Tumble slot by claiming a welcome offer right from this page and play at top-rated online casinos.