Like most Megaways slots, the new version of Montezuma slot packs the maximum 117,640 ways to pay. Six reels are cut across by rows that can expand or contract between two and seven symbols. The wheel is a major part of the game as it can point to the number of spins and the multiplier amount. 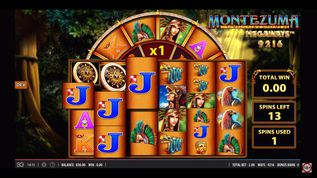 Discover gold in the jungle on the BTG adventure that takes a classical game to work it into the Montezuma Megaways slot. The game comes with a cascading payout mechanism on a maximum of 117,649 ways to pay. This entails a free spins feature and a wheel of fortune bonus where the lucky players turn the Aztec calendar into big win potentials.

SG Digital and their sister company WMS (Williams) have many online slots under their belt. Their foray into megaways slots has resulted in some remarkable slots such as Battleshit Direct Hit megaways. Next they have restored the glory of the Montezuma slot by partnering with Big Time Gaming to create the Montezuma Megaways slot.

Wins are made with three or more symbols on consecutive reels and there is the avalanche of wins which can result from a single spin. Montezuma Megaways has a welcome addition. Instead to the flat row on top of the reels there is a dial showing four symbols and underneath is another crescent that points to the multiplier number.

The new game is consistent with the design features of the original Montezuma. The color of the background on the reel-set is the same, brown-golden reminding of the gold that the Aztec king was famous for. Behind the reel-set is the jungle that we associate with the Aztec and Maya empires, which to this day yield traces of large cities that have been swallowed by lianas and foliage.

Montezuma Megaways slots keeps the range of symbols, but it doesn't do much to portray them in a crisper light. The same old, yet very exciting, golden ceremonial masks, feather crowns, eagles, the Quetzalcoatl deity, the princess and Montezuma the chief himself.

The card symbols portray the royal cards, which count for the low paying category. A musical theme is also there to create a mood for bushwhacking towards the hidden loot.

How to Play Montezuma Megaways Slot

The layout of the reel set and of the controls has Big Time Gaming written all over it. Like on the slots produced by that company, the bets, the spin button and the paytable and autoplay are on the right side of the reel-set.

The big green rectangle sends the reels spinning. Press once to deduct the bet per spin once for each turn. Above it and to the right, the game has the autoplay option. Configure it by selecting the number of automatic spins from the presets.

Select bets from the Total Bet window by using the left and right pointing buttons. The smallest bet is £0.20 and the maximum is in the manner of other BTG and megaways slots in general, at £20.00 per spin. There is a wide range of bets which makes the game playable with small, medium and large bets.

Montezuma Megaways slot has a BUY PASS which buys the bonus feature, albeit at a huge cost comparable to the active bet. On the other hand, the bonus games come at increased chances for a bigger win, or in other words, at a higher theoretical return to player.

How to Win Montezuma Megaways Slots

The avalanche/cascade wins can lead to subsequent wins from a single spin. This kind of payout mechanics is the balancing end of low payouts which megaways slots are always associated with.

The most valuable game symbol is that of Montezuma, with 25x for six of the same. This is a long-shot outcome, that is to say, it rarely occurs, and all the other payout values can only trigger slim pickings.

So our luck relies on the cascade wins. The players can get a decent win from a single spin, especially if there is more than a single, or preferably more than two symbol changes with the win.

The stepped pyramid is the game's wild symbol that substitutes for any, except the bonus symbol. The caveat is, in the Montezuma Megaways slot the pyramid turns up on the wheel above the reel-set.

The aztec calendar wheel is the bonus symbol that triggers the free spins when three of the same fall anywhere on the reel-set. In the event, the wheel above the reel-set spins so that the dial may stop on any number between 12 and 30. That many spins are then awarded.

In the free spins bonus Montezuma Megaways can unleash subsequent avalanche wins, and for each one a 1x multiplier is shown on the wheel. The multiplier can grow to an amazing 100x on the winning turn and this possibility can be aided when the bonus has been triggered by a higher number of bonus symbols.

The Return to Player (RTP) is a value which points to a ballpark percentage amount of bets that may be returned to the player following an indeterminate number of spins. This number gives players an idea how much they can expect to return from the game if they play it more than 100 spins. The Montezuma Megaways RTP has been listed at 96.17%. So if you bet 100.00 then 96.17 of that amount can be expected to return as an average.

It is expected that the game becomes available for free play demo in the period following its release. Also it will be available at online casinos that host demo slots to players with an account.

With a bonus guarantee on the free spins, the game offers a trade-off. Get a 30x multiplier in exchange for the wins if the amount you had won is lesser than 30x. This is a nice way to draw a random ploy for a chance to win more. Also the Buy Pass option is available to purchase three bonus symbols on the coming turn, and possibly more. This option may not be available in all jurisdictions.