A solar Eclipse, what a concept! This unusual natural phenomenon was worshipped and anticipated by Mayans, inspected and analysed by astronomers and described in a song sung by Bonnie Tyler. Although we are tempted to make an astronomical overview, or just throw a rhyme or two, today, we’re going to talk about a different eclipse caused by Yggdrasil. We’re introducing Ancient Eclipse – a new slot game inspired by the sun’s power and the moon. Find out how they collide in our detailed review below. 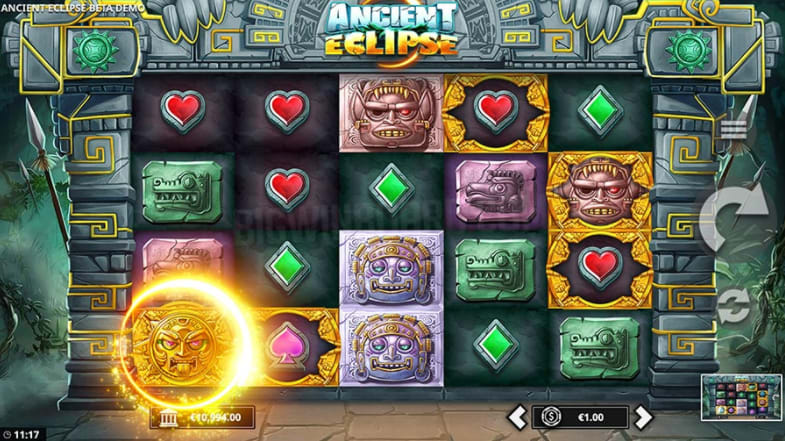 Partnering with Bang Bang Games, Yggdrasil Gaming is publishing a new slot game called Ancient Eclipse. Its official launch is scheduled for January 2021, but luckily, we got the chance to explore and test the template and in-game features. This slot’s theme relies on the Aztec culture, with symbols that feel authentic and typical for the genre. It is a five-reel slot with 50 active paylines. If you’re wondering about how this game forms winning combinations, you already know the process. To form a combination, you need to land 3 or more matching symbols on adjoining reels, starting from reel 1. So, are you ready to witness the nature miracle and see how it affects on the reels? Stay with us as we progress in this Ancient Eclipse slot review.

Bang Bang Games is about to fire a big shot with a slot that is a product of their partnership with Yggdrasil. The Ancient Eclipse slot is based on Mayan culture’s beliefs and traditions regarding this sky’s phenomena. Namely, they believed that demons were eating the Sun and Moon, aiming to destroy the Earth population when a solar eclipse occurs. Lucky for us, we’re still standing high even after three predictions of the end of the world.

The action takes place on a 5x4 grid with 50 active payline and a maximum win of 4,595x your bet from a single spin. Every potential move or trigger revolves around the sun frames, as your task would be to collect as many sun frames as possible. This is possible only with the option to land moon symbols on the reels. Every time a sun frame transforms as wild, you’ll land a larger win, and you’ll be one step closer play the bonus rounds.

The Ancient Eclipse slot is playable with betting options that range from £0.20 to £100 per spin. There is also an Autoplay option where you can select your preferred pace, enabling you to run between 10 and 250 auto spins. In this slot game, the maximum payout you can land is 4,595x your bet on a single spin. This excellent win potential comes from the multipliers in the Eclipse Feature, which we’ll discuss in short.

As we’ve already mentioned, Ancient Eclipse is inspired by the Mayan civilisation and their culture and beliefs. You can expect a rather primitive yet nicely crafted template with sharp and colourful visuals. The stone reels are carved with authentic patterns set in a foggy jungle vine.  You’ll be accompanied by the tribal rhythmical sound contributing to the game’s action and overall feel.

You’ll find clubs, diamonds, hearts, and spades as the standard low-paying symbols on the stone reel building. The tiger, eagle and crocodile along with two ancient gods, are the premium icons. Watch out for the god with a red ruby eye, as he’ll deliver 5x your bet for collecting 5 of a kind.

The Golden Sun is the wild symbol which serves as a substitute for all symbols on the reels except the Moon and the feathered crown. The latter represents the scatter, which triggers the free spins feature and appears only on reels 2,3 and 4. And of course, you need the Moon symbol to activate the Eclipse bonus feature.

The RTP (Return to Player) percentage of the Ancient Eclipse slot is 96.53%. That is above the average compared to other releases, and we’re glad about it. Keep in mind that the game’s variance is high, meaning that you’ll not land very frequent wins, but when you do, you’ll win a big prize. The game also comes with a decent hit frequency rate of 29,4%, which means that on average, every third spin is a winner. Plus, if you trigger the bonus features, you can end up winning up to 4,595 x your stake. If you want to learn more about different volatility models in slot games, check out our Variance, Volatility and RTP guide.

When it comes to Yggdrasil’s slot offerings, we’re used to playing slots rich in bonus features. However, with the Ancient Eclipse slot, things remain relatively simple and straightforward. Still, there are a couple of interesting features that don’t deviate the gameplay and theme, which is great. Here’s how they work:

If you manage to land a moon scatter symbol on the reels, that position turns into a sun frame and becomes sticky. This frame remains on the reels until a moon icon lands on that particular position. When the moon and the sun frame collide, you’ll trigger the Eclipse Feature. Here, all positions that include a sun frame and a moon symbol turn into wilds. If this feature is triggered with more than one Moon on the triggering round, you’ll be given a multiplier. For example, if two moons triggered the feature, all wins will be doubled. Once you use the wild symbol to form a winning combination, it will be removed from the grid.

This feature is triggered when you land 3 feathered crown scatters on the same spin. You’ll start this bonus feature with 12 free spins. During this bonus round, every wild landed on the reels will win you one sticky Sun frame, active until you’ve run out of free spins. If you land a moon symbol but still, don’t manage to trigger the Eclipse feature, the game will add +1 free spin to your total.

The Ancient Eclipse slot has been developed with HTML5, which means that the game can be played on mobile, tablet and desktop devices as standard. We recommend you flip your device on landscape mode, as you’ll have a better visual presentation of the reels. The quality of the design and graphics is clean, sharp and work well with the overall atmosphere. You can easily access the game on any Android, iOS and Windows device.

Yggdrasil is one of the most popular game developers in the past few years, always delivering top quality slot games. One of their latest winter-themed releases is Frost Queen Jackpots, bringing an innovative approach to bonus features and freebies in slot games. Since we are talking about the cold weather, this festive slot called Christmas Tree will surely warm up the atmosphere, since the maximum win is capped at staggering £1 million. However, this is not their only trending winter theme, as we’re sure you’ll love the design of Carol of the Elves slot. We hope you like our top three choices, so feel free to explore and read more about their features.

The Ancient Eclipse slot didn’t disappoint us regarding the design and mechanics. Once again, the developer delivered cutting edge design and engaging gameplay. The bonus features are sufficient, as it’s unnecessary to overstuff the theme and make it more complicated. If you are a fan of Aztec culture and slots dedicated to ancient tradition, try spinning the reels of this exciting Yggdrasil release. Good luck and play responsibly.

Discover the Ancient Eclipse slot by claiming a welcome offer right from this page and play at top-rated online casinos.