Brawl At The Redcap Inn Slot

Rumble with a group of trolls, goblins and Viking warriors in this fantasy slot from Yggdrasil Gaming. Brawl at the Redcap Inn is a Dual Reel, 100 payline slot game offering twice as much fun. It comes with decent extras including the Wild Swap feature that helps you win on both sets of reels simultaneously. There’s also a Held Wild Free Games feature where all wilds turn sticky. In total, you can win 9,674x the stake. Find out more in our full Brawl at the Redcap Inn Slot Review. 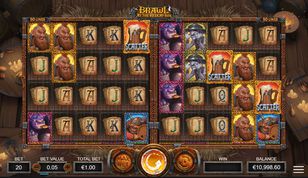 Yggdrasil and Dreamtech Gaming collaborated to produce a dual reel slot machine called Brawl at the Redcap Inn. Being a dual reel slot means that you’ll play on two sets of reels, so everything is doubled. You’ll benefit from two bonus features that deliver payouts of up to  9,674x the stake.

If you’re interested in learning more about this medieval/fantasy slot game, continue reading our Brawl at the Redcap Inn Slot Review. 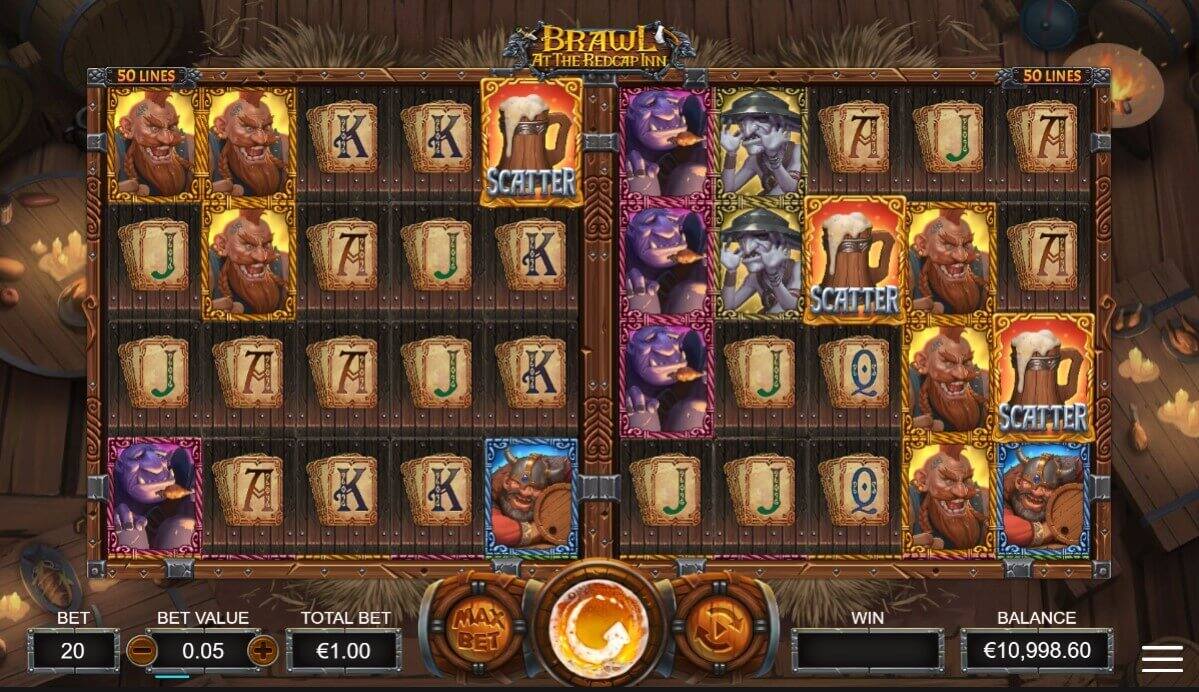 About Brawl at the Redcap Inn Slot

Brawl at the Redcap Inn is a new online slot from Yggdrasil and Dreamtech Gaming. As you can see from the screenshots, the game plays on two reel sets where all rules apply equally. Both sets have 5 reels and 5 rows, with 50 paylines.

To play the Brawl at the Redcap Inn slot, you have to adjust your stake levels according to your preferences. This game accepts bets that range from £0.20 to £40 per spin. Winning combinations are formed by landing 3 to 5 matching symbols on a payline, from left to right. The same applies to both reel sets.

Placing trolls, goblins and Vikings in the same pub is an indication for trouble, and that’s exactly happening in the Brawl at the Redcap Inn slot. As such, the slot is boosted by two bonus features that deliver prizes of up to 9,674x the stake - Wild Swap and Held Wild Free Games. Check below to find out how to trigger them.

The design of the Brawl at the Redcap Inn slot is exceptional. It has a medieval/fantasy theme and the gameplay is set inside a pub called Redcap Inn. The symbols are the only characters in this game that deliver fantasy vibes and remind of a “brawl”.

Due to the dual set of reels, there is not much place left for the game’s background design. Still, you’ll notice wooden floors, wooden tables, and a couple of candles. The soundtrack is lively and perfectly fits the theme. 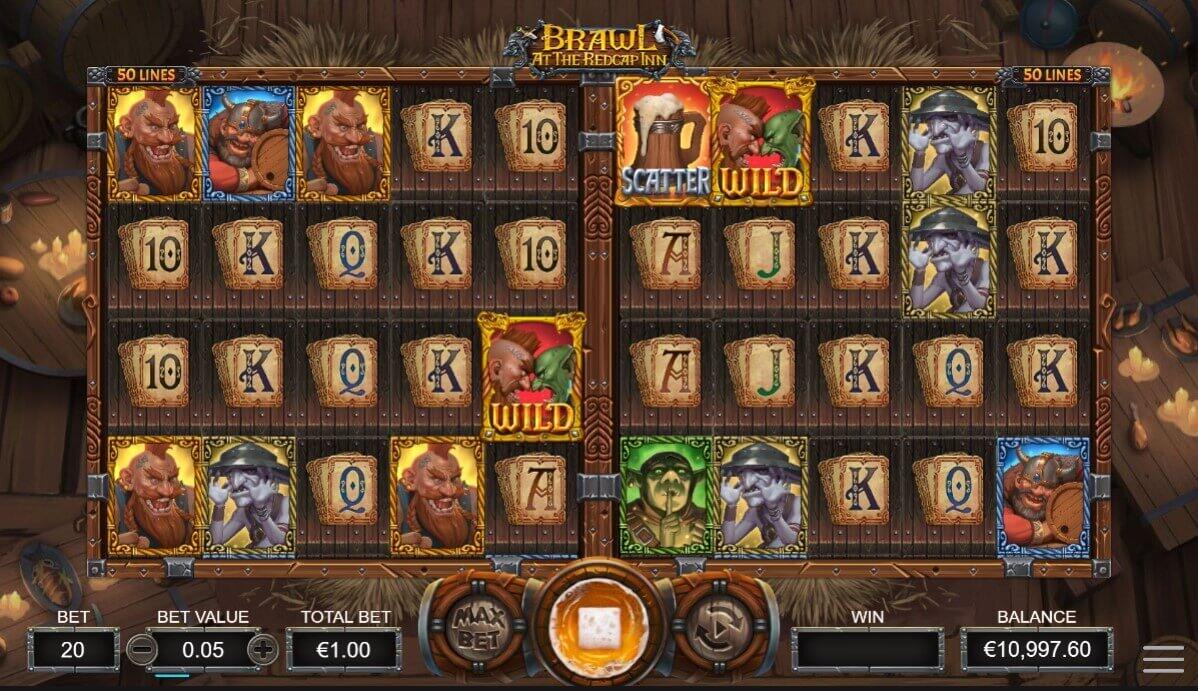 The wooden reels are filled with different types of symbols. At the low end, we have 10, J, Q, K, and A Royals. When it comes to the high-value symbols, they include goblins, orcs, trolls, and Vikings.

Furthermore, the Brawl at the Redcap Inn slot has a wild symbol that can land anywhere and substitute for all regular symbols. It also triggers the Wild Swap Feature. Finally, the mug overflowing with ale is the scatter that triggers the Held Wild Free Games Feature.

RTP, Variance and Payouts for Brawl at the Redcap Inn Slot

As you might’ve expected, the Brawl at the Redcap Inn slot is highly volatile with an RTP of 96.04%. This means that you’ll benefit from less frequent but more valuable payouts, with the maximum prizes coming from the bonus features.

The hit frequency rate is 36.38%, so on average, you’ll land a winner on every third or fourth spin. In total, you can win 9,674x the stake. If you’re interested in learning more about different variance and RTP models in online slots, check our Variance, Volatility and RTP Guide.

Gameplay and Features on Brawl at the Redcap Inn Slot

Brawl at the Redcap Inn has dynamic gameplay and it plays out on 2 reel sets, each one containing 5 reels and 5 rows. Central to the gameplay are duplicating wilds that move from one grid to another. Besides them, you have the free spins round where the maximum payouts can be achieved.

Here are the bonus features:

Any time you land a wild symbol on one reel set, it will duplicate itself to the equivalent position on the other reel set. This is called the Wild Swap feature. If you land wild symbols on the same position on both reel sets on the same spin, they will turn into 5x multiplier wilds. 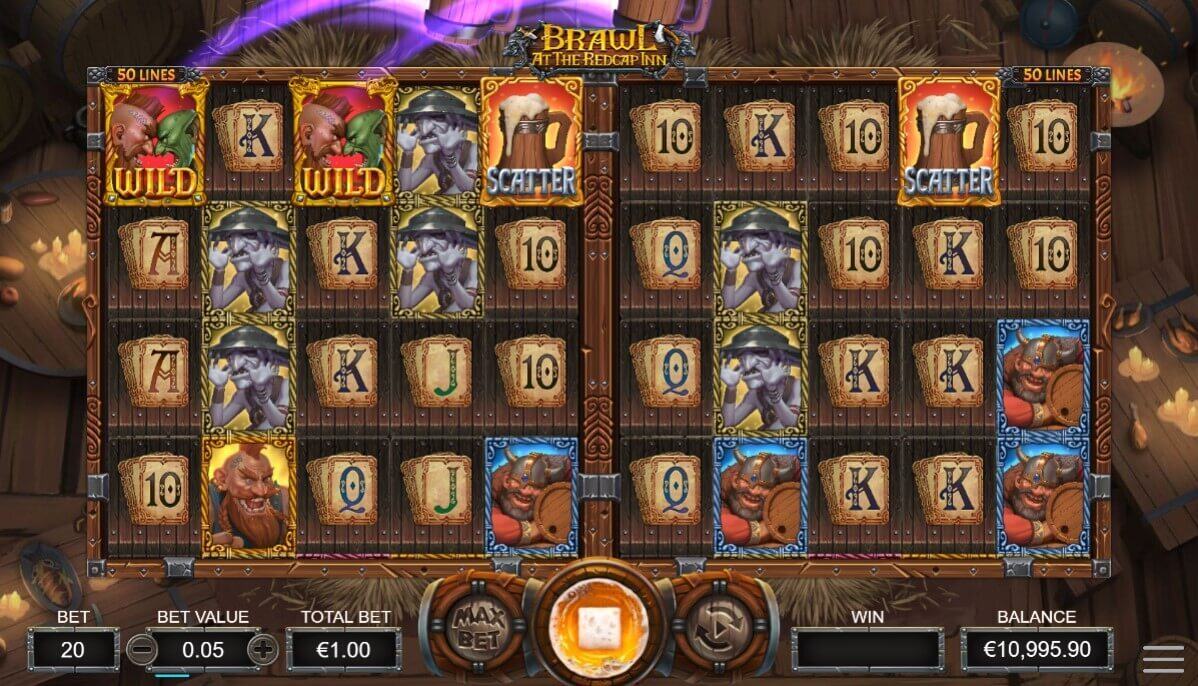 Just like in the base game, the Wild Swap feature is active during the Free Spins too. So, you can also benefit from duplicating wilds and 5x multipliers. But, whenever a wild symbol lands during the Free Spins, it will turn sticky and remain locked for the duration of the feature.

The Held Wild Free Games feature can be retriggered by landing 5 or more scatters on the same free spin. You’ll then also receive 10 Free Spins to play with. 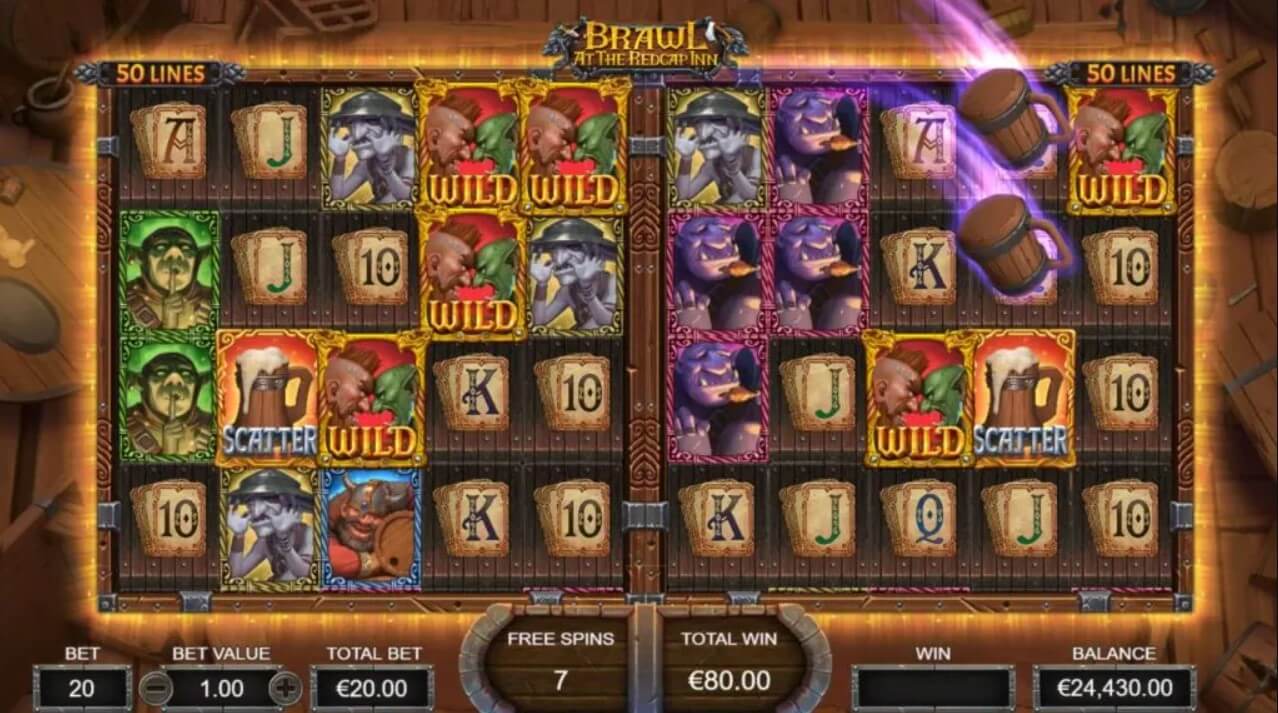 Brawl at the Redcap Inn Slot on Mobile

Brawl at the Redcap Inn slot is built with HTML5, so it’s available to play on mobile devices. This medieval-themed slot is compatible with all operating systems so you can easily access it on the go. No matter what device you use, you’ll receive the same high-end experience.

Yggdrasil is an established developer with an ever-growing portfolio of high-end slots. The provider has been pretty active recently and released a number of products. So, here are some of Yggdrasil’s newest slots.

PapayaPop - it’s one of the latest Yggdrasil releases that feature the PopWins mechanic. With unlimited free spins and progressive multipliers, you can end up winning 10,542x your bet on a single spin.

Golden Gorgon - it’s a Greek mythology-themed slot that comes with decent features, suitable for beginners. Our favourite is the Golden Gaze feature, which increases the chances of potential winnings while respinning.

Super Cash Drop - it’s a luxurious, cash-dropping slot with a lot of reel action. There, the grid can randomly increase from 5x4 to a 5x8 setup, resulting in 502 active paylines. Wild symbols deliver re-spins and multipliers, while the Free Spins round pays up to 20,000x the stake.

Yggdrasil and Dreamtech Gaming did a great job with the Brawl at the Redcap Inn slot. It’s an impressively designed game, with excellent features and high payouts. The introduction of two reel sets makes the gameplay more exciting. On top of that, the base game is boosted by duplicating wilds, delivering chances for bigger payouts.

Discover the Brawl at the Redcap Inn slot by claiming a welcome offer right from this page and play at top-rated online casinos.