Watch the two Viking armies clash on the reels in the Viking Smash slot from Stakelogic. The game plays on 5 reels and 243 paylines that pay both ways. Keep an eye out for the blue-haired and red-haired Viking warriors that appear as walking wilds and give re-spins. The walking wilds are also the key to triggering the Free Spins round from which you can win £389,000 at most. Find out more in our in-depth Viking Smash Slot Review below. 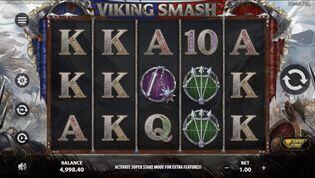 To show you how it was like to battle with Vikings, Stakelogic has released the Viking Smash slot. This game is filled with swords, axes, and warriors ramming into each other. Central to the action are the blue-haired and red-haired warriors that lead you to the bonus features. 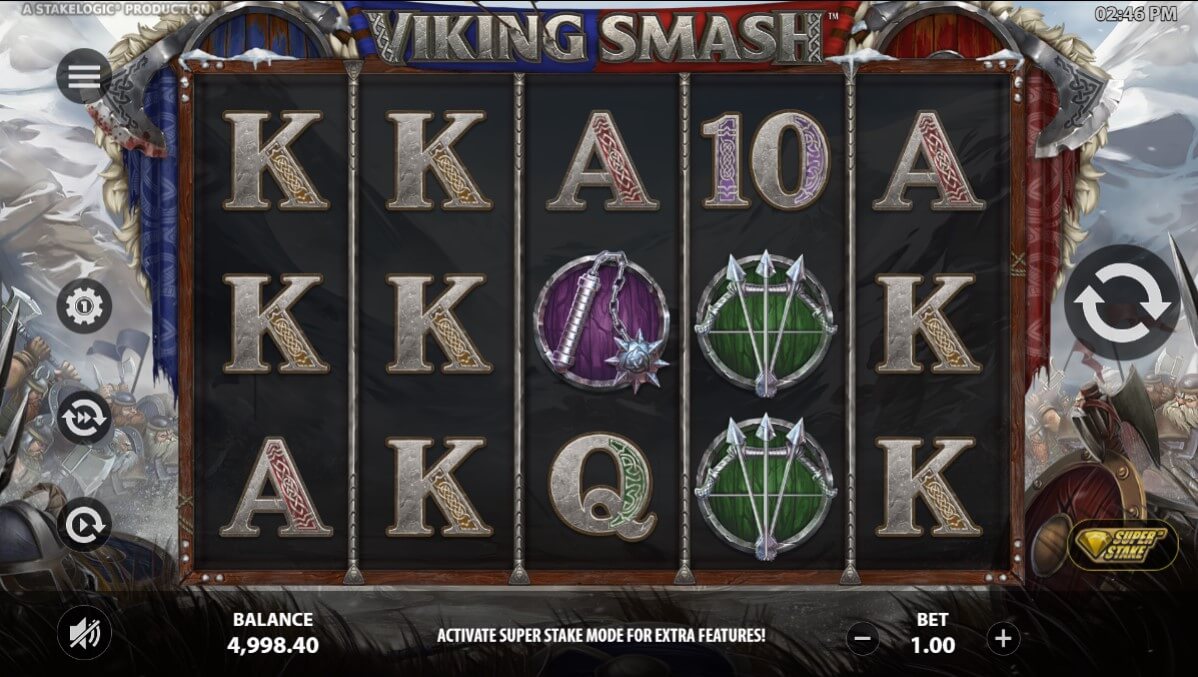 The Viking Smash slot comes with Walking Wilds, Free Spins, and Stakelogic’s signature Supe Stake feature. Below in our Viking Smash Slot Review, you’ll find all the important details you need to know about this slot machine.

Viking Smash is a new online slot from Stakelogic. As its title suggests, it has a Viking theme so you’ll find a lot of action on the reels. The game plays on 5 reels, 3 rows, and 243 paylines. What’s great about this slot is that the paylines pay both ways, so you can land winning combinations both from left to right and from right to left.

You can join the blue-haired and red-haired Viking warriors on the reels as soon as you place your bet. The game accepts different betting options that go from £0.25 to £125 per spin. Therefore, it is suitable for both casual players and high rollers.

It’s more than obvious what the theme of the Viking Smash slot is. The game’s main theme is Norse mythology, dedicated to the Scandinavian seafaring warriors. Stakelogic designed a very beautiful slot with attention to details and high-quality graphics. 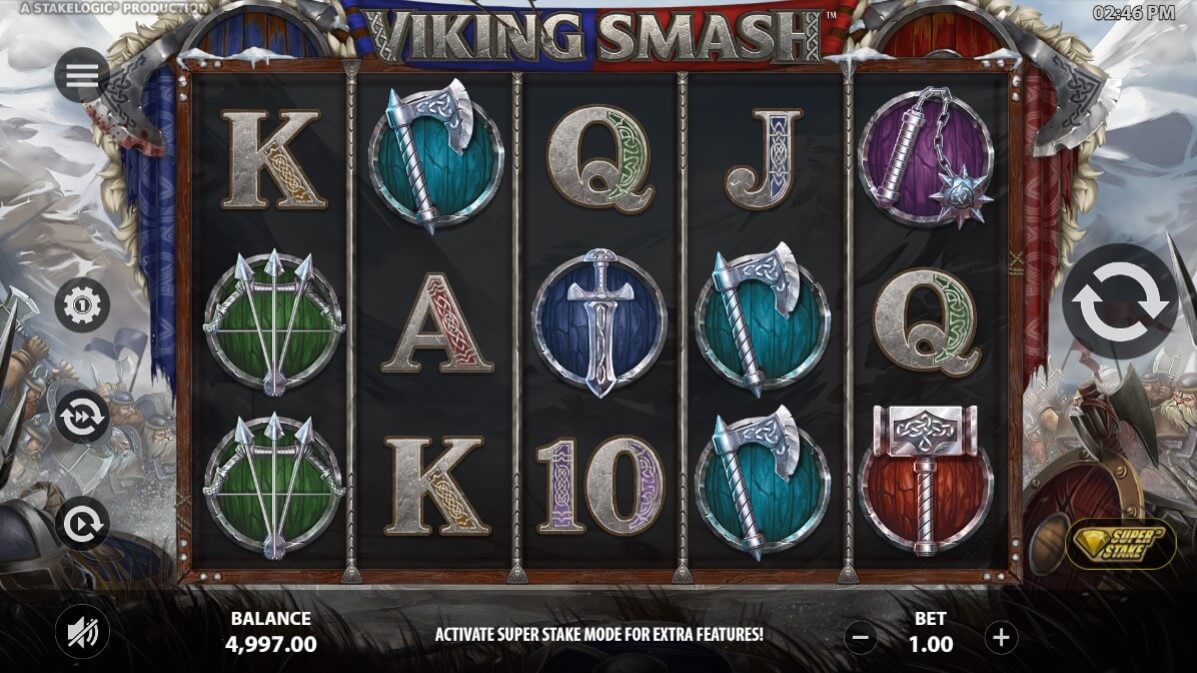 In the background, you’ll notice mountains covered in snow. The left side of the game grid is designed with blue, while the right side is red. These colours are dedicated to the two Viking armies, led by blue-haired and red-haired warriors.

As we move on to the paytable, you’ll find the low-paying, Norse-style Royal symbols - 10, J, Q, K, and A. Then, the high-paying symbols are designed as swords, bows, morning stars, axes and hammers. The two warriors act as Walking Wilds. They trigger the Walking Wild feature, as well as the Free Spins feature.

The Viking Smash slot's RTP is 95.60%, which is a little below the industry average of 96%. In addition, the variance is high so that the bigger wins will come from the bonuses and in-game extras.

The Viking Smash slot comes with the Super Stake feature, which is the signature of Stakelogic. It can be activated as soon as you start the game, but keep in mind that it will double your bets per spin. During your spins, you can also trigger the Walking Wilds feature, as well as the Free Spins. Let’s see how these features work in more detail.

The 2 Walking Wild symbols can land on reels 1 and 5. Whenever they land, they start walking towards the opposite edge. Each step they make will give you a re-spin. The respins end when no more wild symbols appear on the reels. 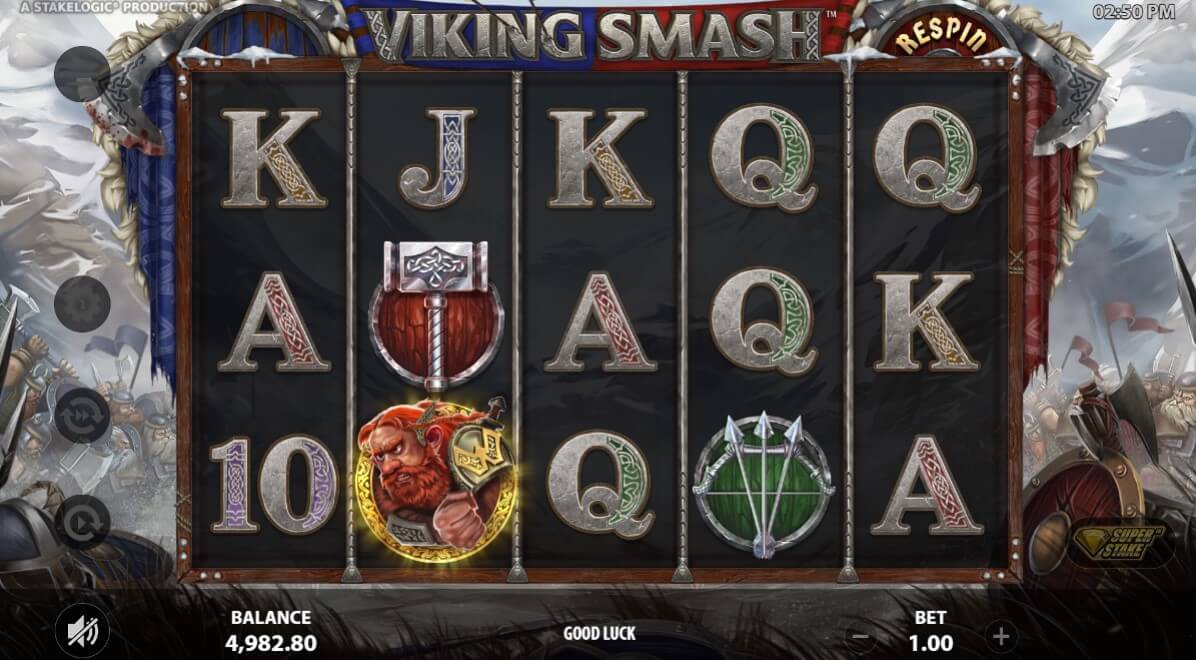 In addition, the Walking Wilds feature is the key to triggering Free Spins. Namely, when 2 walking wilds meet at the same row, you trigger the Free Spins bonus feature.

As mentioned above, the Free Spins feature is triggered when two Walking Wilds are next to each other on the same row. Then, you’ll receive 10 Free Spins. You also win 4 extra spins per extra pair of walking wilds that meet on the reels. During the Free Spins, the Walking Wilds can land on all reels, not just on reel 1 and 5. 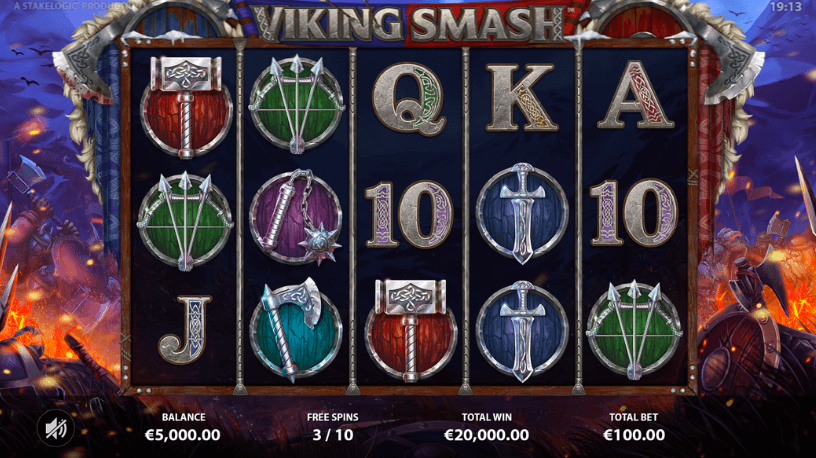 Before you start to play the Viking Smash slot, you’ll be given an option to play with an active Super Stake feature. This feature doubles your bet of each spin. When Super Stake is active, an extra feature known as Random Wilds may trigger. Tris results in higher chances of bigger wins.

Furthermore, on a random losing spin, you can get 2 to 6 wild symbols that appear on reels 1 and 5. This can lead you to the Walking Wilds feature. 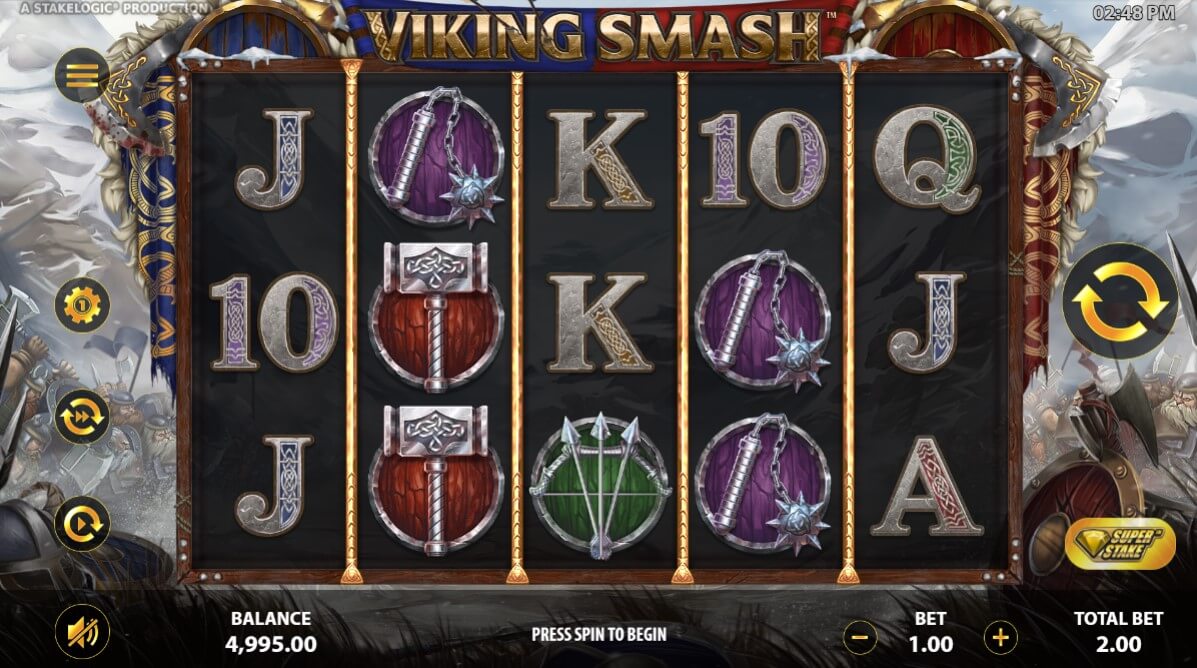 The Viking Smash slot is mobile-friendly, and you can play it on any mobile and tablet device. It is developed with HTML5 and can adjust to any small screen, on any operating system. You’ll receive the same high-quality design and seamless user experience when playing on a mobile device.

Feel free to check out some of Stakelogic’s previous releases and compare the themes and gameplay.

Dracula - This online slot is played across 5 reels with 25 active paylines on every spin. While the atmosphere of this title is quite tense and uptempo, it still is a medium-low volatile game that comes with extra wilds, a Pick Me bonus game and a generous Free Spins round.

Mayan Rush - It’s a 5-reel machine with dynamic and static positions that wait to reveal high-paying symbols. During the game, you’ll play with more than 3,000 ways to win, trigger the Multiplier Respins feature, or play with the randomly activated Super Stake option.

Gods of Secrecy - This highly volatile slot is taking you on another Egyptian adventure where you’ll meet some of the greatest Egyptian Gods. There, you’ll be able to take advantage of the free spins feature, as well as the Pyramid of Secrets features with three jackpots and payouts of up to 5,000x the stake.

Viking Smash is a great online slot that deserves a try. Even if its RTP is below the industry average, the game delivers a top-notch reel experience with lots of action. To win big, you need to land the Walking Wilds that will start moving towards one another, deliver re-spins, and potentially trigger free spins. Good luck!

Discover the Viking Smash slot by claiming a welcome offer right from this page and play at top-rated online casinos.

Brawl at the Redcap Inn