Let the lizards hunt flies and add 1x multiplier on each reel for each wild during the free spins bonus. The Multifly! slots by Yggdrasil takes the players to a jungle that can lead to a maximum payout of 10,000x. The payout mechanics is cascading wins, which comes with a high volatility and a theoretical RTP of 96.30% 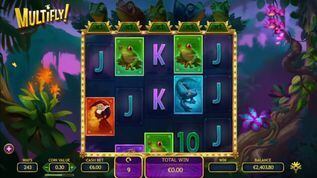 Yggrasil feel at home in the woods, not only because of the name which they've assumed. The Multifly! slot takes place under the jungle's canopy, which is a breeding ground for flies, lizards and multipliers.

You have have scoped out the pun between Multiply and Multiply. The name gives it all away: we have a gameplay where the multipliers and wilds go hand in hand, and which can post on each individual reel of the five available.

The game has five reels and three rows, however these spin across 243 ways to win, which translates to payouts that can arise only from consecutive reel wins, and starting on the leftmost reel.

Multifly! has a dynamic base-game action which is the spring-board from which it can trigger the free spins bonus, which is where the jungle magic can happen, because in the bonus the multipliers on cascading wins don't reset like in the base game.

Yggdrasil have made a rather neat game that has a small reel-set which they placed to a background offering vibrant vegetation. Still, the reel-set suffices even with this ratio, as it fits its three rows and five reels.

The slots experts had included an exciting array of gameplay features that are represented by a good number of moving parts, such as reptilian tongues flying down to the Wilds to tap down the flies. No wonder the name of the game is Multifly! slots.

How to Play Multifly! Slot

The game starts with the push of the spin button which can be found in the middle-center area of the screen, just underneath the reel-set. You can tap or press that button once and this will deduct the selected bet per spin from the balance once.

Multifly! slot has an autoplay mode which you can configure for a hands-free adventure. The button that we need in order to get this done can be found to the right of Spin.

Press it to open up the menu where you can either select one of the automatic spins presets or do that and add an optional control that stops the mode upon a specified balance increase, balance decrease or at the start of the bonus feature.

To select the bet per spin, browse through the Coin Value window which can be found in the bottom left corner of the screen. Use the minus and plus buttons to view the coin sizes, which start at half of a penny, which is quite common in Yggdrasil games to up to 2.00, which produces the maximum bet of 40.00 per spin.

There are few other buttons that you can make use of. You can toggle on the turbo mode and you can view the paytable from the menu button.

How to Win Multifly! Slots

The 243 ways to win comes with a cascading payout mechanism which causes consecutive wins for any combination of three or more matching symbols, with or without the help of the wild symbol.

The free spins bonus offers an upgraded gameplay in this regard, which is more inclined to make bigger payouts, thanks to the multiplier hold feature.

As it is customary, cascading wins slots have symbol payouts that are much lower compared to slots that make standard payouts. So it is a small wonder that the most valuable of the regular symbols, the parrot, only pays 4x multiplied by the winning bet.

Needless to say, the multiplier ability that is part of the Multifly! Slot strikes a balance between the low symbol payouts and the game's maximum win potential.

An extra feature happens with the wild symbol, which can appear randomly following any cascade win, but also, wilds that fall with the initial spin trigger another feature, which adds a x1 multiplier on top of that reel. Each wild that comes with subsequent wins will increase the multiplier value by +1.

The main feature on the Multifly! slots however are the free spins. Three scatter symbols falling on the three reels in the middle start you with ten spins. The kicker with the bonus that isn't available with the base game is that the multipliers on the reels remain for the duration of the free rounds, regardless of whether there are cascading wins or not.

This is the main feature of the game and the reason why it is called Multifly! slots. The multipliers are added on each of the respective reels whenever a wild symbol stops there. Arguably, the multipliers can rise infinitely, especially in the free spins bonus feautre, as the spins can be retriggered.

It is very possible that the multipliers rising to amounts that are greater than the usual, more than 5x may impact on the game's theoretical return to player, but this is just in theory. The maximum payout amount of 10,000x is only possible when all five reels are showing the theoretical maximum multiplier value. The slots playing public has picked up on the game by now, so it is going to be interesting to see if any videos appear offering a look into the big wins.

The game's theoretical return to player is above average and stands at 96.30%. It is likely that this RTP varies between the base game and the free spins bonus, because the latter comes with increased odds at triggering a greater frequency of multipliers, therefore nudging the outcomes higher by way of improved odds. Overall, the RTP being above average is a good sign that Multifly slot has high wins capacity over a longer period of play.

Yggdrasil are known for releasing their online slots as free play demo slots for the players who first want to try a game before playing with real money.

The game at hand has a high volatility and a low hit frequency, which means all of the potential payouts are delayed for a possible big win. The theoretical RTP is 96.30% and the maximum payout which can result from a single spin is 10,000x.

Discover the Multifly! slots by claiming a welcome offer right from this page and play at top notch online casinos.

What is the maximum payout potential of Multifly! Slot?

The theoretical maximum prize that can occur from a single spin in Multifly is 10513x multiplied by the winning bet. This is, however, a very rare occurrence even though the game has high variance and a big win potential.

Why is Multifly! by Yggdrasil Gaming popular among the players?

The game's popularity is based on the extra feature. The base game can trigger multipliers, however, the free spins bonus can also do the same for each reel. The multipliers can raise in value and remain sticky on the reels for the duration of the bonus.

What triggers multipliers during the free spins bonus?

Each wild symbol adds 1x multiplier for the respective reel. The multipliers can increase in number but not go in reverse during the bonus.