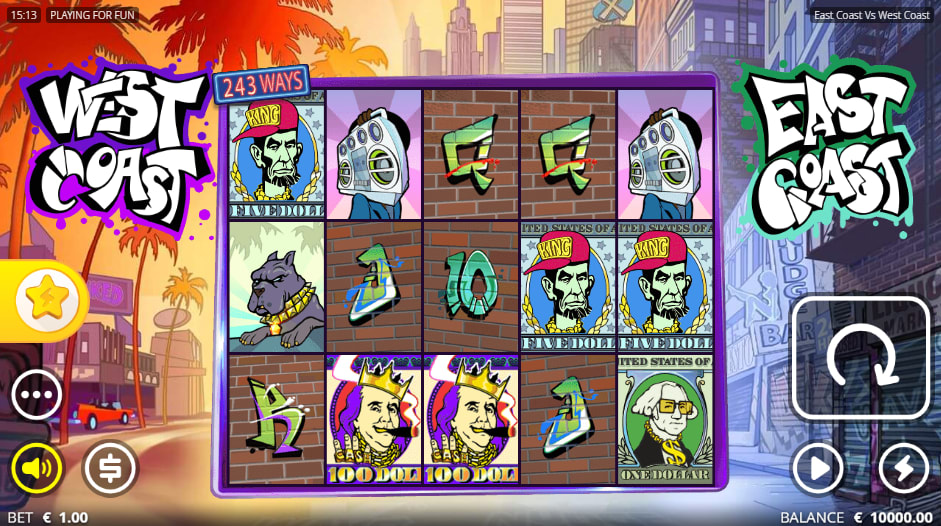 From New York to L.A, Nolimit City is back with another reel adventure called East Coast vs West Coast.  Staying true to their Punk Rocker vibes, this bold and brave slot developer never cease to amaze us with their authentic touch and innovative gameplay. You can notice the coast rivalry even in the bonus features, as you’ll have a chance to opt-in for one of them and play for 30,618x your bet. As soon as you can rap nudging wilds, progressive multipliers, expanded symbols and linked symbols, we’ll take you down to the gameplay and story behind this impressive slot release.

If you’ve been closely following the development and growth of the mainstream music industry, you’ll know the story about the beginning of East Coast vs West Coast hip hop rivalry. This was a feud between fans and artists of the East Coast and West Coast rap scenes in the US, especially during the mid-90s. The main protagonists were the East Coast-based rapper The Notorious B.I.G and Tupac Shakur, the West Coast representative. Nolimit City did a great job in representing the two most influential hip hop movements, both keeping their authentic style and identity in the features. The East Coast vs West Coast slot is played on 5 reels, 3 rows and provides 243 ways to win. This number can go up to 84,375 if you activate the expanding reels feature, which we’ll discuss in short. To win, you need to land at least 3 matching symbols on a payline, starting from the leftmost reel.

But before you blast that boombox, make sure to adjust your preferred stake level of between £0.20 and £100 per spin. Click on the dollar symbol just below the reels to adjust your settings. When it comes to the bonus features and extras, well, you can bet there are helluva lot. From respins to free spins, wilds and multipliers, they can pack a proper win of up to 30,618x your bet.

As soon as you start the East Coast vs West coast slot game, it doesn’t really matter which side you are. The creative team at Nolimit city have put a lot of effort into the visuals, music and graphics to deliver an authentic 90s atmosphere that also feels modern. Along the blasting boomboxes and colourful graffiti, you’ll notice to two sceneries from both sides of the reels. The overall design is in one world amazing, and you can tell that designers and coders have paid a lot of attention to details that make the gameplay even more engaging.

On the reels, you’ll meet A-10 graffiti symbols alongside a ghetto blaster, a pit-bull, and the president trio of George Washington, Abraham Lincoln and Benjamin Franklin, all pimped for a dollar bill portrait. President Franklin is the highest-paid symbol that can win you 7.5x your bet for five of a kind. The golden ring acts as a wild symbol and substitutes all symbols except the scatter.

The theoretical Return to Player (RTP) percentage of the East Coast vs West Coast slot is 96.04% which is straight up the industry average. Also, the game’s variance is extremely high, rated with 10/10 from the developer. This means that wins will come around less often, but they’ll surely be big once they occur. Make sure to set your bets properly before you take your game on the reels. The hit frequency is over 30%, meaning that under one-third of spins on average would be winning ones. Speaking of wins, the maximum payout in this slot game is capped at 30,618x your bet per spin, which means that these hip-hop beats can be worth millions if you play with the maximum stake. However, if you’re not comfortable playing on highly volatile slots, make sure you set your bets correctly and gamble responsibly. Here you can read more about the Variance, Volatility and RTP in online slots and see which one suits you best.

Gameplay and Features on East Coast vs West Coast Slot

And now, as we’ve promised, here comes the crew of bonus features that spice up the gameplay of the East Coast vs West Coast slot. For now, we’ll tell you there are 5 different enhancers, 3 different free spins rounds and xWays triggers that give the reels a whole new feel while you spin them. Let’s not waste time and get our hands on those:

This feature is triggered as soon as you land 2 scatters on the same spin. You’ll play one respin where one of the enhancers we’ve explained above will be active.

If you’re lucky to land 3 or 4 scatter symbols in one spin, you’ll win 8 or 10 free spins respectively. Before you start the round, you’ll get to choose from East Coast or West Coast Spins. Have on mind that East Coast Spins land the Infectious xWays symbol on every spin. Above the grid, there’s a bar where the first two positions from the left are locked so enhancers won’t land there. But, if you land an additional scatter, you’ll add +2 free spins and unlock one of the positions. If you open all bar positions, or land 5 scatters on the grid, you’ll transform the East Coast game into Coast to Coast spins. During this feature two enhancers land on the reels simultaneously, significantly contributing to your win potential.

West Coast Spins are almost identical to the East Coast ones. The only difference is that here we have the last two bar positions blocked. Infectious xWays enhancer is not available here, but the remaining four enhancers are active and will significantly contribute to your gameplay.

You’ll receive the same quality design of the East Coast vs West Coast slot when you play it from a mobile device. The game is built with HTML5 which ensures that you’ll receive cutting-edge gaming experience. You can easily access the game on any Android, iOS and Windows device where it will perfectly adjust to your screen.

When it comes to Nolimit City and their slot game portfolio, they’re always in the spotlight as one of the best and most innovative slots on the market. Check out their previous slot featuring the xWays mechanic called San Quentin. This notorious slot game has by far the best payout potential we’ve covered until now, capped at astounding 150,000x your bet. See whether you’ll handle with the drama and fast-paced gameplay. Now, we’ll move to an Egyptian themed slot that offers sticky wins and pyramid wilds for a chance to win more than 20,000x your stake. Enter the Tomb of Akhenaten and experience the mystic, rich feel of its design. Or, open the Book of Shadows for a spooky, thrilling experience where the zombie girl will lead you to exciting bonuses and impressive wins.

The East Coast vs West Coast slot was an exciting title to test and explore. We were caught up by the vibrant, quality design and bonus features that feel a little overwhelming, but in a good way. The developer once again proves that there’s more than just another retro or ancient-themed title when it comes to slot themes. We bow down, drop the mic and warmly recommend you spin the reels and choose your best offer at one of our featured casinos.

Claim a welcome offer and discover the East Coast vs West Coast slot at our featured online casinos.