Players can discover a layout of three rows and five reels that spin across 30 paylines. Wins are made with at least three matching symbols on a payline and bets can be made with a rather steep 1.20 per spin, at Australian casinos, and possibly lower amounts in other regions. The theoretical return to player of Viking Reign is 96.62% and the variance is high. 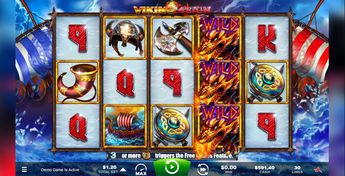 Ainsworth are the Australian slots experts who do have a touch with realm of the Norse. Their Viking Reign slot seems perfectly fit for a great reel adventure that involves the high seas, golden amulets, yelling horns and a set of features that binds everything together. The game was released in 2020 and is available both at online casinos and land-based casinos.

Viking-themed slots are always fun to play for some reason. We can't know if it is the Vikings television series or the game of the same name (Vikings slot) that made a name for all other slots. The theme does a solid job in grasping the thrill of sea voyage and the fierce weaponry of the exploring tribes.

Players can get the help of two wild symbols to replace any of standard symbols, and a free spins bonus that can trigger with three or more scatter symbols, towards payouts of up to 2400x.

In terms of graphic design, the slots experts at Ainsworth have taken to the 3D drawing desk in order to create the set of high-paying symbols. Each one of these represents an object from the Viking inventory: Gjallarhorn, a Viking ship, a battle axe, a shield, and so on. There is also a fire-breathing dragon, as it too is part of the folklore of the Norse region.

Viking Reign slots comes with dynamic play that can get engaging with the help of the visual effects. The bonus symbol inspires an electric current to wrap the reels where it is anticipated to land in another position, while winning outcomes are marked by a blizzard in the back of the symbols. The dragon jumps to life to breathe fire, which is the highest example of why the game doesn't leave anyone bored.

How to Play Viking Reign Slot

Playing the game requires to first select one of the amounts from the Total Bet selection. This is the range of bets that enables players to wager against the house.

Because Ainsworth is an Australian provider of games, the range of bets between $1.20 and $48.00 per spin reflects that market's currency, so those who play the game in Canada, US or in European countries are likely to find different amounts.

Once you've made your selection you can press the green Play button, which can be found below the third reel. To the sides of that button are buttons for Max Bet, which cranks up the following spin for the maximum bet, and the fast forward button, which opens up the autoplay menu.

The latter is one mode in which players can make the spins, instead of manually pressing the play button for each turn. Autoplay enables players to let the Viking Reign slot make the spins on its own. The automatic spins presets are between 10 and 100 spins.

Last but not least, the menu button can be found in the bottom left corner of the screen. This is where players can toggle on or off the sound, view the paytable and the game rules, which isn't necessary to do in order to play the game.

How to Win Viking Reign Slots

In terms of payouts, there are few valuable symbols on the paytable. The wilds don't pay any, however, the scatter does, 100x, 10x and 2x for five, four and three matching symbols anywhere on the reels.

Next in terms of value on the Viking Reign slots paytable is the ship. Five of a kind pay 33.33x, four pay 3.33x and three pay 0.8x. As it is made apparent by the paytable, the payouts in the base game are low for all symbol outcomes except five or in some cases four of a kind.

The reason for the above is because this is a game where the free spins can rake in the biggest cash, thanks to the multipliers.

Three or more scatters trigger 10 free spins. During the feature, the dragon wild can appear only on the middle reel, while the diamond wild appears on all other reels except that one.

When the diamond wild helps to make a win on the second reel, the winning outcome gets a multiplier of 1x or 2x. When the wild makes a win from the fourth reel, the multiplier can be either 1x or 5x.

If more than one wild helps to make a win, the multipliers are cross-multiplied.

Ainsworth has made the game available as a free play demo slot. Players can try it with free credits at online casinos that host slots in practice play mode.

This is a game that is marked by low royal card values. The high-paying symbols can pay prizes that are a lot better, but to hit some good wins you’d need four or five of a kind. Thankfully, there is the bonus game where players can get multipliers of up to 5x for a single wild or more if there are more wilds to form a win.

Claim a welcome offer from this page and discover Viking Reign slots at top-rated online casinos.