When the Colossal Vikings fall on the reels, it's a battle for the bounty on a high variance slot that can deliver multipliers of up to x10 and a number of significant symbol pays. Booming Games have made a rell set of three rows and five reels that spin across 20 paylines. With a smallest wager of just 0.20 the players will find pitched against three colossal standard symbols and one colossal wild. 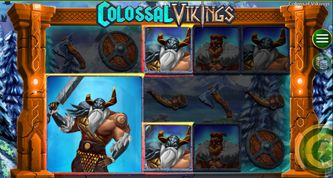 Unleash some Viking power on the Colossal Vikings slots, where huge symbols and multiplying wilds can deliver serious wins.

In the world of online slots there are colossal gems, colossal reels, colossal symbols, and now there is the Colossal Vikings slot. The slots makers at Booming Games are following up with another great release, but this time with way more edge than monkeys, bananas and cherries.

The Vikings and their implements frequent a reel-set of three rows and five reels that spin across 20 always active paylines. The game has an epic feel to it, not owing just to the colossal columns that spell out the magic-invoking runes for the players.

The winnings are made from left to right when three or more of the same symbols fall on one or more of the paylines. The name hints it that there are colossal symbols visiting the gameplay and these interact with the rest of the symbols towards eventual winning outcomes. Then there are multipliers of up to 10x which are wild and sub for any but the bonus, and other treats such as this one.

The slot design of the game has a mighty look and feel and this is thanks to the awesome art on the symbols. While the symbols aren't animated and barely spring to life when they become part of a winning outcome, the players will never feel bored playing Colossal Vikings slots.

Why? Because the slots experts at NBooming Games have made a perfect slot game, with serious winning potentials and a smooth gameplay. The musical theme shoots under the bar and it is the only thing that is kind of off, but then, you can always toggle the music and sound off from the plus button that is attached to the big round spin button.

How to Play Colossal Vikings Slot

The action on the reels starts when you press the spin button, which is big and green and can't be missed. But before you press it make sure that the default bet is a sum that you are comfortable playing.

You can change the bet amount very easily in the Colossal Vikings slot. When the game is not in a spin press the coin stacks icon in the upper right area and select from there a sum that works for you.

As you can imagine the potential wins, especially heightened by a multiplying wild can be huge, but the stake itself is exorbitant to spend on a non-winning spin.

If you have picked a bet that works for your style of play and budget you can also set the autoplay function. To do that press on the plus button which can be found on the left of the spin button.

This will open up a menu with few options. The thunder bolt symbol speeds up the spins and the play symbol with the number 50 in it launches 50 automatic spins. Since there are no option to set a single win or a total loss limit, it's always smart to mind your balance.

How to Win Colossal Vikings Slots

The most valuable symbols in the game are the red-headed viking, paying 10x multiplied by the triggering bet, when five of the same fall on a payline. This is followed by the Viking wearing a braided beard, whose symbol pays 7.5x on the winning bet and the third Viking is the one whose helmet has a broken horn. This symbol pays 5x on the bet.

The low paying symbols pay significantly less, between 1x and 2.5x on the bet, when five of the same fall on one of the paylines.

The Colossal Vikings slot comes with a wild symbol. It pays a little bit itself, however, it does deliver multipliers between x1 and x10 when one of these symbols form a winning combination.

The bonus features on this slot game are plenty compared to normal slots. We may consider the multiplier wilds a bonus feature because this isn’t part of most online slots out there. The colossal Viking symbols are also part of the base game and part of the free spins. These make it easier to connect a winning line because they can cover as much as three whole reels.

The free spins bonus is triggered by a medallion with the letter V inscribed in it. When three or more of this symbol falls on the reel set the game will launch the free spins bonus. The best outcome is with five of these symbols, which brings 12 free spins.

Booming Games have made this game available as a demo at a number of online casinos that provide demo slots to registered players. On the other hand, you don’t really need a demo with a smallest wager of only 0.20 per spin.

A mighty slot game by a company that has more than 100 titles under its belt, Colossal Vikings is here to both entertain, engage and pay. The game’s variance is High meaning the hit rate will be far out and in-between for bigger payouts, while the RTP hasn’t been disclosed yet.

Claim a welcome offer to play the Colossal Vikings slot at some of the best online casinos in the UK.