The purveyors of the Megaways payout system have been busy at work since they released their first-ever Megaclusters payout system for the Starclusters Megaclusters slot. The game at hand is called CyberSlot Megaclusters and all that we know about it is that it comes with a killer tune, which is a crossover between electro and a Daft Punk-like synthpop. But that is just for setting the mood for a timeless reel adventure because BTG always creates excellent slots. 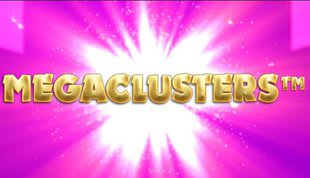 A blue and purple surface covered by a grid of squares is the core building block of anything that is set in the 1980's sci-fi leitmotif, marked by lazers, UV light and electronic synthesizer music. The game at hand still has a fresh feel to it because it is the second Big Time Gaming title that has the Megaclusters payout system.

But what shall the gameplay entail and how big is the payout potential? We’ll take up the latter matter first. BTG introduced their new payout system with Star Clusters Megacluster where the mathematical maximum for the game spells out a potential payout of 23960x that can result from a single bet.

The present game is called CyberSlot Megaclusters and comes with the same payout mechanism but also with few novelties, thus making it evident that BTG are evolving things further.

Slot enthusiasts who had overlooked the Starclusters slot have a chance to correct that error by trying this game out for a fit. There are many exciting details about Cyberslot and these don't start nor do they end with the win Reactions. These are basically winning outcomes that result in the consecutive branching out of new symbols.

Those with a mathematician's mind may be able to see beyond the colorful graphics and imagine the way in which any positive outcome creates a shrapnel of numbers that carry the potential to match another matching value that exists on the grid of a reel set.

Cyberslot Megaclusters makes landing multiple winning outcomes from the same spin possible and for one such outcome to occur there need to be five matching symbols in a cluster. The triggered reaction creates nine additional symbols that occupy a single position on the grid and any winning outcomes thereof will cause the small symbols to disintegrate and the empty spaces to become filled with new symbols. And so till infinity or until the winning outcomes cease to occur.

You can wager between 20p and £20.00 per spin on this game against a highly volatile model, which justifies the huge payout potential that is typical for Big Time Gaming releases - as a rule, of 10,000x your bet or higher.

The Cyberslot Megaclusters comes with a wild symbol that appears in the standard game and two different wild planets whose presence can be felt in the bonus feature.

A significant part of the gameplay are the win multipliers which can offset towards the positive the standardly low symbol payouts, which come by way of a total of seven symbols. Most valuable are the gaseous planets and landing a cluster of 25 symbols, or more, results in a payout of 25x your bet.

Surely enough, the game comes with a bonus feature that couldn't be anything else but a set of free rounds. These are triggered with no less than 12 subsequent wins, or reactions, in exchange for six free spins. Naturally, the reel set expands from the base game grid of 3x3 to 9x9.

Big Time Gaming has made expanding the number of free spins far more interesting than simply landing a scatter/bonus symbol. In Cyberslot Megaclusters, the roaming wild symbol from the base game is kept as part of the bonus, where it can accrue multiplie values. If the wild's value reaches a 10x multiplier, the game awards two extra spins.

One caveat is that reactions during the free spins will result in four smaller symbols instead of nine.

We can expect a lot of purple hues, a lot of lasers and a lot of UV lights spread around the reel set. Whether it is going to resemble Starclusters Megaclusters or it is going to assume another reel set format, time will tell. Nevertheless, players can likewise expect a smooth gameplay with radiant colors and visual effects that are produced by the winning outcomes. Bonus events are certainly going to put up a better show, but the most impressive detail from a game we know nothing about at the moment is the soundtrack.

There can be no two ways about it - those who play Cyberslot Megclusters will find it to be an exciting if not thrilling online slot. Those planets can become really tiny if the winning outcomes carry on in succession, which ought to attract wild wins and increased win multipliers thereby. And also, three wilds are definitely better than one, and the game has it all.

Big Time Gaming are going to release the CyberSlot Megaclusters slot to a crowd of cheering fans, as the megaways engine has a huge following among slots players two years since it was first launched. Claim a welcome bonus to find the game and play it.