Make some monsters melt down and score prizes in Endemol's Monster Meltdown slot. The top payout of 15x matching symbol is rather huge and therefore rare, but there are smaller payouts that are possible with the monster replacer feature. The game's variance is medium and the theoretical RTP is on average at 96.01% 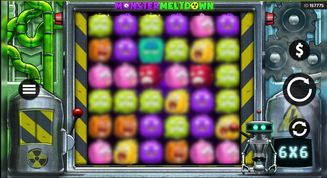 Take control of the bizarre contraption and play for a chance to produce high-paying creatures on the Monster Meltdown slot.

The famed television show producers Endemol take us to an online slots adventure to outer space where a time hole can channel-in slimy, goofy monsters in return for cash prizes. Thankfully, the robot in charge can expand his contraption (the reel-set) to cover six reels and six rows.

Monster Meltdown slot delivers matching symbol clusters and more than one of these can result from a single spin. Enzido, the slots experts who created the game, have left the possibility for cluster wins of 15 symbols of less, which on the standard 3x5 reel set means a full grid of the same symbol kind.

A maximum theoretical payout of 250,000 can be scored in the most optimal succession of outcomes with the maximum spin. While that amount seems unlikely, prizes up to that can be won and still count for serious wins.

Good entertainment awaits on this production stamped 'ours' by Endemol. To pass, it had to include moving parts, of which there is quite enough. The robot below the reel set moves about and twangs his antenna and shrugs when the reel-set sits idle. When a win occurs, then, it certainly shows joy, as a Monster Meltdown has occurred.

The reel-set itself is locked inside a heavy gear frame that can expand. The symbols are a bunch of 'monsters' that are rather cute life forms from another planet. The Monster Meltdown slot doesn't have a musical theme but there are lots of sci-fi sounds emanating from the vortexes and from the robot, adding a but of humor to the game.

How to Play Monster Meltdown Slot

Open up some black holes by pressing the spin button or settle for space travel through a wormhole by programming the automatic spins. Either option is good to play the Monster Meltdown slots.

To configure the bet simply select one of the available wagers from the list. They are available with the click (or tap) of the dollar sign button that can be found in the top right corner.

The smallest bet is only £0.10 per spin and the biggest bet is a whole lot at £500.00. There is a wide range of small, medium and big bets in between, so that you can take on the game from whatever angle you want.

The menu can be accessed from the left hand side button represented by three lines in a circle. It opens up additional buttons for the Turbo (spins), sound on or off, game information and paytable.

How to Win Monster Meltdown Slots

The game doesn't have a fixed number of paylines even though it starts as a 3x5 game. This is because the symbols form clusters. The minimum number of monsters you need for a cluster win is five and the maximum number is 15.

Because all of the symbols in Monster Meltdown slots are, naturally, monsters, we can't divide them by category (such as cards and picture symbols) but we can distinguish them by expression.

So, the most rewarding is the brainy monster who has a pleasant expression on its face. It pays 500x on the winning bet when fifteen of the same fall on the grid.

The impish monster head pays 400x for the most optimal outcome and pumpkin-head pays also 400x. The other four - green and yellow, purple and pink monsters pay 300x and 150x respectively.

The game offers few extras, if we can count as one the expanding grid. Unfortunately, there is no free spins bonus and much to our surprise, no successive wins which the initial setup suggests.

At any rate, there is the the monster replacement feature which has the machine to the left produce a monster of a certain type and reproduce it in multiple locations on the reel-set.

The expanding reel-set is completely a random event, so it doesn't depend on triggers that occur on the reels. A kicker are the two respins which are also a random event that can only occur on a 6x6 grid.

The game is available as a demo. This lets curious punters investigate whether it is worth playing. Those who aren’t into searching for free play demo slots can discover the game with the smallest wager of 0.10 per spin.

Anyone willing to bet £500.00 per spin for the possibility of seeing fifteen brainy monsters may get to see the top payout of £50,000. In other words, there is a long range of prizes that can be won even with smaller bets.