Enter the secret tent and discover all the magical gems on the Medallion Megaways slot. The game of six reels has a megaways engine licensed by Big Time Gaming, with up to 50,000 ways to win and a top potential prize of more than 23,000x. Medallion Megaways has a respin and a free spin feature, as well as expanding wilds that can bring multipliers between x2 and x6. 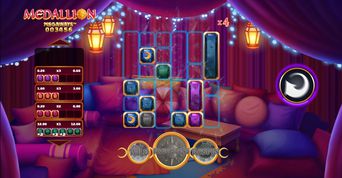 Discover the gems and see if they align for avalanche wins in the Medallion Megaways slot, where you can win up to 23,000x.

Fantasma Games made their latest Megaways slot in the guise of a sultan's quarter, with gem blocks falling and expanding on 46656 ways to win. Medallion Megaways slots was released exclusively on LeoVegas but now the game is available to many other online casinos.

The players will discover a reel set that consists of six rows and six reels that offer a set of mysterious symbols that seem as if borrowed from the Picatrix book of magic and alchemy. That may certainly have been the case, because Medallion Megaways offers a maximum win prize of more than 23,000x multiplied by the bet.

The slots experts at Fantasma Games had included engaging gameplay that involves collecting the special symbols in a scale, which can generate a prize and throw additional multipliers on the total outcome. Symbol wins are made with three or more of the same, occurring on consecutive reels.

We are located inside a tent with low-lying cushions and bobbing lanterns in the Levantine style. The choice of symbols fits the surroundings. All the gems on the reel set can fall in the consecutive wins manner, where each win is marked by a modest light animation.

Big wins in the Medallion Megaways slot are marked by a befitting event of money sprouting out from the bottom of the screen. The game comes with a musical theme that fills the surroundings with some simple Arabesque tones.

How to Play Medallion Megaways Slot

To begin your adventure you need to choose your bet per spin. This is easily done from the coin stack button that has a plus sign on it. Click or tap there to open up the grid that contains all of the bets, ranging between £0.10 for the lowest to £80.00 for the highest bet.

Once you have selected your bet you can press the spin button to set the reel action going. The Medallion Megaways slots will spin the reels once with the selected wager. If you want to really relax in this tend while the slot game does the bidding for you, you can choose the autospins option.

When you choose the autoplay from the top right corner of the screen you will see a screen open up that offers additional options. You can choose from the autospins presets and also add the optional stops, such as a stop on a single win limit or stop on a total loss amount.

How to Win Medallion Megaways Slots

The game delivers winning outcomes through the megaways and there can be as many as 46656 combinations. A single win can trigger an avalanche of consecutive wins, which are registered on the left of the reels, along with the added multiplier and the size of each avalanche win.

Medallion Megaways slot has three symbol categories that are divided according to value. The high symbols consist of the black, red, blue and green gems. Each carries a symbol, snake, star, moon and triangle, and the pays are 30x, 15x, 8x and 6x respectively when six matching symbols stop on the reel-set.

The game's top cash prize is more than 23,000x multiplied by the winning bet and there are many possibilities for a big prize leading up to this.

The game has a free spins bonus and a respin. Each of these features are triggered when one of the stones carrying that action is activated. 10 spins are given with the triggering of the Medallion Megaways free spins bonus.

Then there is the name-giving feature of this slot, the golden and silver medallions. These can be activated at random at the end of any spin that is not part of a bonus feature. The medallion has two sides, gold and silver.

The gold side will trigger one or more of the bonus feature stones. The silver side of the coin will deactivate the corresponding feature.

The game has feature stones that carry a wild, free spins and respin. The wild symbol is especially valuable because it comes extended on the reels and can fall as such on the four middle reels at the same time. This feature is triggered by the wild stone and can bring multipliers between x2 and x6.

Even though this game was offered exclusively on LeoVegas it is now available at other online casinos. The players can find it as demo at LeoVegas as this is one of the casinos that offers demo versions for the players to try before playing.

Even though the number of megaways doesn’t go past 50,000 this is still a megaways game that works on the licensed Big Time Gaming mechanism. Unlike most other megaways titles Medallion Megaways slots pays a lot more than the usual cap of 10,000x on the winning bet.

Claim a welcome offer to play Medallion Megaways slot at some of the online casinos on this page.