Let Sabaton rock your world with some of their heaviest of metal tunes and on three rows and five reels. This is a ten payline slot that has them all active at all times, spinning for a chance to land the chained mega symbols covering nine grids on the reel-set. With a top payout of 500,000x and more than one bonus feature, Sabaton slot is a true online casino tribute to this Swedish band. 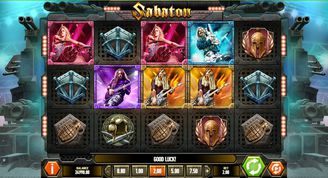 Play the Sabaton slot, the only licensed slot tribute to the Swedish metal band. Get rockin’ with amazing bonus features and a possible 500,000x.

Stand in front of a cannonade of heavy metal sounds and launch the reels on the Sabaton slot. This high-octane reel adventure was created by the slots experts at Play N Go, who have a knack for bringing the best out of branded content. Sabaton is one such game.

It represents the Swedish metal band Sabaton in all its international fame and glory. The players will get a kick out of the bonus features, the high-powered symbols and some of the band's most memorable tracks.

Everything you could imagine on a slot game takes place on three rows, five reels and 10 always active paylines. The range of bets is wide for anyone to engage in this metal-clad adventure and the maximum potential win is to the tune of 500,000x multiplied by the line bet.

How to Play Sabaton Slot

To start the game first select a wager from those that are available on the slider, just below the reel-set. In an amazing arrangement of possibilities, the smallest bet is only £0.10 and the top bet is £100.00 per spin.

Conversely, there are so many amounts for the wager in-between these that the players can pick the sum that fits the balance and play on. Once the bet has been selected, press the green Spin button or opt for the autospin, which is the orange hexagon to the right of the latter.

There is another button that may come in useful and that is the paytable. Located in the bottom left corner of the screen, this orange button opens up a view into the symbol pays and explains some gameplay details, as well as how the bonus features start and what they do.

How to Win Sabaton Slot

The game has enough picture symbols and potential winnings attached to these to bring on a mighty thrilling game on the reels. The most valuable symbol is the Wild which pays £200.00 on a bet of £2.00. Of the high-paying symbols the most valuable is the blue-framed guitarist, whose five symbols on a payline brings £20.00 on the same bet we stated above. The next three symbols are the other three band members and they are £15.00 heavy for the same symbol combination.

The wild symbol is the band’s foreman, but whatever that man in a fighting pose represents, it is the symbol that substitutes for any other in a winning combination, except for the scatter symbol, which is the game's bonus.

The Chained Reels feature is activated randomly. It will chain together in a colossal square a symbol that will then expand to cover the entirety of two or tree reels. This bonus feature does not appear during the Battalion Spins bonus.

Another random feature is Last Stand. What it does is chooses random one or two reels which become stacked wild. That way, the reels interact with almost all symbols on the reels which bear a potential winning combination. This feature can trigger both in the base game and during the Sabaton bonus feature Battalion Spins.

Yet another bonus is Metal Stacks, which comes with a Mystery Symbol. This is a random symbol selected from what the reels turn up with each spin. This symbol will replace the scatter if it appears on the reels anywhere between three and eight times. During the Battalion Spins there will be one symbol that is selected to act as the Metal Stacks and Mystery Symbol at the same time, for the bonus duration.

The free spins bonus feature is activated with the scatter. A mega scatter covering three rows and three reels can drop and provide an entire nine scatters. In another instance, nine other scatters can also trigger this bonus, even partially visible mega scatter in combination with those that have stopped on the reels.

At the get go, the players will get seven free spins and there is one big perk. The center reels will be linked together to provide a mega symbol. If a re-triggering even occurs, it will be brought on by nine or more scatters landing on the reels yet again.

The game has quite a decent return to player theoretical outcome of above average of 96.50%. For a branded game that translates to kudos from the fans. WIth 96.50% on 100 pounds, over an extended play, the players would expect to get back 96.50 pounds from their bets, unless there is a big win and the winnings become multiplied once, twice or manifold.

There can be no other way than having Sabaton slot fitted for mobile. Android and iPhone users who have access to a mobile casino (pretty much any of the good ones today - hint - those on this page) can also load the game and get into some headbanger bonus features.

Start your Sabaton experience by claiming a welcome offer at one of the casinos right on this page.

On the other hand, those who love playing the slots but Sabaton is too heavy or less relatable, there is always the Guns N Roses slot that can be enjoyed with its full theatrical aesthetics and sound.