The players can discover three rows, five reels and 20 paylines. Wins are made with three or more symbols and bets start as low as 20p per spin. The theoretical return to player on Forbidden Princess HD is 96.00% and the variance is high. The maximum payout potential is 1000x and possibly more. 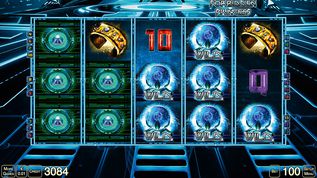 We can't help it but marvel at this release by Merkur that puts a Conan-esque figure in the main  role. The reel adventure takes place in a futuristic setting - a world that is made of steel and energy fields. The setting is perfect, as is the design, for a name like Forbidden Princess HD slot. The slots experts at Merkur have opted for a standard layout and few instead of many features, which for this game works perfectly well.

The reel adventure involves a futuristic setting and a terrific base game. Players can get the help of a wild symbol and score a free spins bonus and respins. Overall, the game looks not unlike few other games by the same company, who like to put heroic women at the center of the drama, such as Dragon's Maid slot and Ankaa's Dawn.

In terms of graphic design, Merkur Gaming Group is telling a story about a heroine that carries a battle axe and some sort of a plasma pistol. A magical gold bracelet graces her wrist and there is an orb that can help create telepathic communication. The symbols can spin up quite the story for the players, for a game that can be as exiciting as the potential payouts.

Forbidden Princess HD slots has some animated bits, such as with the princess' symbol, which comes to life when it is part of a winning combination. The scatter is another symbol that springs into life, as it is the depiction of the futuristic city where our princess resides. Overall, visually, it is a quality game, but the musical score could have been something rather than basic sounds.

Setting up for the gameplay requires choosing a bet from the available range and pressing the spin button. The settings can be found at the bottom of the reels.

To choose your bet. press the second square button in the bottom left corner of the screen. The smallest bet is 20p per spin, which is made with one penny per payline. The higher sums can provide the player with a high-stakes slots adventure.

One way to play Forbidden Princess HD slot is by selecting the autoplay menu. This enables players to choose the number of automatic spins for each spin and add some conditional controls, which help mind the spending of the balance, or to prompt you when you've won an amount that passes a specified threshold.

The Setup Menu in the bottom right corner of the screen offers the settings for the sound and the spins. Players can view the paytable from the menu to check out the symbol payouts, however, there is no need to really do this as each payout is automatically registered and annotated at the bottom of the screen.

How to Win Forbidden Princess Slots

Winning at the game can take place on one or more of the 20 fixed paylines. Unlike in few games by the same company, here we don’t have payouts for two matching symbols. That is alright, let’s suppose because those payouts are below the bet amount anyway, although, they do bring a refreshing event on the reel set.

In terms of symbol values, there are few interesting amounts. Let's start with the symbol that gives the Forbidden Princess slot its name. That symbol pays 1000x multiplied by the payline bet for five matching symbols. Four of a kind pay 100x and five pay 40x.

The red book pays 300x for the payline bet, the set of bracelet, gun, compass and axe symbols pay the same amounts for the three payout levels: 10x, 40x an 150x. Lastly, the royal cards pay amounts that are lower than that.

The game has a bonus symbol that triggers ten free spins in exchange for three scattered symbols. Another bonus feature is triggered with three rocket symbols on reel one.

the wild symbol is the blue orb and substitutes for all symbols, except the scatter. The game can trigger multiple wilds and stacked wilds, which helps to increase the odds at winning bigger prizes.

The game is available as a free play demo slot at online casinos that host their games in practice play mode, as well as in real money play mode. This enables players to check out the features and decide whether to play Forbidden Princess with real money.

Visually, the game is quite stunning for those who enjoy the sci-fi genre of books, movies, games and even slots. Other than that, the gameplay is quite alright, especially the fact that wild symbols can come one stacked on any spin.