Legacy Of The Tiger Slot

Legacy of the Tiger comes with a 3x5 layout that spins across 50 always-active paylines. Winning outcomes can form with at least three matching symbols and players can play starting with 10p per spin. The theoretical return to player as of yet is still unknown, but considering previous releases in the similar style, Playtech Origins usually grant them figures around the 96.00% mark. 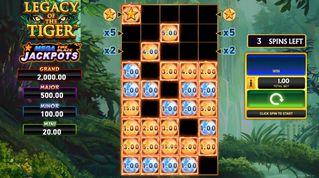 Legacy Of The Tiger Slot Online

Playtech Origins have decided to take one of their slots with an epic theme and give it the Fire Blaze Mega Jackpots treatment. The game at hand is Legacy of the Tiger slot, which takes us to the deep jungles that are inhabited with animals and a fierce she-warrior.

Legacy of the Tiger Introduction

Legacy of the Tiger has a decent base game, even though it is the bonus feature that brings about the biggest thrill. Payouts in the base game don't necessarily come with any notable exceptions, but this is only because of the four jackpots, as the focus of the game is mostly on those.

The Grand jackpot pays the biggest prize in the game of 2000x multiplied by the bet that triggered the Fire Blaze jackpot feature.

Legacy of the Tiger Design Features

In terms of graphic design, the game does everything by the Playtech Origins book. The symbols have been drawn and rendered in a perfect manner and the reels offer a dynamism that bring about a pro gaming experience.

High-pay symbols in Legacy of the Tiger slots are a set of animals that include tiger, albino python, a simian and a toucan. Each of these springs to life when it becomes part of a winning outcome, but it is the tiger that comes around with the biggest response.

Legacy of the Tiger has a nice musical tune that carries over some of the undertones that can be heard on the Kingdoms Rise slots series. Nevertheless, it is a decent piece of music, much in tune with the gameplay.

How to Play Legacy of the Tiger Slot

Setting up for the gameplay requires first and foremost to choose an amount for your bet. This can be easily done by pressing the minus and plus symbols at the bottom of the reels. The smallest bet in this game is 10p and players can choose to roll with more than £100.00 per spin if the occasion ever arises, hopefully following a big jackpot win.

Legacy of the Tiger slot has the spin button in the bottom right corner, which is the usual place for most games by Playtech. To the right of that emerald-green button is the one for fast spins, and yet another look to the left is the button for autoplay.

Selecting autoplay from below the reel-set lets the players choose the number of automatic spins, however, anyone who wants to place some additional controls during this mode can do that through the main menu. There, players can place limits on the balance spend and prompt autoplay to stop when the bonus feature has triggered.

How to Win Legacy of the Tiger Slots

Wins are made with three matching symbols, with four delivering better outcomes, and five optimal. With the five always-active paylines, the game can trigger multiple winning outcomes across the reel-set, resulting from the same bet.

Legacy of the Tiger slot has the tiger as its wild. it substitutes for all symbols and can also come expanded across the reels. This is also the most lucrative symbol in the game.

Another symbol that is very important for the base game is the sun symbol Six of these trigger the Fire Blaze feature.

Legacy of the Tiger Bonus Features

The blaze feature is the jackpot game that players can enjoy across nine rows and five reels. This is the classical and previously seen Hold and Win feature, with the exception of there being nine rows instead of whatever number is on the reel-set in the base game.

The bonus starts with three respins. These reset whenever a sun or moon symbol lands on the grid. Any of these symbols can come with the Mini, Minor or Major marking on them to trigger the corresponding jackpot.

The Grand Fire Blaze jackpot prize is 2000x multiplied by the winning bet and triggers when the full reel-set has been filled with the bonus symbols.

The cash prizes that can amass on aggregate gain multipliers of 2x and 5x when they reach the seventh and ninth rows.

Legacy of the Tiger RTP

It seems that it is company policy of Playtech Origins to withold the figure of the theoretical return to player. This is a jackpot game and it is very likely that the RTP can waver in a range of figures, between the base game and the bonus game, which is where any one of the jackpot prizes can crop up. Nevertheless, if it helps any players make a decision to play Legacy of the Tiger, it is very unlikely that the RTP is below 93.00%, as this figure is typical for progressive, networked jackpot slots. Because this game isn't that, we can hope that players can get at least that figure, but more likely above that for the RTP.

Legacy of the Tiger Free Play

Players who are interested in trying out the game can play it as a free demo slot at online casinos that have slots in practice play mode. Everything on the demo game is as in the real-money play, except the winnings that don’t pay real cash.

Legacy of the Tiger Closing Thoughts

Players can enjoy this and many other games similar to this, but we’ve yet to see an expanded reel-set for the Hold and Win, which is the same as the Fire Blaze jackpot bonus. Nevertheless, Legacy of the Tiger is fun to play, but the base game winnings are admittedly low and need the help of the wild to account for something worth counting.

Discover the Legacy of the Tiger slots by claiming a welcome offer right from this page and play at top-rated online casinos.

Tarzan and the Jewels of Opar

Can you play Legacy of the Tiger slot at online casinos?

The game was made by Playtech as an exclusive land-based casino slot, however, players can play Legacy of the Tiger online too.

Is Legacy of the Tiger a jackpot slot?

Players can play the game for a chance to score four instant jackpot prizes. The jackpots can be won during the jackpot bonus feature, which is in the style of Hold and Win bonus games with respins and sticky bonus symbols.

What is the maximum payout potential and Legacy of the Tiger slot?

The Grand Jackpot prize pays 2000x multiplied by the bet.