The game comes with five vertical and a maximum of seven horizontal rows. At first players tend to be confused as to how Serpent Shrine makes its payouts, but that becomes clear soon enough. You need at least three matching symbols on adjacent reels, left to right. The smallest bet is 20p, the theoretical return to player (RTP) is 96.53% and the variance is high. 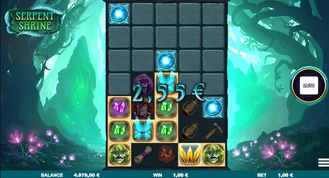 Fantasma Games are releasing through Relax Gaming a slot game that has an oblong reel set and a mysterious vibe to it. Players will find out soon enough that the game mushes together biker skeletons and gold and diamond digging equipment on a playing field whose rows can expand towards a maximum payout potential of more than 5000x multiplied by your bet.

Serpent Shrine slot comes with more than one extra feature. First off, players can get the benefit of a wild symbol, blocker-busting bombs, something called a Butterfly Feature, Bomb Feature and five different modes of the Snake Free Spin bonus. Overall, the game is dynamic and fun to play, which leaves a lot of room for the said maximum winning outcome.

The graphic design doesn't boast of anything that is exceptional but this is only because the style of the game demands symbols with limited details and no animation. The style in which the symbols have been drawn and rendered makes them appear kind of stale, but that doesn't mean that the reel adventure itself is stale.

Serpent Shrine slots can get quite energetic, especially as the blockers start breaking with the help of the winning outcomes. When the full reel set is unleashed the players can witness the power of this high variance slot. One of the highlights and perhaps the only one regarding the design is that Serpent Shrine has quite a decent musical theme. The rest is just spinning of the reels.

How to Play Serpent Shrine Slot

To start spinning the reels on this blocky reel adventure players need to get familiar with the Fantasma Games settings layout. The game has all of the important buttons on the right side of the reels and all of the display windows are at the bottom.

To select the wager press the button in the bottom right that looks like a stack of coins with the plus symbol on it. This opens up a grid with bet amounts that range between 20p for the minimum bet and £100.00 for the maximum. Regardless of the betting amount that is selected the Serpent Shrine slot will play across all possible paylines.

Some players engage the game in its autoplay mode. This can be done by pressing the button at the top of the right side. This opens up a box with settings where players can choose the number of automatic spins from the presets and add optional controls, such as a win limit, loss limit and single win limit. Once ready, press the checkmark and the autoplay mode will start to roll out.

Another button can be seen in the bottom right corner of the screen. It is a three horizontal lines button which opens up the paytable. This is where players can view the symbol payouts for each particular level of win.

How to Win Serpent Shrine Slots

There are two symbol categories in this game. The set of high-paying symbols consists of three skeletons and a serpent. These are the symbols of value, as each one pays back the bet at 1x or more, at 2.5x. The most valuable symbol in Serpent Shrine slot is the serpent, three, four and five matching symbol pay 2.5x, 5x and 10x multiplied by the bet.

There are three gem symbols that pay between 0.5x and 1.5 for three, four and five of a kind and the low paying symbols are the mining equipment symbols, which pay between 0.25x and 0.75x.

Serpent Shrine has a wild symbol and the so-called bomb symbol, which doesn't pay any and can be destroyed from the screen.

If the Butterfly Feature unlocks a bomb on any of the tiles, that symbol explodes and unlocks tiles that are adjacent to it around all sides. The game may award a respin during which a Butterfly Wild is placed on random locations on the reel set.

The free spins bonus is triggered when all tiles have been removed from the reel set. Players get five spins and each one is followed by a 1x multiplier added to multiply the previous multiplier. This way, the fifth Snake Free Spin comes with a 100x multiplier. The snake becomes alive during these spins and makes an impact on the reel set in order to try and activate the Super Free Spins.

Players can try the game as a free play demo slot which enables anyone to experience the bonus features and the gameplay with free credits. This is possible at online casinos that host slots in practice play mode.

Both the gameplay and the extra features are interesting but the graphics are not too enticing. Anyone who is interested in making out the point of the premise may get to enjoy the whole package, which nevertheless comes with a decent maximum payout potential.

Claim a welcome offer from this page and discover Serpent Shrine slot at top-rated online casinos.