The Williams studio did well to produce the Amazon Queen slot. It plays on five reels, three rows and 20 paylines which can be selected. The game has the Amazon Queen symbol as the game's feature, meaning, it will scatter the winnings for a full pay and it will trigger the free spims bonus feature. Landing a cluster of gorilla symbols, five in total, leads to a prize of 2500 and five tigers turns up 1800x coins on the line bet. The maximum prize has been capped at 135,000x on the line bet and the players can bet as little as pennies for the spin. 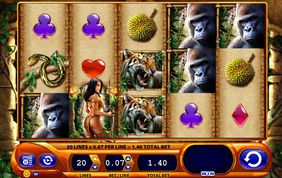 The focus of the Amazon Queen slots machine from the software developer WMS Gaming is the mythological tribe of women warriors, the Amazons. This five-reel and twenty payline online slot offers more than just the beautiful representations of the Amazonian warriors displayed in the jungles of Amazon. With a couple of bonus features and an RTP of solid 95.00%, Amazon Queen slots offers standard enjoyable gameplay with lots of free spins to win.

As mentioned in the overview above, this online slot by WMS Gaming is based on the theme of the mythological warrior women, the Amazons, who actually originated from the what is now the Middle East. The entire video slot, from the background to the game symbols, is designed to follow the theme of the game, either by representing on-theme items or items given a certain ‘Amazonian’ twist. The reel set of Amazonian Queen slots makes use of five reels in three rows and a total of twenty paylines.

The group of high-value symbols consists of four game-specific symbols including a durian fruit, python coiled around a branch, a macaw parrot, and a growling tiger, also given in ascending order. The high-value symbols also award certain payouts for landed combinations of three, four, and five matching symbols.

Operating Amazon Queen slots is very straightforward since all variables and buttons are placed at the bottom of the screen and well-marked. Before spinning the reels, players need to decide on their total bet. By pressing the ‘up’ and ‘down’ arrows from the LINES box, you can choose the number of active paylines that you want to place your bet on. As mentioned previously, you can select anywhere from one to two paylines.

The second variable is the bet per line which ranges between £0.01-£3.00. When you combine these two variables you get your total bet for the spin, which is displayed in the TOTAL BET box. To get the reels spinning, you need to press the blue button with an inverted arrow in the bottom left corner of the screen, i.e. the Spin button.

If you want to enjoy the gameplay of Amazon Queen slots without pressing Spin after each spin of the reel set, then the Autoplay option is here for you. By pressing the blue button with ‘play’ symbol and inverted arrows on it, you can spin the reel set for a certain number of rounds for the selected total bet. So, before selecting this option, always make sure to set the two variables that comprise the Total Bet.

How to Win Amazon Queen

Winning payouts in Amazon Queen slots are dependent on which symbols are landed on the reels and their number. As stated previously in the text, both low-value and high-value symbols award certain payouts for landing combinations of three, four, and five matching symbols.

The free spins feature of Amazon Queen slots is the main bonus game which is triggered by landing three, four, or five of the Amazon Queen Scatters anywhere on the reels during the base game. Depending on the number of Scatters, you will be awarded 10, 25, or astonishing 100 free spins. If you manage to land three or more scatter symbols during this round, you will win even more free spins!

The gorilla symbol in Amazon Queen slots can also appear as a stacked symbol, so if you get gorilla symbols on all positions of any reel, the game will present you with a nice animation of this impressive jungle animal.

The five-reel 20 payline Amazon Queen slots by the software developer WMS Gaming is a standard but enjoyable online video slot. The one bonus feature that you need to look out for is the Free Spins feature where you can win incredible 100 free spins but winning them is not that easy. The game’s advertised RTP is solid 95.00%.

Around The Reels In 80 Wilds