Meet Spartacus for another historical battle against Roman rules in the Spartacus Super Colossal Reels slot. WMS produces this title in collaboration with SG Gaming where you’ll play on two contracting and dynamic reel sets that offer up to 100 ways to win. Ready to join Spartacus and his troop to conquer the reels? Find out more about the features and payout potential as we guide you through this review. 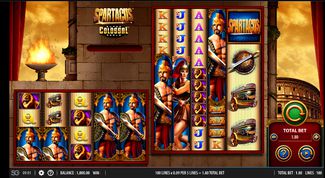 The story about Spartacus and his heroic moves and actions have been a continuous inspiration for WMS, one of SG Digital’s Partners. They’ve previously released Spartacus Megaways and Spartacus: Gladiator of Rome, historical, warrior-themed titles that performed exceptionally well among audiences and critics. In the Spartacus Super Colossal Reels slot, you’ll meet the famous slave rebellion and most prominent historical figure from that time. You’ll follow and lead his battle across 2 reel sets, one being a standard 5x4 grid and the other 12 rows high. Stay with us as we’ll explain the mechanics behind the reels and how you’ll benefit from the bonus features.

WMS and SG Digital take us on the Roman battlefield to meet Spartacus and his troop in the Spartacus Super Colossal Reels slot. You’ll have a chance to take over the action on the 100 active paylines and two contracting reel sets. You’ll see that these sets spin independently and form different combinations to maximise your chances to win. The action revolves around wild multipliers that boost your total up to 25x your bet, transferrable stacked wilds, respins and up to staggering 220 free spins accompanied by 100x wilds. Sounds glorious and victorious, right?

Before you take your strategy on the reel set, you must define your betting range that starts from £0.10 and goes up to £100 per spin. You can use the + and – buttons below the spin button to adjust your preferences, or set win and loss stop limits. To create a winning combination, you need to match 3 or more symbols on and active payline. As you may assume, you can do this on both the main and super colossal reels, as wilds can transfer and expand between these sets. The greatest potential to trigger a win comes from the multipliers and free spins, getting you closer to the maximum win of £250,000 per single spin.

The Spartacus Super Colossal Reels slot is based on Spartacus, the famous Roman warrior who was previously a slave uprising against the Roman Republic. As soon as you start the game, you’ll see and feel the dominant Roman elements regarding the design and colours. The background sounds are not overly intrusive, as you’ll only hear swords clanking and slow-tempo orchestral music.

On the reels, you’ll meet A-J royals, a sword, a shield, a chariot, a lion and a masked gladiator. These are all protected by the male and female gladiators/warriors that spin in an expanded size. Spartacus and the golden version of Spartacus are wild symbols that substitute any symbol from the collection, except the Colosseum scatter. You’ll also notice multiplier wilds that vary from 2x and up to 25x. These ones land on reel 5 on the Colossal reel and also take part in a winning combination.

The Return to Player ( RTP) ratio of the Spartacus Super Colossal Reels slot is impressive 96,76%, which is beyond the average compared to other new releases. On the other hand, the variance is high. This means that wins will be less frequent during the gameplay; however, they’d be quite hefty when they occur. Players that are comfortable with playing on highly volatile slots will find this game quite refreshing. For a slot game with 100 active paylines and 2 contracting reel sets, the potential win of £250,000 is not bad at all. We’ve written about different Variance, RTP and Volatility models in online slots. Feel free to read this guide before you decide to play.

The Spartacus Super Colossal Reels slot has few exciting bonus features on offer, and all of them deliver an exciting and active reel action. There are plenty of wilds, multipliers and free spins which we’ll explain below in more detail.

If you’re lucky to land a full stack of Spartacus or Golden Spartacus symbol on the main reel set, they will duplicate on the matching reel of the colossal screen. If a Colosseum scatter is involved in the combination, it acts as both a scatter and a wild.

As soon as you manage to transfer a Golden Wild symbol, you activate the Golden Wild Respin feature. Then, the symbol of Spartacus becomes sticky for a chance to respin the round. If more Gold Wilds land on the reels, expect more of that transfers and respins actions, where you can win up to 9 respins.

As we’ve mentioned previously, Spartacus and Golden Spartacus land as stacked and occupy two positions in height on the first four reels. These symbols take the traits of a standard wild when you expect transfers and respins.

This feature is triggered as soon as you land three or more Colosseum scatters across the 2 reel sets. The more scatters you land, the more free spins you’ll get. Here’s what you’ll trigger with every additional scatter:

In this round will join the 50x and 100x wilds along with the standard paying ones from the collection. When you land a wild during this round, it will expand in size and cover the whole reel. The wild transfer is also possible here, giving you a chance to boost your total win amount. Moreover, you can retrigger this feature up 10 ten times, which provides you with an opportunity to spin those reels for 220 times at most.

The Spartacus Super Colossal Reels slot by WMS is optimised to work on all mobile devices. The graphics and in-game features load and work great when playing on mobile. Because of the HTML5 sequence, it can adjust to any screen on every operating system.

WMS is an established slot game developer that collaborates with different providers and networks to deliver captivating gameplay. Check out their take on the all-favourite board game called Monopoly Electric Wins. This neon-themed title kept the original and authentic rules of play for a chance to win you more than 16,000x your bet. If you are an experienced slot player, you’ve probably come across the Raging Rhino slot, one of the most successful titles in their collection. They’ve also released sequels of it, featuring different engines and mechanics. Make sure to check Raging Rhino Megaways and Raging Rhino Rampage that are massive on the popularity scale.

Maybe at first, you’d find yourself to be a bit confused by the two contracting reel sets, having no idea what would happen during spins. However, once you start to spin the reels, you’ll see that every symbol and feature blends with the overall concept behind this mechanic. We love the warrior and passionate feel of the design. All in all, WMS provided a high-quality gaming experience, with plenty of bonuses and extras. This game stands high on the volatility scale, so make sure to set your bets correctly and gamble responsibly.

Discover Spartacus Super Colossal Reels slot today and claim your bonus offer at one of our featured casinos.