Discover the art of running your hotel, that is, Monopoly hotel, when playing this four-jackpot slot game. The slots experts at Williams have come up with five reels and 50 always active paylines for the Monopoly Grand Hotel slot. But, there are also bonus features in the shape of free spins, amazing multipliers on the feature of up to 20x and a jackpot prize of 1000x multiplied by the winning bet. 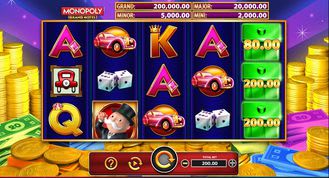 Spin the reels for a chance to become a Monopoly Grand Hotel slot tycoon with four jackpots and two top symbol prizes of 1000x.

Williams and Scientific Games are back with another Monopoly slot, fresh off the grill. No, this isn't a restaurant-themed Monopoly slot, but close enough. It is about running a hot hotel and that's where the money seems to be somewhere along the 50 always-active lines and five reels. The players will be glad to hear that it comes with a free spins bonus and quite a number of details surrounding the game's features. So let's get into it and see who the next hotel tycoon may be.

Play the game with bets that are as small as £0.25 per spin and three more increments of the same amount before reaching the £1.00 mark. From there on, the players will find low, medium-low and high bets, for whoever wants to engage in some high-stakes action. The Monopoly Grand Hotel slot has a maximum bet of £200.00 per spin. Press the centrally-pressed Spin button to set the reels going towards the potential winnings.

For those players who want to kick back and see the ticker moving up and down, the game offers the autoplay button. This is to the left of the play button. Pressing it will open up a table from where the players can choose from up to 200 automatic spins, and there is the additional option of setting a loss or a win limit. Press Start from that box to cause some reel action unfolding on its own and taking out the selected bet for each turn.

Whatever bet is selected, the game will always spin across all 50 paylines, whose arrangement can be viewed from the paytable. No matter that, each winning combination will be registered by the game.

The paytable is the only place where the players can view all of the symbol wins. These include for each combination of matching symbols - three, four and five. The sums are expressed in cash that is won on the win, according to the bet. The paytable is dynamic, which means changing the bet will also reflect on it, where the symbol pays get an update for the sum they return in the case of a win.

To access the paytable select the question mark symbol inscribed in a circle. Once there, use the arrows to browse through the several pages. The game's most valuable symbol is the red car, paying £1000 when won on the maximum bet of £200. The same amount can be brought with the white terrier symbol, when it lands on five consecutive reels on the biggest bet. These two are followed by two other picture symbols, the pink car paying 800x and the airplane, paying  600x.

The game has some other symbols, such as the wild and the scatter, both of which have a significant say in the game. That is, whenever the wild lands on a reel and is on an adjacent reel that has two or more matching symbols, then a win is paid with the wild.

The scatter symbol is represented by the renowned GO field, which in the slot game appears on the second, third and fourth reel. In addition to this, there is red and a green token which represents a hotel and a house respectively. These are also scatter symbols.

The free spins bonus is features when three or more GO symbols land on their respective reels. This brings on the wheel of fortune which is spun to reveal either free spins, cash prize or one of the four jackpots: GRAND, MAJOR, MINOR and MINI.

If free spins are granted, the players get six with a free parking bonus, which adds a multiplier to the rounds, at random, anywhere between 5x and 20x the bet. The cash prizes range between a double and 20x. The Monopoly Grand Hotel free spins bonus can be retriggered with the landing of another three scatters.

The GO feature can potentially lead to one of the jackpots which represent a set of fixed multipliers on the total bet. The MINI jackpot is 10x, MINOR is 25x, MAJOR is 100x and the big buck is with the GRAND, which pays 1000x on the winning bet.

As for the hotel and house tokens, these come with a cash value both in the free spins and in the base game. The hotels can bring anywhere between 2x and 25x on the win, when it is part of a matching string of symbols. The house can be worth between 0.4x to 1x.

Monopoly slots are always fun to play and these always come with potential winnings that could mean either decent or big bucks for the luckiest players out there. Explore this game and see if it is one of the series that is better than the others. Whatever the conclusion is, Monopoly slots rule!

To engage in some Monopoly tycooning play this and other games of the series by claiming a welcome offer to one of the casinos on this page.

Monopoly Bring The House Down