Can you master the Monoply Utility Trails slot like you’ve mastered the Monopoly board game? This massive 8x7 grid slot machine from Scientific Games runs on the Cluster Pays mechanic. What’s more, the game boasts of bonus features and extras, so you’ll come across cascading reels, wilds, cash cards, and streak respins with modifiers. And on top of that, there is the Electric Company feature where property cards, houses and hotels can deliver some great prizes. In total, you can win up to 5,000x the stake. Find out more in our full Monopoly Utility Trails Slot Review. 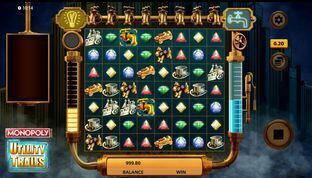 There are dozens of Monopoly-themed slot games available at online casinos, but there’s still a place for a new one. In the past, we’ve played games like Monopoly Electric Wins and Monopoly Megaways, but now it’s time for the Monopoly Utility Trails slot. Powered by Scientific Games, this game comes with a huge reel set accompanied by several features. In the list of bonus features, we have wilds and Wild Tracks, a Community Chest, the Water Works Bonus, and the Electric Company bonus, along with many scatters. 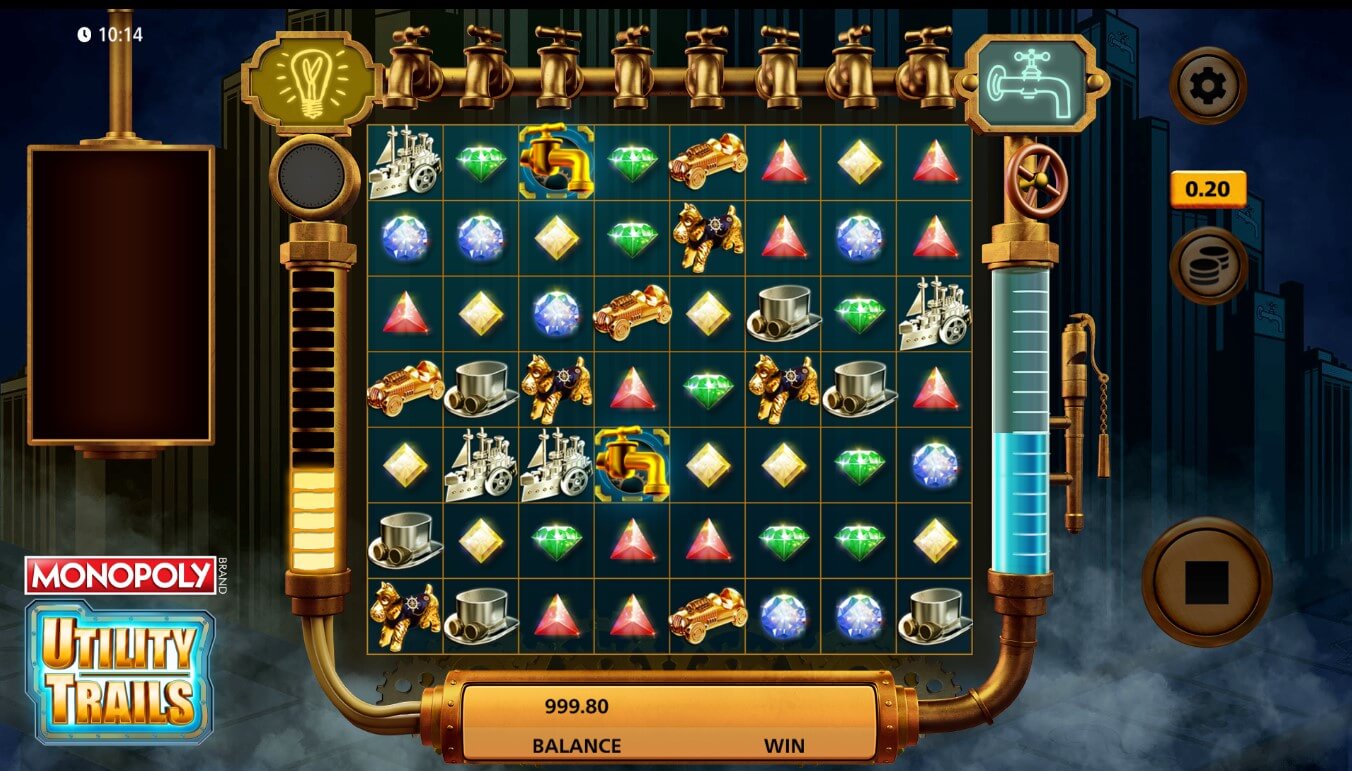 Monopoly Utility Trails is a new online slot from Scientific Games. As its title suggests, it’s a game based on the popular Monopoly board game, so you might be familiar with its design and gameplay. The Monopoly Utility Trails slot plays on 8 reels and 7 rows with a cluster pay machine. This means that in order to win, you have to form clusters of matching symbols or wilds, and there are no fixed paylines.

After a winning cluster is formed, the cascading reels feature is triggered which allows you to land more winning clusters in one spin. You can start spinning the reels of the Monopoly Utility Trails slot at stake levels that range from £0.20 to £4 per spin. Use the plus and minus buttons on the right side of the screen to set your preferred bet. Thanks to the bonus features, the Monopoly Utility Trails slot can deliver prizes of up to 5,000x the stake.

Regarding bonus features, SG has packed this Monopoly-themed slot with the innovative Wild Tracks feature which can turn the whole grid wild. What’s more, you can collect Water Works and Electric Company tokens as you play, and these trigger 2 special bonus features. Other highlights include Community Chest cash cards which deliver instant prizes. 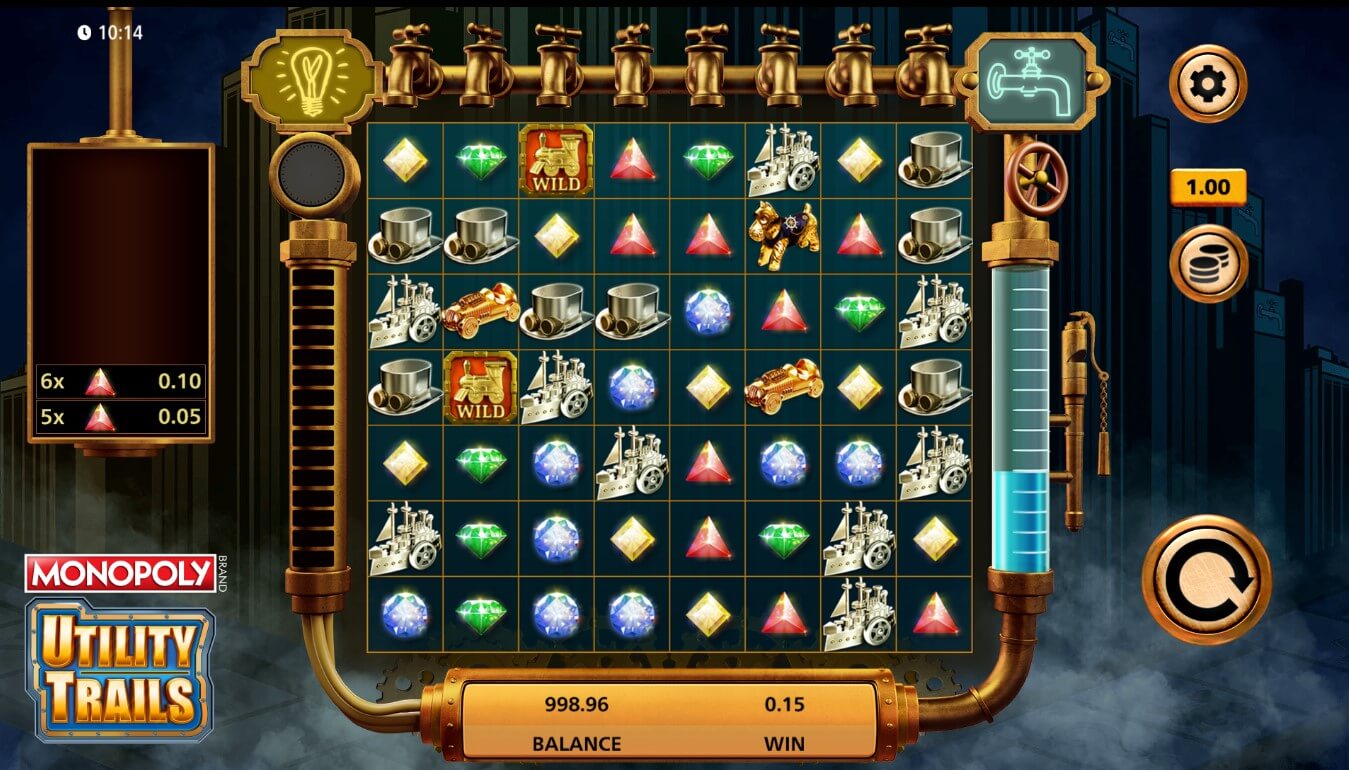 As it was mentioned below in our Monopoly Utility Trails Slot Review, the design of this game is familiar to players who have played the Monopoly board game. The huge game area is accompanied by water and electricity meters to the sides. It’s set in the middle of a city, within pipes and taps. All in all, the game has high-quality design, graphics and visuals, accompanied by a pleasant soundtrack.

The high-paying symbols are represented by the board game’s tokens - car, dog, hat, and train. On the other hand, the low-paying symbols are designed as gemstones in yellow, green, red, and blue colours. There are four types of wild symbols while the bonus symbols include community chest, water works, electric company bulb, and property cards.

The theoretical RTP of the Monopoly Utility Trails slot is 96.79% which is slightly better than the industry standard. What’s more, the game has a medium to high variance, so expect both small and bigger wins in your gameplay. The game can deliver a payout that goes up to 5,000x your total stake from a single spin. Here you can read more about the Variance, Volatility and RTP in online slots and see which model suits you best.

The Monopoly Utility Trails slot has a wide range of features and in-game mechanics, so you won’t get bored. It has straightforward gameplay but there’s a little annoying delay between the spins. Let’s explain all the features in more detail. 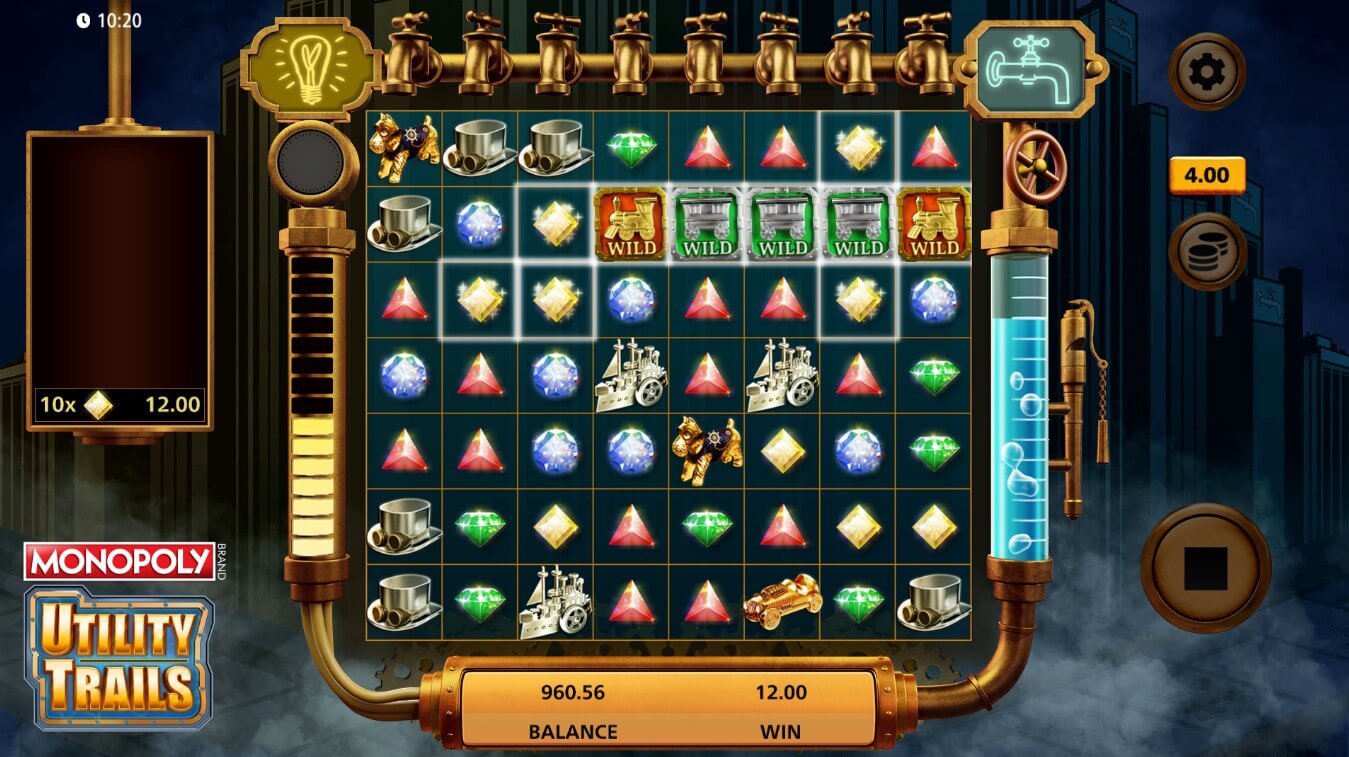 When you land 1 or more golden wild symbol in the same row or column, the Wild Tracks feature is triggered. All symbols between the 2 golden wilds will then be replaced by the silver carriage wild symbol and a new payout consideration is made.

The colossal Community Chest 3x3 symbols can randomly land on any spin in the base game. When landed, these symbols will trigger the Community Chest feature. Each Community Chest symbol will open to reveal a cash prize which can be anything between 5x and 1,000x the stake. Finally, the mega symbol explodes and triggers a new cascade. 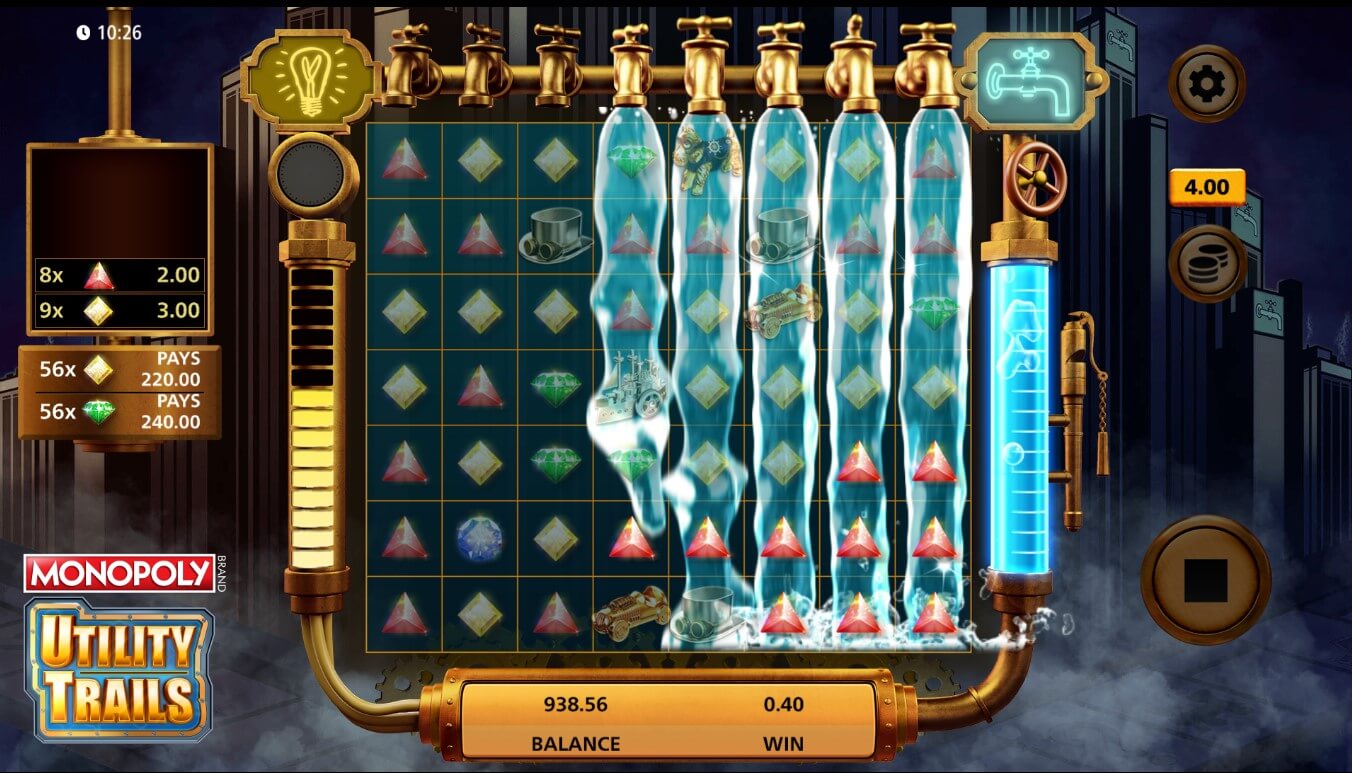 When you fill the meter on the left side of the reels with Electric Company symbols, you’ll trigger the Electric Company feature. During the feature, the standard symbols are replaced by the following:

You lose 1 life after a spin where no new Property Tile, Colour Tile or Chance Card lands. The feature ends when you’ve used all your lives. Then, the value of the Property Cards is added together and a payout consideration follows.

The Monopoly Utility Trails slot is optimised to work on all mobile devices. The game is developed with HTML5 so the 8x7 game grid will perfectly adjust to any smaller screen and any operating system. You’ll receive the same high-quality gaming experience when playing this game on mobile.

Is There a Jackpot on Monopoly Utility Trails Slot?

Scientific Games is an established developer that made impressive and high-quality online slots with various features and game mechanics. For example, check the 5 Treasures slot and learn something more about the Asian culture and tradition. This medium variance slot can deliver up to 2,840x stake payouts.

Another great game from Scientific Games is the Book Of Ultimate Infinity slot. It’s an Egyptian-themed game that has incorporated both the Infinity Reels engine and the “Book of” theme. Finally, check the Beetlejuice Megaways slot and take advantage of the Megaways mechanic which can give you over 200,000 ways to win.

Monopoly Utility Trails looks very good, both in terms of design and bonus features.The number of bonus features is huge so there’s always something going on. It’s a medium to high variance game so you have a shot at landing both low and high-value prizes.

Explore the Monopoly Utility Trails slot today and claim your bonus offer at one of our featured casinos.

Monopoly Bring The House Down