The ultimate result that could be had by the luckiest goal scorers out there is a maximum payout of 4000x multiplied by the winning bet, and this is on a medium variance and a RTP that is just above average. Football Glory by Yggdrasil Gaming has 25 fixed paylines and a number of extra features. 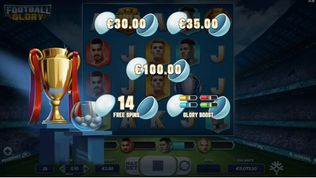 Online slots that are themed on the game of football for the most part aren't able to capture the essence of the real deal: raging kicks, sliding tackles, red cards and the like. If you decide to play Yggdrasil's Football Glory slot it's best that you don't expect much visuals.

On the other hand, this is a standard online slot that offers a reel adventure with the added kick of free spins bonuses and a number of reel modifiers that can have their big say in the game. Football Glory plays on four rows and five reels that spin across 25 always active paylines.

Like we said, the game has extra features which are triggered by the bonus symbol, at random or by filling the meters that each of the four players has to his photograph.

The game doesn't succeed in capturing the excitement that can come with football and there is more than one reason why. First of all, the visuals are missing, so it will be a tad difficult to attract true followers of the game to stay on Football Glory slots.

The surroundings to the reel-set are the awe-inspiring terraces of a football temple, crammed with spectators. These aren't quite lively, in fact they are as stil those attending a match in the fifth competition tier in Estonia (not to rag on their football or something).

At any rate, the gameplay does offer a certain dynamic. The symbols have been created to mimic a number of famous footballers and there are some emblems such as those of the wild symbol and scatter. So the game boils down to what it can do in terms of wins.

How to Play Football Glory Slot

If you have decided to put your boots on and your shin guards, just to be safe from killers on the pitch, you can start your football adventure with the push of the play button. This is located underneath the reel-set and under the player boost meters.

If you want to engage the game hands-free, you can put to use the autoplay button which is located to the right of the play button. Press that button to open up a list of the automatic spins presets. You can choose between 10 and 100 or the optional to-infinity button.

But before you make your first spin or spins in Football Glory slot it's best to check the amount of money you'd be waging per spin. This amount is displayed in the Cash Bet window, which is in the bottom left area. To the left of that window is the Coin Value setting.

You can change the bet by setting the coin value, which is the amount that the game bets per each of the paylines. The smallest value per payline is one penny, which amounts to a quarter of a pound per spin. The most expensive bet per spin is £125.00 which reflects £5.00 per payline bet.

How to Win Football Glory Slots

Wins occur with three matching symbols posting on the game's 25 paylines and these outcomes need to start on the leftmost reel. High-paying symbols in the game are the football players and the low paying are the high-cards.

The most valuable of these symbols is the player in the yellow kit. That symbol is worth 2.5x multiplied by the winning bet, when five matching symbols stop on a payline.

Football Glory slot has a wild symbol that substitutes for any of the standard symbols and there is a scatter/bonus that is represented by a trophy.

Where the symbol payouts are meagre the extra features compensate. The game has two bonus awards: Silver Cup and Gold Cup. These can trigger at random both during the base game and in the free spins.

In either instances and either of the bonuses, the lucky players can get free spoins and cash award in coins. The Silver Cup can bring between 10 and 1000 coins and 7 to 21 free spins in the base game.

The Gold Cup brings 250 to 10000 coins and also 7 to 21 spins, however these come with kickers such as the Glory Boost and the All Star Glory Spins.

During the bonus, each goal that is scored following a win, can result in wild symbols becoming sticky. Wins result in the meters being filled for each respective player.

Yggdrasil are likely going to release the game as a free play demo at online casinos that host demo slots. You can browse the casino reviews or claim a welcome offer to the right to discover the game as a demo.

Besides the lackluster graphics and having little to do with the real game of football, there are few iffy details here. This is a medium variance slot offering meagre payouts. Were it a low variance game we would give it a second thought. This way, the 4000x max payout depends on a long term play and having to endure the dry spells waiting for any of the bonuses to trigger.

Discover the Football Glory slots by claiming a welcome offer right from this page and play at top rated online casinos.