Golden Balls Steal the Jackpot is one retro game that aims to bring prizes to your pocket with the two jackpots and amazing gameplay.

Golden Balls Steal the Jackpot slot is one retro game that aims to bring prizes to your pocket with the two jackpots and amazing gameplay. With the old-school symbols on the reel set combined with up to date features, it is a very playable and entertaining game even if you don’t know the UK TV game show. The Golden Balls game uses a 5-reel, 3 rows and 20 paylines setup with the choice for coins ranging from 1p up to £10. Golden Balls Steal the Jackpot RTP rate is advertised as 97.58%.

As time goes by, it seems that retro games are getting more and more popular among modern video slot players, and developers tend to use it as a theme for their slots. Golden Balls Steal the Jackpot is one of them, and it is a nice retro game that uses old-style symbols with few touches of modern elements throughout the game.

Despite that the game was developed in 2015 by IGT, because of the theme, it looks like it takes place somewhere in the 80s. The graphics, however, point out that it is indeed a modern game, and the music quality deceive the classy songs. Blue is the dominant colour and every symbol is lit and shiny, waiting to give you lucrative win.

The symbols are the classy slot game symbols including the fruits such as the cherries, the lemons, plums and watermelons. The higher valued symbols are the devil board, the angel and devil symbols, the “Killer” symbol, which is also the highest-paying symbol in the game.

Apart from these standard game symbols, we can see the Wild and the Scatter symbol. The wild is the Golden Balls logo, and it's used as a substitute for all the normal symbols. It can also award you with the most lucrative prize of the game if you manage to land 5 of them on an active payline.

How To Play Golden Balls

When it comes to operating the game, Golden Balls slots is very straightforward since all game buttons are placed at the bottom of the screen and marked well.

As stated in the text above, there are five reels and 20 paylines in Golden Balls Steal the Jackpot slots, and it can be played with denomination from 20p all the way to £200.00 per spin. The maximum amount that you can win is 3000 coins. Although it’s a mix of a modern slot with a classy theme, you can find many of the options lacking in this game. There aren’t autoplay and max bet buttons as the only variables for you to adjust are the “Lines” and “Bet per Line”. Despite this, it’s a pretty interesting game to play, and most importantly, it can get you lucrative wins. 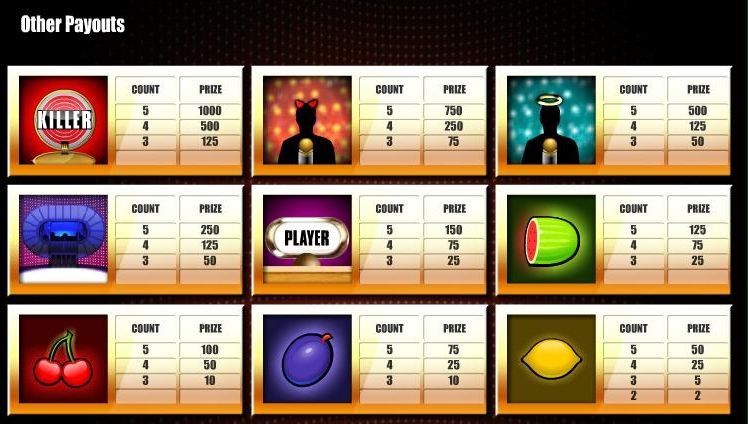 How To Win Golden Balls Slot

Winning payouts in Golden Balls Steal the Jackpot slots are awarded for landing symbol combinations of three, four and five matching symbols on the reels. The only exception is the lowest paying symbols in the game, the lemon, which awards payouts for combinations of two, three, four and five identical symbols on the reels. It is followed by the plum with 10, 25 and 75, the cherries with 10, 50 and 100, and the watermelon with 25, 75 and 125.

As stated in the text above, the highest-paying symbol in Golden Balls Steal the Jackpot slot is the “KILLER” with payouts of 125, 500 and 1000.

For a retro-themed online slot, Golden Balls game has an excellent bonus feature. Depending on the number of Scatter symbols on the reels, you can trigger a different bonus game. They go as follows:

If you manage to land three of the Scatter Symbols on an active payline, you’ll trigger the Big Win Bonus Feature. You will be presented 11 golden balls and you all you need to do is pick 5 of them. You can reveal either a cash price or the “Killer” symbol. The one you’d like to see is the cash prize since “KILLER” doesn’t reward any prize. At the end of the game, your win amount is added together and transferred to your balance.

Golden Balls Steal the Jackpot slot from IGT is an excellent retro-themed online video slot. Although it looks like a game from the 80’s, its rewards say that it is a modern slot game. With the possibility od landing two different jackpots, Golden Balls game is definitely worth the try.

Claim your welcome offer from SlotsWise and enjoy the gameplay of Golden Balls Steal the Jackpot!