Sonic Reels comes with three rows and six reels, however, these spin across 729 ways to win. This is a fruit-themed slot game that has a powerful sound system and an array of extra features that can lead to payouts of up to 5400x from the same spin. 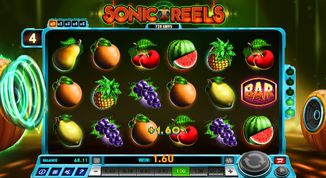 Wazdan have created some extraordinary online slots, such as 9 Tigers and Black Horse Deluxe, and they are still riding on the cusp of unbridled imagination with the Sonic Reels slot. This audacious production features stereo wins and some powerful amplifiers, which can cause winning outcomes to occur both left to right and right to left on the reel-set.

The game comes with a wild symbol and a scatter, which is responsible for triggering the free spins bonus. Two acumulator symbols can increase the amount on the bonus counter which trigger the speaker bonus. Winning outcomes can occur on adjacent reels with the best payouts involving six matching symbols.

In terms of the graphics design the game does all that is counted as a superb reel adventure. Wazdan's layout is famous for being incredible close to that of Play'n GO but no one minds. Within the frame there are the symbols that comprise this fruit-themed slot: pears, pineapples, grapes, cherries and the such, with the addition of BAR, pumpkins and the Wild symbol.

Sonic Reels slots doesn't go too crazy with the animated bits. In fact, there are very few animated events on the reels. On the other hand, outside the reel-set are the two pumpkin-shaped speakers that can blast powerful sound and cause rifts and shifts inside the reels, whenever the counter has been filled to the max to trigger this mode.

An electronic tune sits quite right with the gameplay, so much so that it can even pass for a dancefloor track.

How to Play Sonic Reels Slot

Wazdan are well known for two other things in addition to some of their most memorable productions. Their games have two options that the players can't find on most other slots. There is the fast spins mode changer which lets you pick how fast the reels ought to spin, with the available modes being turtle, hare and horse.

Making the spins gallop can go through 500 automatic spins in the blink of an eye. Another thing that's even more exciting is the variance changer. There are three levels - low, medium and high, so that players can take on this reel adventure whichever way they want, and switch to another variance level at any given time.

Sonic Reels slot designates the bets in credits, and the online casinos can ascribe a specific range of values to both ends of spectrum. Most frequently, Wazdan games have 10 credits for the smallest bet, which translates to ten pennies, while 100 credits equal one pound, and so on.

The highest bet is 10000 credits, which amounts to £100.00 per spin. Regardless of the amount of the bet that was selected, Sonic Reels is going to spin across all 729 paylines.

Opting for the autoplay mode is quite easy and beneficial to those who wish to kick back and relax while the game spins the reels on its own. The autoplay comes with a maximum of 1000 automatic spins and has an advanced menu for optional stops.

How to Win Sonic Reels Slots

Winning in the game requires at least three matching symbols to fall on adjacent reels, starting left to right in the base game. The game has a wild symbol that substitutes for all but the scatter, which is the symbol that is responsible for triggering up to 25 free spins.

In terms of payouts, the most lucrative symbol on Sonic Reels slot is BAR, paying 50x multiplied by the winning bet for six matching symbols. The red seven pays 20x for the same outcome and the lemon and orange pay 10x and 6x respectively.

The pumpkin symbols active the Speaker Bonus. Collective five of the left-facing pumpkin symbols trigger the left side bonus and those facing opposite trigger the right. When five have been added to the counter, each win on the reel-set causes the reels to move one position to the side that is opposite of the speaker.

When this takes place, the first reel draws new symbols and each movement of the reel is a free spin, or a respin, but takes away one pumpkin from the meter. Wins that occur at the first respin have a multiplier of x5 and go down by one as the counters are spent.

The speaker bonus can occur during the Sonic Reels free spins bonus to trigger the game within the game.

Wazdan are promptly releasing their games as free play demo slots, so that some of the players can test the game and decide whether to play with real money.

With a maximum payout potential of more than 5000x and a set of features, the game is quite exciting to play. The pumpkin speakers don’t come around very often, but when they do they can unleash a wave of multiplier wins.

Discover Sonic Reels slots by claiming a welcome offer right from this page and play at top rated online casinos.