Spirits Of The Valkyrie Slot

Spirits of the Valkyrie is a Novomatic slot that delivers a high-speed action on three rows and five reels. The game has multiple multipliers, edxpanding wilds and a free spins feature. Start playing on 20 active paylines and towards a maximum win of 250,000x and on bets that start at 0.20 per spin. The game's return to player outcome is 96.02% 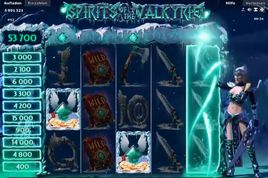 Spirits Of The Valkyrie Slot Online

Play the Spirits of the Valkyrie slots for a chance to win the game’s top cash prizes, and trigger multiple in-game modifiers, as well as the free spins bonus.

Play on the magical reels of Spirits of the Valkyrie slot and witness the spectacular sword-wielding prowess of a winged Valkyrie. The deity that chooses which warrior lives in battle and which goes to Valhalla has made its presence known on this slot game, developed by the slots experts of Green Tube - Novomatic. The five reels are able to display blocks of expanded symbols, nearly all of which represent the sharp accoutrements that are usually found inside a battle chest. This is what adds a rock-n-roll edge to how the game looks and feels.

The overall gameplay of Spirits of the Valkyrie is a thrilling display of the best slots wizardry one could ask for. There are many Norse and Viking-inspired online slots, most good, admittedly, but this one has a special look and feel to it. The stack of prizes to the left of the reel set is something you can anticipate filling up as you progress through the bonus games. On that subject, there are four bonus features that impact the arrangement of symbols on the reels, add, change or remove random symbols in order to increase the chances for bigger and better wins.

So if you are ready to enter this battle and let your fortunes be decided by the awesome Valkyrie, the check out these further details and then head on to claim a welcome bonus and play the slot with real money.

How to Play Spirits of the Valkyrie Slot

Setting up for the gameplay requires selecting a value from the window where the bet per spin setting is located. The Start button sets the reels spinning and there is another button next to it that can be used for the gameplay - the Gamble button, which brings up a game of chance in which the players have to guess the card color.

Furthermore, on the Spirits of the Valkyrieslots there is the autoplay option that lets the players select a number of automatic spins and there is the option of setting a win or loss limit. The game's paytable is pulled up from the bottom left corner of the screen. From it, the players are able to read the symbol wins, information about the bonus features and further details that are relevant to the gameplay.

Otherwise the gameplay occurs on five reels, three rows and 243 always-active paylines, which are the hosting mechanism for the in-game random game modifiers, which feature in addition to the Spirits of the Valkyrie free spins.

How to Win Spirits of the Valkyrie Slots

The game offers a litany of modifiers that are amazing both in terms of the winnings and in how they manifest graphically. The four modifiers are Blade of Fury, which causes Wild symbols to appear on the reels at a random number and position. Colossal Magic is the hex that makes the battle symbols cover an entire reel or more then one. Ice Blade occurs when the Valkyrie slashes symbols from the fifth reel and then draws another slash with the sword to distribute the same symbols horizontally. Last is the Shockwave Slash, which causes the wins to be given another chance by adding additional symbols onto the reel set - if these click and match with the winning combination, then the win gets bigger and better for the player.

As the players progress through the game, the winnings will influence the situation on the Win Stack Bonus. All wins will nudge the meter higher and that creates boons for the gameplay and increases the winnings, the higher the meter has been filled.

The Wild symbol is represented by the book, and it is able to substitute any other symbol of the game, except the bonus scatters. And the scatter symbol says plainly Free Spins on it, and it landing in four instances will trigger the free spins bonus.

Spirits of the Valkyrie Free Spins

To trigger the free spins bonus feature only one things needs to take place: see three, four or five Free Spins symbols on reels one, three and five. This will trigger ten free spins, where all of the potential winnings will be multiplied by the triggering bet. What is more, the winnings are added to the Win Stack and go towards that bonus. The game’s 243 ways to pay are a natural arrangement for a high-octane game like this, which means all winnings are paid on adjacent lanes.

To experience the might of Valkyrie start your gamers adventure on the Spirits of the Valkyrie slots by claiming a welcome bonus, right from this page.