The Tiger King Deluxe slot plays on five reels, three rows and 25 always active paylines. It comes with a range of excellent payouts that can be seen on the dynamic paytable. The game has three features of which one is a free spins bonus that reaches up to 5x multiplier, and can be retriggered. The symbol transformation upgrades two of the picture symbols into another two picture symbols that pay more. The game's theoretical RTP is 96.00% 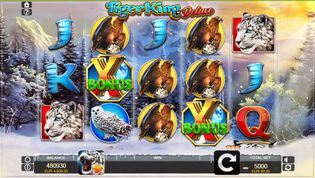 Play the Tiger King Deluxe slots for a chance to win the top payout of 1,500,000 credits or many other hefty prizes.

A Siberian tiger lurks the reels of the Tiger King Deluxe slot. This magnificent animal is ready to pounce on the reels whenever it is the wild that completes a winning outcome. Besides the tiger there are four other animals that roam the vast reaches underneath the northern lights that adorn the taiga. These animals can transform into another, thus exhibiting their shamanic powers and with it, the possibility for a big win.

When the entire reel-set of three rows and five reels is covered by tigers, the Tiger King Deluxe slots makes the big payout of 15,000x. However, this isnt the only prize in the game, as there are symbol wins in the base game which can pay amounts that are quite decent. Besides these winnings, the game has the Animal Replace Feature and a free spins bonus that has a multiplier of x5.

The developers behind this release are FUGA Gaming. Even though they aren't a name that comes to mind when you think of online slots, this company has done quite a decent job in designing this game. What we have on the five reels are 25 always active paylines and a standard way of play that pays from left to right.

The design features are quite all right. Nothing special and out of the ordinary, but still, done in a very professional way and with attention to detail.

The animal symbols are quite realistic, especially the closeup pictures of the leopard, tiger and wolf. Even the royal cards have been made in style.

The background on the Tiger King Deluxe slot is a forest covered in snow - a landscape at sunset, with the sun's rays moving just slightly to create a nice effect of movement and energy.

All this is to say that the game is visually quite enjoyable, besides the online casino gaming experience it provides.

To play the game you need to set the reels spinning. Press the Spin button to do that, or use the autospins option, which can be accessed from the button in the very bottom right corner.

You can use the number presets up to 100 to set the number of automatic spins, and you can additionally set the optional loss limit or single win limit. When ready for some reel action, hit the Start button.

But before you do any of that you should set the total bet, which is the total amount you'd be wagering with each spin. The smallest bet that is available is £0.25, which translates to one penny multiplied by the line bet.

On the other end, the biggest bet is £50.00 and divided by the 25 always active paylines, the line bet comes to £2.00 per winning payline.

And last but not least, there is the paytable that displays all of the symbol pays plus gameplay and bonus feature information. Access the paytable by selecting the 'i' button from the bottom left corner.

The game's symbols are displayed in the paytable along with the wins for each instance. Since the paytable is dynamic, you get to see the actual symbol payouts as you raise the total bet.

The most lucrative symbol is the tiger, however it pays only in one outcome - when it fills the entire reel-set. This represents the Tiger King Deluxe jackpot. On the biggest bet, the white tiger pays 1,500,000 credits

Winning the game presupposes making big wins with either excellent outcomes on the reels with a small wager, or moderate outcomes with a big wager. At any rate, when you land five matching symbols on a payline you get the optimal prize.

The Tiger King Deluxe slot also has a number of features, including free spins and collosol symbols, so we'll take a look at these and see how they can benefit your adventure on the reels.

The wild symbol falls as stacked on reels two and four. When this happens the stacked symbols stick for the next spin for an additional two to nine Extra Wilds to come on the reels, on random positions. This certainly improves the chances to land the Tiger King Deluxe slots jackpot.

The game offers quite a decent gaming experience, however, it is the potential prizes that are even more exciting. With three features and colossal symbols, the game can really deliver the reel-action that many players crave. One thing we aren’t sure is the Tiger King Deluxe variance, but it looks like it makes both small, medium and big pays, so we’ll call it medium-high variance slot.

Discover the magic of the white tiger when you claim a welcome offer at either one of the best UK online casinos, right from this page.