Sicover the Aurora Borealis phenomenon on the Aurora Wilds slot by Microgaming. This is a 10 payline slot with five reels and a in-game progressive jackpot prizes. Play with bets that start as low as 0.10 and up 100.00. Land the golden disc symbol to trigger a bonus feature and get re-spins on the expanding Wild symbol, which stays in place for the spin. 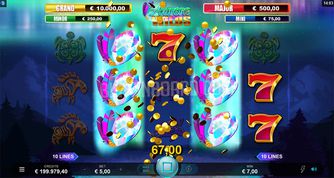 Experience the Northern Lights on the Aurora Wilds slot and play for a chance to win cash prizes or one of the in-game progressive jackpots.

The native tribes that populated the northernmost frontiers of the northern hemisphere got to enjoy one of the most spectacular shows on earth - the Aurora Borealis, also known as the Northern Lights.

Aurora Wilds has ten always active paylines that are the backdrop to five reels and three rows. The game is a marvelous display of the colors that consist of the luminescent glimmer of the phenomenon, so with each win there is an animation that matches the event in effect.

No matter the potential for winning outcomes and the variance and the RTP, Aurora Wilds slots is a pleasant thing on the reels and both pro and novice players will discover a true gaming experience.

How to Play Aurora Wilds Slot

To start your adventure hit the spin button once for a single outcome on the reels. If you wish to set the game in automatic spins mode, feel free to do so by using the Autospins button. This also lets you set a win or a loss limit, so it helps mind the balance.

The bets provide a long range of options for the bet per spin. The smallest wager is £0.10 per spin and the most expensive wager is £100.00.

Either bet can trigger one of the four jackpots that are in-game progressive and have a cap of a certain amount.

To view the symbol pays refer to the paytable which can be reached from the upper area of the screen on Aurora Wilds slot. This is where you can view how the bonus features are triggered, the game rules and the payline arrangement.

How to Win Aurora Wilds Slots

The defining feature of the game are the wild symbols, which can expand to cover an entire reel and that comes with a greater chance for a winning outcome. Furthermore, the expanded wild will provoke a re-spin event with the wild remaining in place as such.

The bonus feature is triggered by three scatter symbols landing anywhere on the reel-set. This symbol is represented by golden disks, and in the event, they will invite the bonus wheel which is spun for a potential cash prize of a jackpot prize.

The game offers plenty of reel action. Those who’ve seen the sneak preview at gaming expos will know. Microgaming are going to have this game on their casinos in the coming couple of months, so brace yourselves until then, or call favorite one of their other online slots.

Claim a welcome offer to play games that are similar to Aurora Wilds, and other Microgaming slots releases. Start from this page to play at one of the best UK online casinos.