The slot experts have selected what is perhaps the best layout for this kind of a game, a grid of five horizontal rows and five vertical reels which spin across 50 paylines. This setup provides the ideal environment for the multipliers and the rolling reels payout system, which is essentially a collapsing/cascading win system. 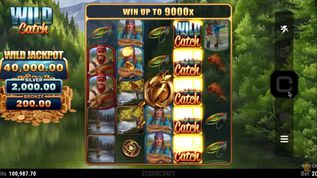 If you are a fishing enthusiast who is lacking a big wild river at a reasonable driving distance, there are plenty of angling games for the video game consoles. Another way of getting close to the thrill of reeling in a big one is by playing the Wild Catch slot. The game was produced by Stormcraft Studios and comes by way of Microgaming.

Wild Catch has a theoretical return to player of 96.30% and high variance. The maximum payout potential is no less than 9000x multiplied by the winning bet and helps towards the hefty payouts is provided by the wild symbol. The wild has been given extra importance because it does more than just to substitute for the standard symbols.

This isn't the only feature that comes with this Microgaming/Stormcraft Studios release, so let's go into more detail.

Those players who are lucky enough to discover this game are going to find one of the best fishing-themed slots that have been released in the past five years. The setting is what appears to be the Alaskan wilderness and what we have for a theme is somewhat of a romantic couple's fishing trip on a big river.

Wild Catch slots has few high-paying picture symbols that portray the couple enjoying themselves on the river and posing with their big catch. The remaining symbols consist of fishing inventory and a wild symbol that is the game's logo. The game is lively and has a number of cool design features. Wins on the paylines are marked by a cool video effect and the bonus feature trigger is also announced in a big way.

How to Play Wild Catch Slot

Stormcraft Studios have several memorable releases under their belt, such as the Jungle Jim and the Lost Sphinx slot, and it looks like they have settled for the perfect layout for the controls, which makes them differ from other developers.

Stormcraft are the studio that have a digital watch-shaped controls menu on the right-hand side of the reel-set. In the middle is the spin button, above it is the thunder button which toggles on the fast spins, and at the bottom is the menu button, which leads to some additional settings.

Wild Catch slot shows the current balance amount in the bottom left corner of the screen and opposite it, the players can find the bet amount. to the left of the reels are the three jackpot tiers: Wild Jackpot, Silver and Bronze. Their amounts are dynamic and always show the potential payout according to the active bet.

The players can choose the autoplay option by selecting the button underneath the thunder symbol. This opens up the menu where you can select from the automatic spins presets and add the optional conditions that cause the autoplay to stop when they've been met.

The bets on Wild Catch range between 20p per spin for the minimum amount and £20.00 for the maximum. The full availability of bets can be selected from the coin stack button underneath Spin.

How to Win Wild Catch Slots

Wins in this game are made with at least three matching symbols showing on one of the 50 paylines.

It is possible to land more than one payline win that results from the same spin. What is more, the payout system can lead to multiple cascades, meaning, the winning symbols are take out of the reel-set and replaced by a new set. Every time there is a win outcome the game continues with another cascade.

This is the reason why the payouts on the Stormcraft Studios Wild Catch slot smaller than with standard payline slots. The most lucrative symbol is that of the angler, carrying a value of 10x multiplied by the winning bet.

What makes the game more engaging and potentially rewarding are the extra features, but also the three jackpot prizes.

The wild symbol substitutes for all other, except the scatter, but has few other extra features about it also. This symbol can appear as a stacked wild on an entire reel. When the wild becomes the Splashing Wild at random, the three reels in the middle become stacked wild reels, which is a guaranteed win on at least one payline.

The scatter symbols pay a certain amount and trigger free spins. Three, four and five of the bass trophy symbols stopping on the reels bring you to a selection of three different free spins modes, two of which are locked until they become available, but you need to play the game longer for that to happen.

The three choices are different fishing locations that are a trade-off between the number of free spins and the multiplier amounts.

Stormcraft and Microgaming are releasing this game as a free play demo slot too. This way players can play it with free, non-paying credits that can help people decide whether to play with real money.

Like we said, one of the best fishing slots. Comes with a wild symbol that packs extra abilities, three jackpots and a wild ride on the rapids with the free spins feature.

Discover the Wild Catch slots by claiming a welcome offer right from this page and play at top rated online casinos.