The players can play the Gems of Adoria and enjoy the benefits of extra features, such as Flipping Symbols and Striking Wilds. The standard bonus feture are the free spins, which can be triggered by landing three symbols on the reels. The Adoria  layout is a standard three rows and five reels, but there are multiple features that are quite unique. 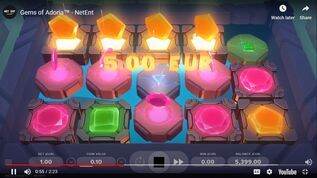 NetEnt are known for creating worlds and for the present game they have deployed those skills and let their imagination loose. The game is called Gems of Adoria slot, but despite the mysterious land sounding type of a name, it has very little to do with epic adventures. Insted, Adoria is an island that is inhabited by precious gems.

First off, the graphic design is quite amazing and looks like it can rival NetEnt's famed Starburst slot's gameplay, at least in theory. The game covers all aspects of a gaming experience and offers a high variance and a theoretical return to player of 96.13%, while the maximum payout potential can reach several thousands.

The graphics design is unique because of the option to view the game from a pivoting camera, which assumes a bird's view of the reel-set. The angles that the game can take up are quite exiting as are the video effects that add an edge.

Each win outcome is marked by the respective gems shining and glittering, however, big wins are marked by a flurry of special visual effects. The wild and scatter symbols are fully alive, in the manner of NetEnt's production skills.

Gems of Adomira slot has a musical theme that reminds of a very light-hearted epic adventure soundtrack, possibly inspired by a video game that belongs in the same epic/fantasy utopia.

Start the game with the push of the spin button which can be found in the center of the bottom area, just underneth the third and middle reel.

Gems of Adoria follows the vein of most other online slots by the same company, and the same is evident here. This is regarding the layout which is in the same familiar plaes.

The fast forward button causes the reels to spin and stop faster. To the left of the Spin buton is the one for autoplay and there are the betting options.

It is best that you start playing Gems of Adoria slot with a bet that matches your style of play, your regard for this gaming adventure and the budget. Find the ideal bet amount by scrolling through those that are available. The smallest bet is the game are only 15p and the most costly bet per spin is 150.00 per spin.

What is more, the players can enjoy he autoplay mode if they want to just kick it back and relax. The menu that opens up comes with a set of additional options which help mind the balance spend.

How to Win Gems of Adoria Slots

Winning at the game requires three or more matching gems to occur on any one or more of the 15 fixed paylines. The gems are divided in high-category and low-category which are easily discerned because the high-paying are the symbols which contain the bigger geometric shapes.

The maximum payout which can occur from a single spin is 500x multiplied by the winning bet and the range of bets. The bet is split by the number of paylines and the symbol payout is the result of the payline bet multiplied by the amount.

Or in simple terms, the high-paying class of symbols has values between 6x and 15x multiplied by the winning bet. The wild doesn't pay but can substitute for any of these symbols in a winning outcome. The scatter symbol doesn't pay either, but triggers the free spins bonus.

Gems of Adoria slot has a theoretical return to player of 96.13% and a low volatility, so payouts of small and medium amounts can be expected occurring far more frequently than big wins.

The game has two reel modifiers and one bonus feature. The first is called Striking Wilds and is a random event that causes a number of wilds to appear on the reels. The second occurs at the end of any spin in order to create symbol blocks on two, three or five reels; this rearranging of the reels can improve the chances for a win outcome.

And there is the free spins bonus. Three, four or five scatters bring about 10, 20 and an amazing 50 free spins. Perhaps this is where the game can give its most, but five scatters never come around too often.

The game is all about gems, and gems there are plenty in the world of online slots. Naturally NetEnt are releasing the game as a free play demo so that the players can give it a try.

Not too bad for a low variance game. 15x multiplied by the bet for the highest paying five purple symbols seems quite alright, but on the other hand, three-symbol payouts are abundant and low. Thankfully, two modifiers exist so when they hit, we could say that a win is almost guaranteed.

Discover the Gems of Adoria slots by claiming a welcome offer right from this page and play at top rated online casinos.