The xWays Hoarder xSplit slot takes place in a futuristic world after a nuclear apocalypse. There, you’ll join Hovenberg, Karen and the Moonshine King on a survival run. The action takes place on 5 reels where the number of paylines can reach 95,760. There, a brand new xSplit Wild feature is combined with the xWays mechanic to produce different features and huge payouts. In total, you can win 11,030x the stake. Find out more about this action-packed slot machine in our full xWays Hoarder xSplit Slot Review. 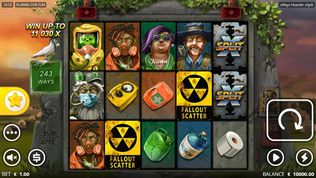 Nolimit City introduced another slot machine that features the xWays mechanic. After having titles like Infectious 5 xWays and East Coast vs West Coast, we are now heading to a post-apocalyptic location.

Thanks to the xWays ans xSplit Wilds features, the reel action here can get pretty dynamic. While you spin, you’ll be able to trigger Bunker Raid and Wasteland Free Spins to end up with 11,030x stake payouts. Discover more in our in-depth xWays Hoarder xSplit Slot Review. 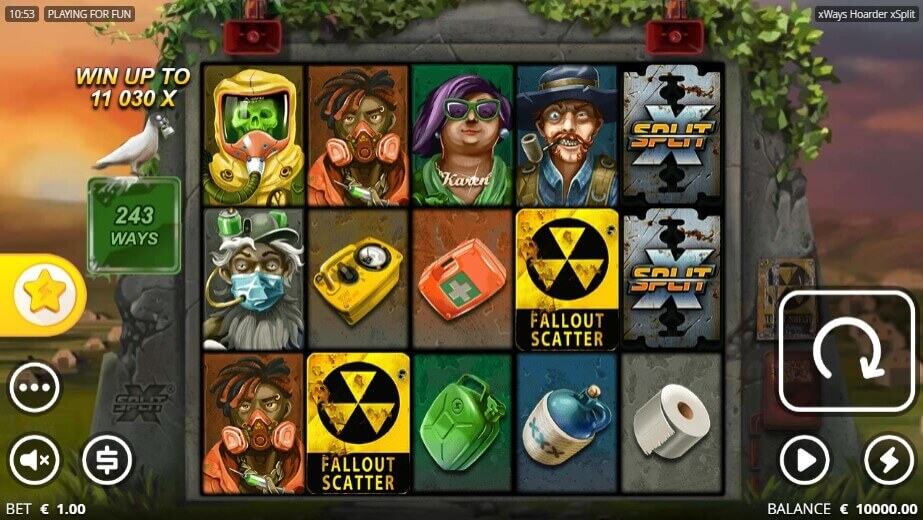 xWays Hoarder xSplit is a new online slot from Nolimit City. As its title suggests, the game incorporates two mechanics - xWays and xSplit. You’ll start playing on 5 reels with 243 paylines, which can increase up to 95,760.

To start playing this innovative game, make sure to adjust your bet per spin. The available betting options in the xWays Hoarder xSplit slot range from £0.20 to £100. So click on the dollar button located in the left corner below to adjust your preferred stake. Winning combinations are formed by landing 3 or more matching symbols on an active payline, starting from reel 1.

The maximum win you can take from the xWays Hoarder xSplit slot is 11,030x the stake from a single spin, which is excellent. That can be achieved through the bonus round, which includes xWays, xSplit Wilds, Bunker Raid and Wasteland Free Spins. Check our bonus section below to learn how to trigger them.

The xWays Hoarder xSplit slot has a dystopian, post-apocalyptic theme. Hovenberg, Karen and the Moonshine King are among the survivals. The reels are surrounded by bushes and there’s a lot of poisonous gas around. That’s why the characters on the reels are wearing masks. Overall, it’s a game with an impressive design and high-end graphics. 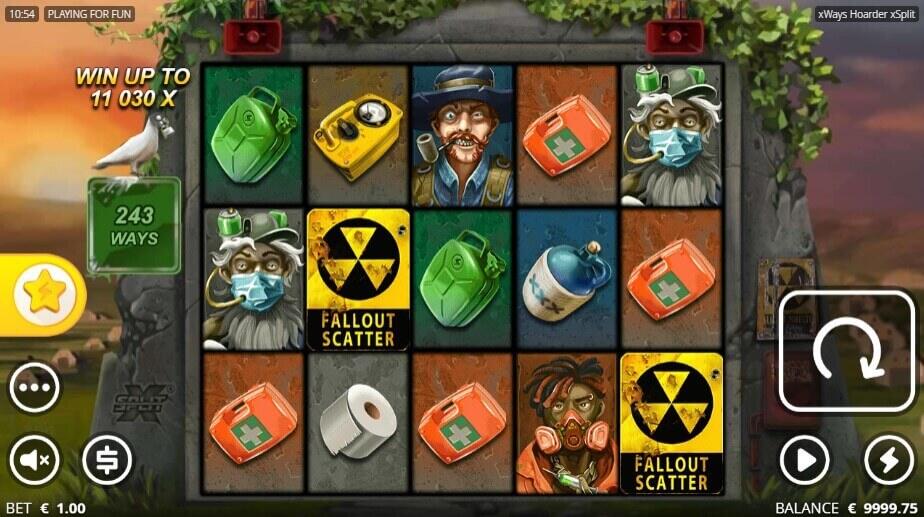 The reels include low-paying symbols designed as a toilet roll, a petrol can, a Geiger counter, Med kit and a bottle of moonshine. On the other hand, the high-paying symbols include Karen, Moonshine Michael, Gordon Geiger, Dr. Wayne and Terry Trash.

Apart from the regular symbols, you’ll come across 2 Fallout Scatters - normal and super. They trigger the bonus round. Finally, the xWays and xSplit Wild symbols are triggering the respective features and have key roles in the whole gameplay.

The theoretical RTP of the xWays Hoarder xSplit slot is 96.14% which is even better than the industry average (96%). Plus, the variance is high, so you’ll land less frequent and more valuable wins.

The maximum payout potential of the xWays Hoarder xSplit slot is 11,030x the stake, achievable through the bonus features. You can always check our Variance, Volatility and RTP Guide to learn more about these metrics.

xWays Hoarder xSplit has such dynamic gameplay that it might get confusing sometimes. In total, there are 4 main features to take advantage of. These include xWays, xSplit Wilds, Bunker Raid Spins, and Wasteland Free Spins. Make sure to read how to trigger them below, in order to not get confused when playing the xWays Hoarder xSplit slot.

Central to the gameplay of the xWays Hoarder xSplit slot is the xWays mechanic. It triggers when the xWays symbol lands on any of the reels 2, 3, and 4. The symbol will land marked with 2x, 3x or 4x, which indicates the number of hidden symbols. 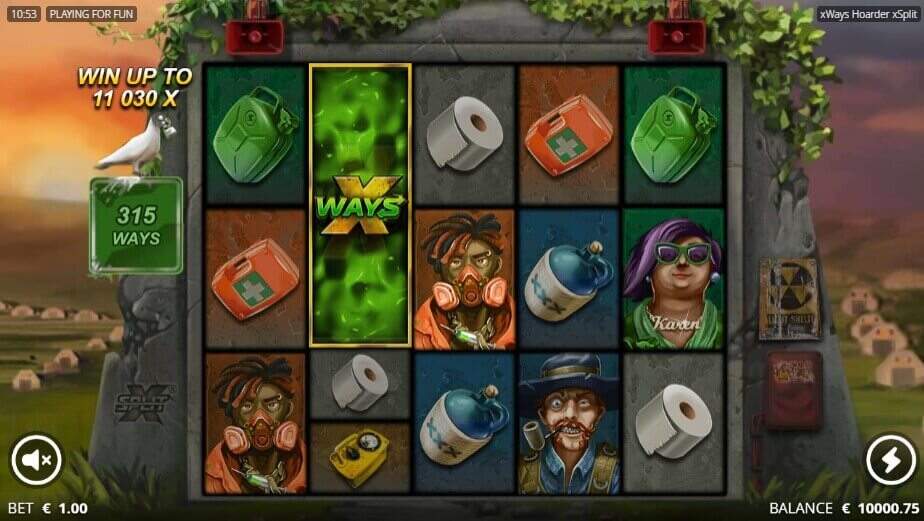 xSplit Wilds is a new feature included in Nolimit Slots. The xSplit Wild symbols can land in the base game on reels 3, 4, and 5. Any time they land, all symbols to the left of xSplit Wild are split in two. This will help you to easily form winning combinations. 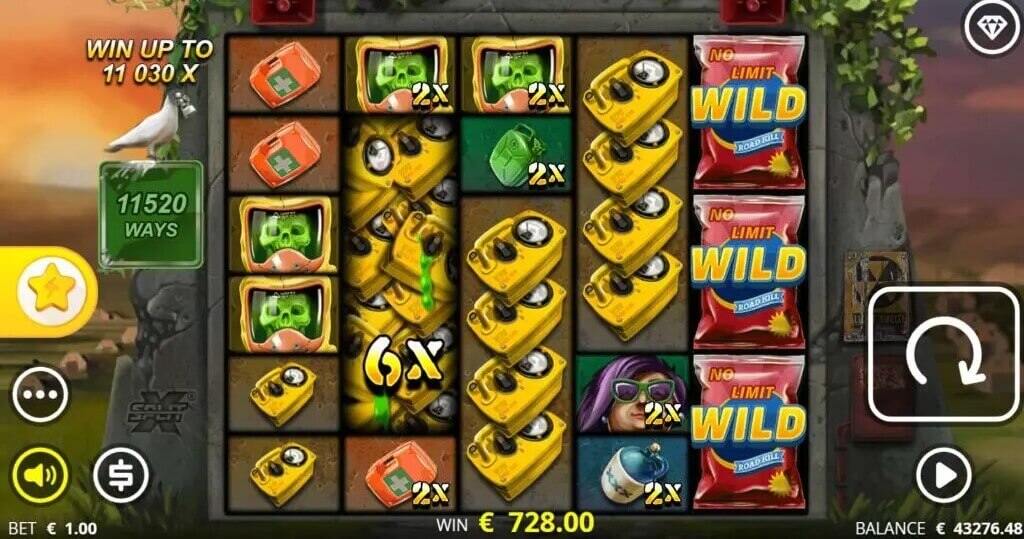 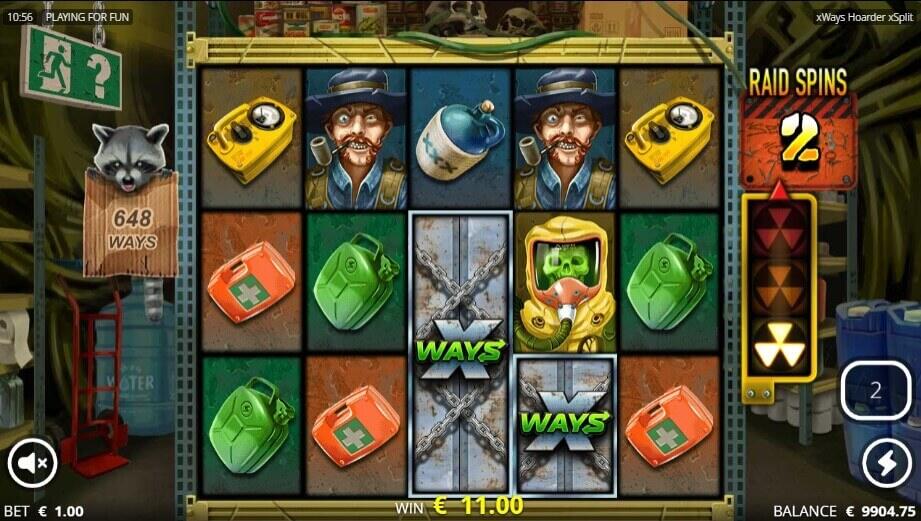 Every time you collect 3 xWays symbols during the feature, you’ll level up. Then, the lowest-paying symbol will be removed from the reels. In total, there are 3 Hoarder Levels.

If you manage to reach the maximum level, you’ll trigger the Wasteland Free Spins Feature. Only 4 symbols will land during this feature, all of which will be high-paying. This will help you form winning lines more easily and win bigger payouts. 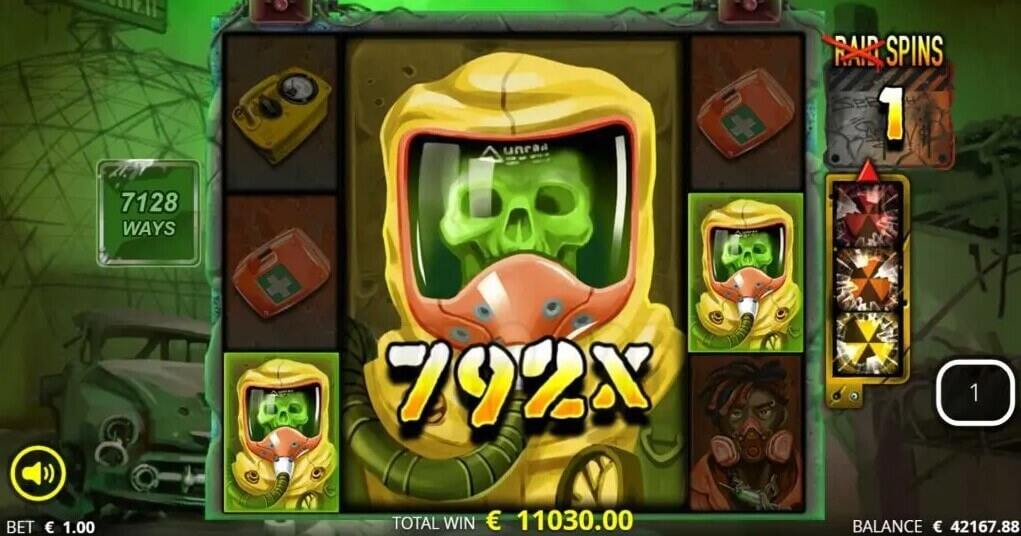 If you prefer playing online slots on the go, you’ll be glad to know that the xWays Hoarder xSplit slot is mobile-friendly. It is built with HTML5, meaning it works without issues on any mobile device and any operating system. Every aspect of the game works seamlessly when playing on a smaller screen.

Nolimit City is one of the providers that revolutionise the online slots industry. While other developers are producing fruit or Egyptian-themed slots, Nolimit City is going further. For that reason, if you want to check some other games from this provider, we have a few recommendations:

El Paso Gunfight xNudge - this game is a homage to the famous five-second El Paso gunfight that happened in 1881. With 8 bonus features and xNudge wilds that trigger multipliers and transform symbols, there are more than 43,000 ways to form a win.

Fire In The Hole - in this slot, you’ll get the chance to spin and win collapsing symbols, wild substitutions, xBomb and Wild Mining modifiers as well as a Lucky Wagon Spins round. This explosive slot machine can deliver massive payouts of up to 60,000x your bet.

San Quentin - this slot is powered with an xWays mechanic and features that include Splitting and Jumping Wilds, Lockdown Free Spins, Enhancer Cells for a possible win of 150,000x your bet. It has one of the highest payout potentials of a non-jackpot slot genre.

Like the other games in Nolimit City’s portfolio, the xWays Hoarder xSplit slot is filled with an exceptional design and innovative features. The introduction of both xWays and xSplit Wilds mechanics make the gameplay more complicated, but once you learn how they work, you won’t have issues. And on top of that, the free spins features with the huge payout potential deliver the best reel experience.

Discover the xWays Hoarder xSplit slot by claiming a welcome offer right from this page and play at top-rated online casinos.