Fire In The Hole Slot

The Fire In The Hole slot from Nolimit City takes you deep underground into a gold mine to search for hidden treasures. There, you’ll get the chance to spin and win collapsing symbols, wild substitutions, xBomb and Wild Mining modifiers as well as a Lucky Wagon Spins round. This explosive slot machine can deliver massive payouts of up to 60,000x your bet. Find out more about this highly volatile slot in our Fire In The Hole Slot Review below. 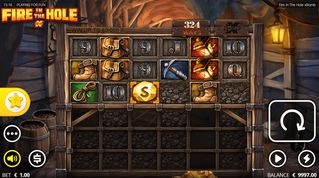 Fire In The Hole Slot Online

In the Fire In The Hole slot, you’ll have a task to detonate an enormous bomb with massive wins of 60,000x the stake. The action starts on 6 reels and 486 ways to win which can explode and deliver up to 46,656 active paylines. Highlights here include the Collapsing Mine feature, the xBomb Wild Multiplier feature, the Wild Mining feature, and the Lucky Wagon Spins feature. We’ll explore all of these features in more detail below in our Fire In The Hole Slot Review. 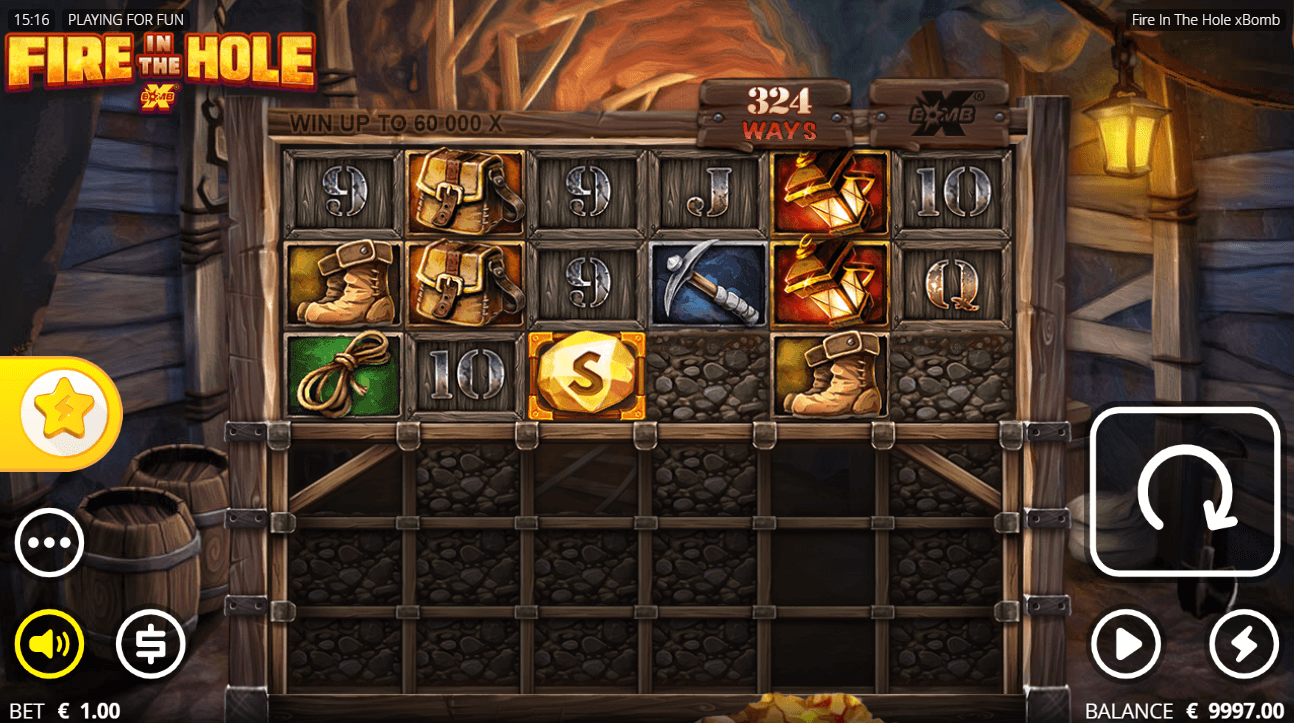 About Fire In The Hole Slot

Fire In The Hole is another slot machine from one of the most reputable developers - Nolimit City. It’s a mining-themed game that takes you on an explosive reel adventure with plenty of features and extras. The action in the Fire In The Hole slot starts on 6 reels, 3 rows and 486 ways to win. However, the Collapsing Mine feature allows the rows to explode and increase to deliver up to 46,656 ways to win.

You can start playing the Fire In The Hole slot at stake levels that range from £0.20 to £50 per spin. Just click on the Dollar sign to see all available options and make sure to select your desired bet. Winning combinations are formed by landing matching symbols on 3, 4 or 5 adjoining reels, starting from the leftmost reel. And as we’ve mentioned above, the game allows you to win huge prizes that go up to 60,000x the stake from a single spin. These prizes can be achieved through the bonus features that we’ll explain below. 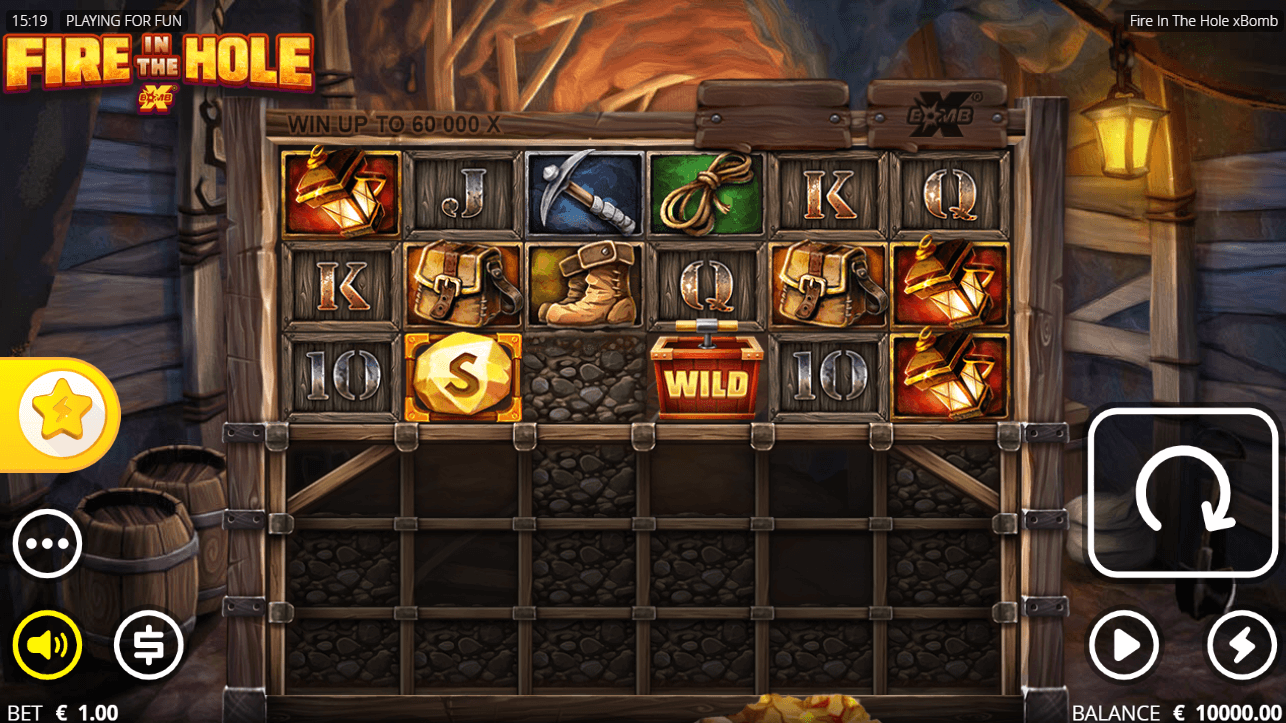 The Fire In The Hole slot has a mining theme. The game grid is put in a wooden frame and is placed on a background showing the underground mine. As usual for a Nolimit City release, the game is well-designed with high definition graphics and visuals. There’s an epic soundtrack playing in the background while you spin, which adds to the overall gaming experience.

On the reels, you’ll find low-value royal symbols - 9, 10, J, Q, and K, awarding up to 1.5x the bet for 6 in a combination. They are followed by the high-value symbols, including pickaxes, climbing ropes, boots, bags and oil lamps. Hit six on the reels and you’ll win up to 7.5x the stake. The dynamite detonator is the xBomb wild symbol which substitutes for all symbols to help you win. Finally, the gold nugget is the scatter, used during the bonus round.

RTP, Variance and Payouts for Fire In The Hole Slot

The theoretical RTP (Return to Player) of the Fire In The Hole slot is 96.06% which is the industry standard. What’s more, the game has a high variance, and on the scale of 1 to 10, the developer put it at a maximum of 10. This means that the highest prizes will come from the bonus features.

As we’ve mentioned above, the game can deliver impressive payouts that go up to 60,000x your total stake from a single spin. Here you can read more about the Variance, Volatility and RTP in online slots and see which model suits you best.

Gameplay and Features on Fire In The Hole Slot

The mine in the Fire In The Hole slot comes with plenty of features and extras. There, you’ll benefit from collapsing reels which allow you to form more wins in one spin. Keep an eye out for xBomb wilds which can deliver some exciting prizes, as well as free spins where up to 6 modifiers can boost your winnings. Here are all features explained in detail. 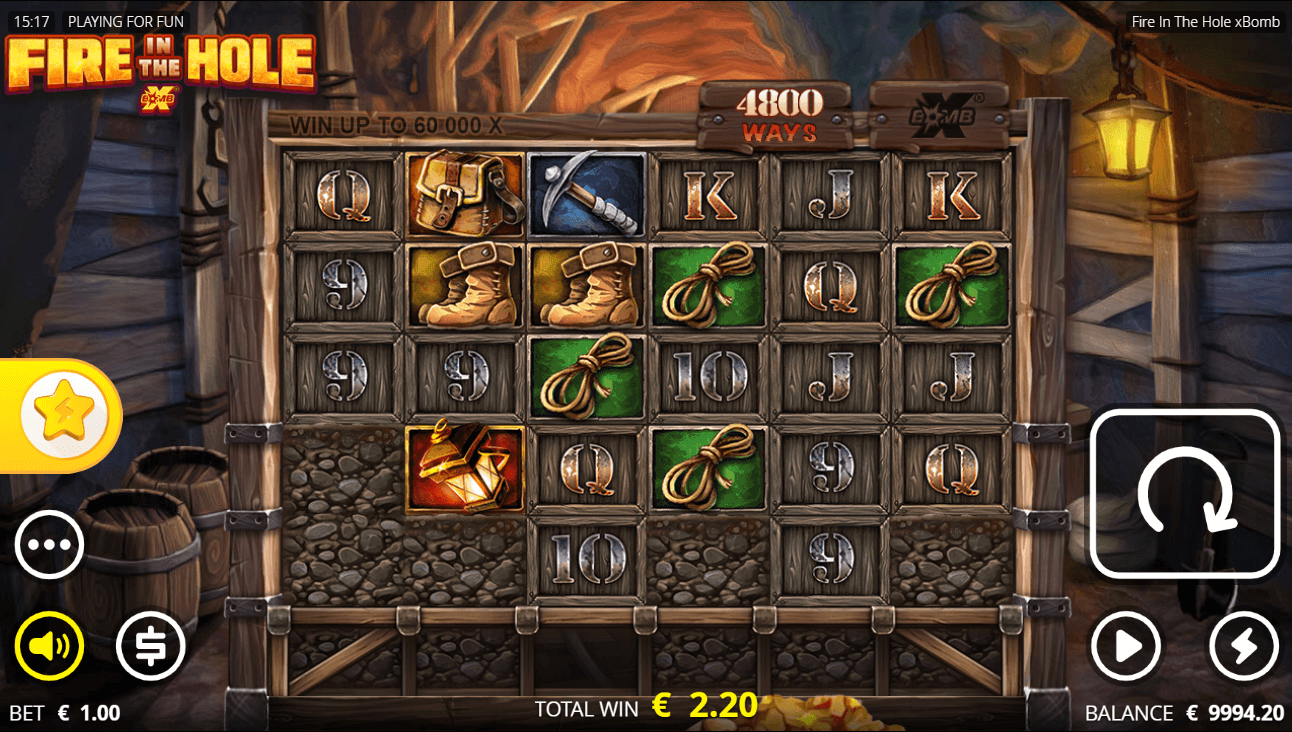 The Fire In The Hole slot by Nolimit City is played with the Collapsing Mine feature. The game starts on 6 reels and 3 rows that offer 486 ways to win. Every time you land a winning combination, the symbols that are part of the win are removed and replaced by new ones. This provides you with the chance to land another win in the same spin. What’s more, the game area will increase and you’ll get extra rows. This can lead to playing with 46,656 ways to win. 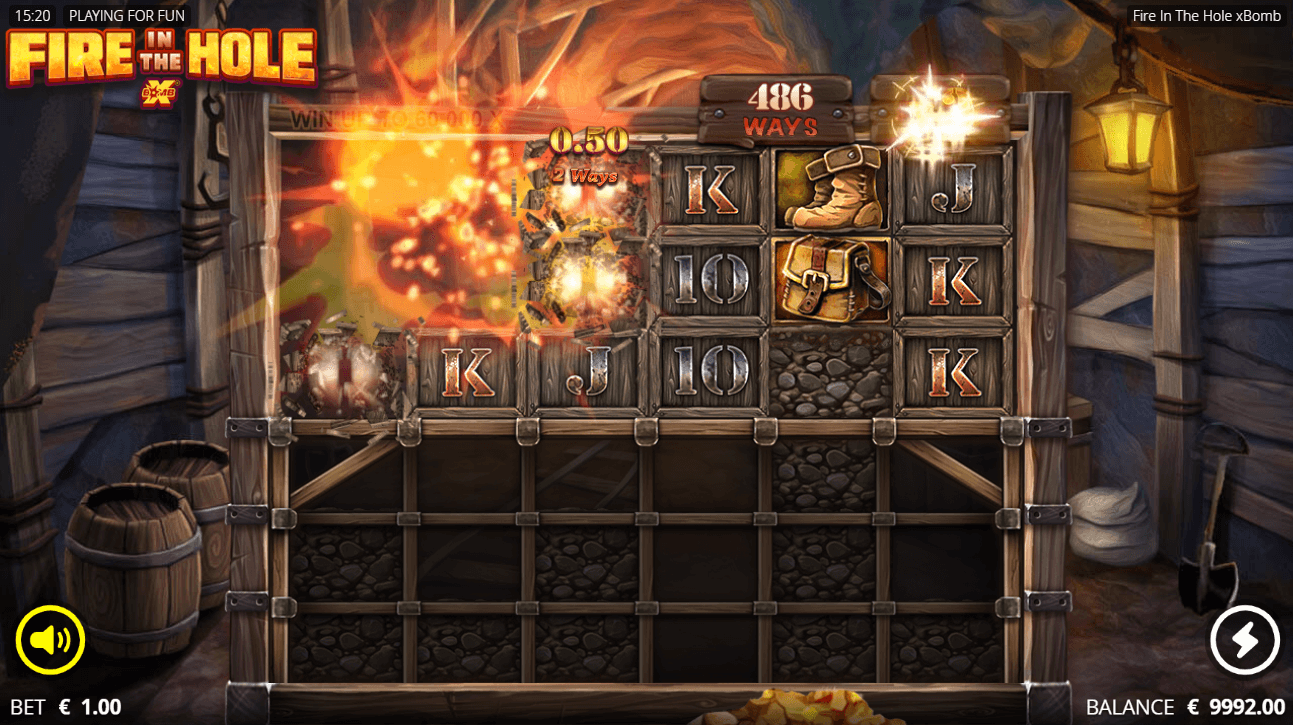 The xBomb symbol is the game’s wild which acts as a substitute for all regular symbols to help you complete a win. But, the wild symbol will also trigger the xBomb Wild Multiplier feature every time it lands on the reels. Then, the wild will explode and destroy all the adjacent symbols, apart from the bonus symbols. At the same time, the multiplier increases by 1. The xBomb wild doesn’t need to be part of a winning combination in order to explode and trigger a collapse.

The Wild Mining feature is triggered when 3, 4 or 5 of the same type of symbol land in a horizontal line and there’s no winning combination. Then, those symbols will be removed and replaced by Wilds. 3, 4, and 5 symbols award 1, 2, and 3 wilds respectively. All symbols apart from wilds and scatters will then explore, triggering a new collapse and new chance to create a winning line.

During the Free Spins, the reels are made up of blanks and coins. Each coin awards a cash prize and resets the number of free spins to 3. Keep an eye on the top row where special enhancers will appear on every spin and award extras to the landing coin. These are the extras you can win:

The feature continues as long as you have free spins, fill the entire screen with coins, or hitting the maximum win of 60,000x the stake.

Fire In The Hole Slot on Mobile

The Fire In The Hole slot is built with HTML5 which ensures that you’ll receive a top-notch gaming experience on all devices, including mobile. You can easily access the game on any Android, iOS and Windows device where it will perfectly adjust to your screen.

Nolimit City had a huge success lately, having released some absolute hits recently. Some of the most popular Nolimit City slots include the East Coast Vs West Coast slot that is powered by the xWays game engine. There, you’ll play with more than 80,000 ways to win, so prepare for a bumpy ride through all the features, bonuses and triggers.

Another well-known game from Nolimit City is the San Quentin slot. It takes you to the notorious, California-based prison to explore the xWays mechanic and win huge prizes. Or, if you’re fan of ancient Egyptian-themed slots, check the Tomb of Akhenaten slot. The game takes you on a search of hidden treasures across five reels with Sticky Win Spins and Pyramid Wilds.

Fire In The Hole is an excellent example of why Nolimit City slots are so popular. The developer makes high-quality slots with many innovations, like the ones we have in this game. Not only does the Fire In The Hole slot offers plenty of in-game bonus features, but the maximum payout is fantastic. There, you’ll benefit from over 40,000 paylines, free spins, wild multipliers, and more. All these factors deliver a top-notch gaming experience.

Discover the Fire In The Hole slot by claiming a welcome offer right from this page and play at top-rated online casinos.