The game has a layout of three rows and five reels that spin across five paylines. Five indeed, but these can register winning outcomes both left right and right to left. Players need at least three matching symbols for a winning outcome and bets have a wide range that starts with pennies per spin. The theoretical return to player (RTP) of Joker Hot Reels hasn't been released, however, players can win up to 6000x from a single bet in this game. 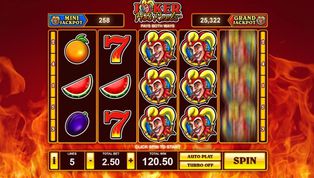 The slots experts at Playtech are adding their own imprint on the spate of releases in the retro slots area. The game at hand is called Joker Hot Reels slot because the gameplay puts the jolly jester at the center of the action. Players will find an interesting potential in this game, as the maximum payout is 6000x multiplied by the bet, however, to play Joker Hot Reels means opening up to the possibility of winning one of the two instant jackpot prizes.

Players will find a very simple game, because it is after all, a fruit-themed slot. Playtech's Origins studio could have instilled the game with some extra features, but the action boils down to making jam with the fruits that are at your disposal, which isn't such a bad thing anyway. The joker symbol is the wild and it is reputed to come in full stacks of three symbols on the reel set. In addition to this, the game can pay both ways, which is a plus amidst the dearth of features.

In terms of graphic design, the slots experts at Playtech have designed the game according to the tropes of the genre. Just like in so many other games that are classic or retro, the background is on fire. Something about the hot sevens symbol and fire that goes hand in hand. But anyway, Joker Hot Reels slots has two sets of symbols - low-paying and high-paying fruits and sevens.

The symbols have been designed in a very basic manner and not because the studio couldn't muster better drawing and rendering skills, but simply because the look and feel of the game has to be as retro as they come. Nevertheless, there are few animated bits and moving parts that help Joker Hot Reels play like any decent online slot out there.

Players can start rolling on the reels right away by pressing the big yellow rectangle that has the lettering SPIN on it. This action deducts the active bet amount each time the player makes a spin. To change the bet amount, press the minus and plus buttons in the bottom-left area of the screen. Joker Hot Reels slot has a range that starts from pennies and ends with a maximum of a few hundred pounds.

Regardless of the bet, the game always plays across the five paylines and with the possibility of ringing up winning outcomes both left to right and right to left. The gameplay is lively and dynamic, even though there are only five paylines. Playtech Origins has succeeded in doing that, with the help of the joker symbol, and we will grasp the moment as to why.

In the meantime, here is a suggestion about how players can enjoy the game. One way is to press the spin button for each turn and the other way is enable the Auto Play mode. Pressing the corresponding button, which is to the left of Spin, opens up a shelf with automatic spins presets, players can choose any one of these in order to set the reels spinning automatically.

Another button may be useful. Players who want to know the amounts that are paid for each symbol combination can press the 'i' button in the bottom-left corner. This is the button for the paytable, which also contains few other details about the gameplay.

As per the usual, players need three or more symbols of the same kind in order to trigger a winning outcome. The winning outcomes can be helped by the joker symbol which is wild and substitutes for any of the symbols.

In terms of value, the red hot seven symbol can trigger the most lucrative prize, however, all other symbols pale in comparison. Joker Hot Reels is after all a jackpot slot that can trigger two respectfully voluminous instant prizes.

The game has that title not without a reason. The joker symbol is the one that we anticipate most eagerly to show up in greater numbers. Thankfully, the symbol can stack up and is reputed of landing in threes on a full reel.

Another detail worth noting is that the symbol can become sticky and induce a respin. When it does that, the other reels can result in a stacked joker also, which is where the game's high-paying potential lies - and prizes of up to 6000x multiplied by the bet.

Players can discover the game at online casinos that host Playtech slots and specifically this game. Those casinos that have games in practice play mode enable players to try any game with free credits, but the downside is that the payouts aren’t paid as real cash.

Players will find an engaging game, high pay potential and two jackpot prizes. To the slots experts over on this side of the screen, this means a legitimate game that shouldn’t pass under the radar.

Discover the Joker Hot Reels slots by claiming a welcome offer right from this page and play at top rated online casinos.