Golden Lotus slot is a Far-East themed online slot that has five reels and 25 paylines. The bonus symbols conceal two bonus features: White Lotus and Chinese Garden, which are free spins that come with a different set of circumstances and possibilities for the win. Let's not omit the fact that Golden Lotis has a Progressive Jackpot that can come in at random with the concluding of any non-winning spin. The up to 20 free spins and the x3 multiplier are certainly the features that will interested many players who are into progressive jackpot slots.

The ancient Chinese culture has always been an inspiration for various gambling products like poker, blackjack and slot machines. RTG has used exactly this theme for Golden Lotus slots by naming it after what was considered the luckiest flower in Ancient China.

Golden Lotus slot is a five-reel, 25paylines game that comes jam-packed with lucky symbols on its reels. It also features a great number of bonus features including Golden Lotus Wilds, White Lotus Scatters, Chinese Garden Feature and White Lotus Feature. The game also gives players the chance to win not one but two random progressive jackpots – minor jackpot and major jackpot. With the bet per spin starting from just 0.01, all players of the slot can enjoy hunting for the luckiest flower in China.

Golden Lotus is themed on the luckiest flower in Ancient China – the lotus. The slot comes with five reels in three rows and a total of 25paylinesto play your bet across. This reel set is placed against a background of a Chinese dawn with a pagoda and a willow tree positioned in the central part of the screen.

All symbols in the game are either theme-related or have been given a certain Chinese twist.

The low-value symbols include six standard playing card symbols in different colour including 9, 10, J, Q, K and A. They are listed in ascending order and give payouts for three, four and five matching symbols.

Golden Lotus makes use of two additional symbols on its reels. One of them is the White Lotus scatter which awards scatter wins. The scatter wins are multiplied by the total bet. The other is the Golden Lotus wild which substitutes for all other symbols except the scattered white lotus.

The Far East may not be as popular slot theme as Ancient Egypt, or Mesoamerica with its glorious civilisations, but Chinese and Japanese culture are represented in quite a few games. Realtime Gaming did a pretty good job with Golden Lotus. The title obviously matches the game theme and appearance, but things will become a lot clearer once you see the reels and the symbols that appear.  All of them, even then standard card symbols match the game theme.

It is interesting to not that in this game you will see elements of both Japanese and Chinese culture in this game.

How To Play Golden Lotus

Golden Lotus slot is an easy-to-play game since all buttons are positioned at the bottom of the screen and are marked well.

Once you have set your total bet for the spin, you can set off the reels by pressing the green ‘SPIN’ button in the bottom right corner of the screen. If you want to give your clicking finger a rest, you can always go for the game’s Autoplay option. 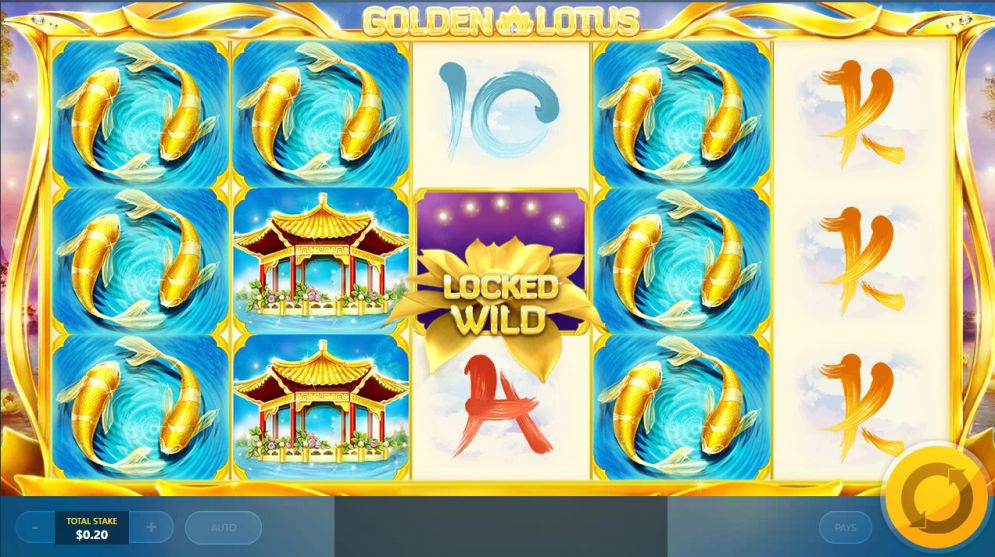 How To Win Golden Lotus Slots

This feature is triggered by landing at least three Golden Lotus symbols anywhere on the reels. You are given four picks from the eight Golden Lotuses revealed. Each selected Golden Lotus will award you up to 100 the triggering bet or 5, 10, 15 or 20 free games. During the free spins, all White Lotuses will change into Golden Lotus with all prizes receivinga x3multiplier. The feature can also be retriggered.

The game will award you 8 free spins when at least three scattered White Lotuses appear anywhere on the reels. During these spins, all White Lotus symbols get transformed into Golden Lotus and all prizes will geta x3, x4 or x5 multiplier. The feature can be retriggered by landing additional three or more Golden Lotus symbols anywhere on the reels.

The progressive jackpot in Golden Lotus can be won after the end of any spin. The jackpots are triggered at random with the wins added to the other wins.

What Are Progressive Jackpots?

When it comes to variance, Golden Lotus is a game with medium variance. This means that Realtime Gaming have set the payouts in a way that the frequency matches the maximum winnings amount, so that both are somewhere in the middle of the theoretical table. You can expect to win at a similar rate and to win similar amounts as with most other online slots.

If you intend to play Golden Lotus on a device different that your PC or laptop, we’re going to tell you that it is possible to do so, as Golden Lotus is available on a range of other devices, including smartphones and tablets. Just open the casino site in question in your mobile browser and you will get a chance to launch this game right away. It was built using HTML5 technology which ensures seamless mobile integration.

Play Golden Lotus today but be sure to claim your welcome offer from some of the slots sites promoted at Slotswise!