Bounty Raid comes with a layout of three rows and five reels that spin across 10 paylines. Wins are made with at least three matching symbols and there are few special symbols that can improve the odds at winning. The theoretical return to player is 94.72%, the variance is medium and the maximum payout that can be made from a single spin is up to 1000x multiplied by the winning bet. 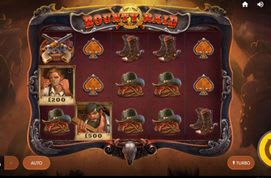 It's the Wild West prairie and there is always a gold digger who bites the dust in a raid. Horses riding in the distance raise lots of dust but when it all settles down, the Bounty Raid slot will show the outcome. This Red Tiger Gaming slot is filled with action, as both the graphic design and the extra features bring up exciting gameplay that can lead to prizes of up to 1000x.

In terms of extra features and gameplay dynamic, Bounty Raid has six characters whose symbols appear on the reels each one bringing on their own modifying feature. Part of the characters are bandits that carry multiplier values when they have been arrested by the Law. In addition, a string of high-paying and low-paying symbols are on the reel-set too.

In terms of graphic design the game is a portrayal of the dangerous world of Wild West money-making. The players will discover a dramatic background that shows a raid and on the reel-set there is a dramatic reel adventure unfolding that involves nicely-drawn symbols an visual effects.

Bounty Raid slots has a number of animated symbols that result in coins gushing out from thereabout whenever wins occur. All of this comes together in a seamless slots action that can be enjoyed on personal computers and mobile devices. Throughout the game there is a musical theme that reflects the character of the game, fitting it quite nicely.

How to Play Bounty Raid Slot

The controls layout for this game is typical across Red Tiger Gaming slots, so the players who have familiarity with them will be underway spinning the reels in few blinks. First and foremost for all first-time players is to choose a stake that reflects your playing style and more importantly, the balance.

Choosing the bet requires locating the Stake control, which is in the bottom left corner of the screen. The minus and plus buttons along the side of the bet amount can be used to scroll through the avacilable bets. Bounty Raid slothas a nice range that starts with £1.00 per spin and ends with a maximum bet of £100.00.

To play the game hands-free, open up the autoplay menu by selecting the Auto button. This is where the game offers a number of automatic spins preset plus additional options that can set up one or few controls on the spend. And lastly, the paytable can be viewed by selecting the thee dash button in the upper right corner.

How to Win Bounty Raid Slots

Winning at the game is possible with three matching symbols on the reels, as well as with catching renegades during the feature.

A category of high-paying symbols includes a pair of cowboy boots, a lasso and a hat, a saddle, colts and a belt and a crate with gold.

Most valuable of these symbols is the last one, paying 8x multiplied by the bet. The reel modifiers can bring out the best in the game, however.

The bounty hunter symbol locks all bandits whenever they appear on the reels, so when a respin feature is awarded there is potential for getting bigger wins when other bandits land on the reels.

The sheriff's symbol can land on any, except the third reel, to capture all bandits and combine the prizes they carry into a lump sum.

The game doesn’t come with scatter-bonus symbols so there isn’t a free spins bonus. However, the respin bonus can extend longer in the following way. The bounty hunter symbol can appear more than once, triggering a respin for each time. During the respin game, two symbols appear in addition to those of the bandits. There is a sheriff's star symbol, which increases the values of the bandits' symbols and the sheriff’s portrait symbol which adds the amounts together.

Reg Tiger Gaming are releasing the game as a free play demo, which enables players to try it out for free and get a sense of the features and the gameplay dynamic.

This is one of those games that don’t follow the usual confinement of features: wilds, free spins, perhaps a reel modifier. Instead, it plays like a Hold and Win type of a jackpot game, with the exception of the bonus symbols’ values become bigger in the presence of a sheriff’s star symbol.

Discover the Bounty Raid slots by claiming a welcome offer right from this page and play at top-rated online casinos.