Gods of Gold InfiniReels is the latest slot NetEnt offering the infinite reels payout system. What starts off as a 27 payline game in a 3x3 layoyt can quickly expand to a huge number of ways to win and reels, with each consecutive wins. The maximum exposure is an estimated 5000x on the winning bet and for the features, there is a free spins bonus and two reel modifiers with guaranteed wins. 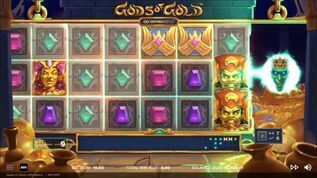 NetEnt have spun up a new slot with energetic gameplay and a set of features that have been merged seamlessly for a top level gaming experience. Gods of Gold InfiniReels slot is electrified by the InfiniReels payout mechanism which causes the reel-set to expand with additional reels, which increases the number of ways to win.

The slots experts at NetEnt have selected the perfect theme to instil it with the said feature along with the respins. An imaginary pantheon of gods resides in a palace that is brimming with gold coins and artefacts. Accordingly, the symbols on the reels are made of gold and gems too, which says a lot about the character's consistency.

All this is fused for a thrilling adventure that starts out with three reels and three rows and has a medium to high variance. The theoretical Return to Player is a couple of notches above 96.00% and there is maximum exposure of 5000x multiplied by the winning bet.

The game has the familiar NetEnt layout, which is a rehashed version of their settings and controls bar that they have kept for years. This one is improved and makes configuring the bet involve fewer clicks and turns thanks to the removal of the bet levels option.

Few spins on the game and distinguishing players can recognize the strokes of NetEnt's artists who have started this one out with a fresh head on their shoulders. The result is a game that isn't short of impressive.

The symbols are split into the usual two categories. The high paying ones are masks and statues of gods and the other category has gems in a few different shapes.

Gods of Gold InfiniReels slots is dynamic, and this is, to say the least. The infinireels payout system does its own to electrify the dance on the reel-set and there are animated bits that are quite the thing. To wrap up the design element, NetEnt have hired talented composers to come up with a dramatic musical leitmotif that follows along this reel adventure.

How to Play Gods of Gold InfiniReels Slot

The bets in Gods of Gold InfiniReels slot start with a reasonable £0.20 per spin and end with a maximum of £100.00. The maximum is now the new normal amount for a max bet, which is a more sensible high stakes bet compared those offered in most of their previous releases.

To select your bet, simply choose the coin value by clicking or tapping through the minus and plus buttons, and watch the amount in the BET window change. The Spin button is located in the bottom centre, just underneath the third reel. To the right is the fast forward symbol that causes the reels to turn faster when toggled on.

Those who wish to engage Gods of Gold slots in its autoplay form can do so by pressing the button to the left of spin. Autoplay involves selecting from the automatic spins presets and adding an optional stop or two, which helps mind the balance.

How to Win Gods of Gold InfiniReels Slot

As we said at the start, the reel-set starts off with three reels and wins are made on 27 ways to win. Additional reels are added with each winning outcome. These start with three matching symbols that must occur on consecutive reels.

If there are other matching symbols added to the equation that has resulted from the coming of the new reel, the reel-set on Gods of Gold InfiniReels slot will expand yet again. Wilds can replace any of the game's standard symbols, which means they can also cause new reels to occur.

This is essentially an inverted take on the collapsing/cascading reels system, with the only difference of new reels being added instead of subtracting the winning symbols. In terms of payouts, the most valuable symbol in the game is the red-hatted king. Ten of this symbol pay an amazing 160x on the winning bet and five of the same pay 5x.

If you fancy the style of NetEnt and this type of myth, adventure-themed slots set up in the abundance of gold, check the Mercy of the Gods slot, or dive in the mysterious gameplay of  Egyptian Heroes.

10 matching symbol wins don't occur too often, so it is obvious that the win outcomes at the bottom and centre of the payout table will be lower than usual. Makes sense, in view of all the extra features that this game has.

One of the random modifiers is a respin on the last added reel that stops the progression of wins. Not only does this result in a respin, but one that makes a guaranteed win too.

The second modifier is called Multi Slam which causes two to three reels to add to the reel-sequence in order to produce a guaranteed win.

Three scatters trigger the free spins bonus. The scatter represents the golden sun disc. Three of the same trigger 10 spins and each additional one on the triggering outcome adds five extra spins to the tally. What makes this rare event eagerly anticipated for are the guaranteed wins.

NetEnt is expected to release the game as a free play demo at online casinos that host their games.

A top payout of 5000x and variance from medium to high seems like the perfect setting for an adventurous foray inside the crypt. The RTP of 96.20% ought to sail well with players who wouldn’t consider slots that have below-average RTP. Yes, a lot of people tend to endear NetEnt for some reason, maybe it is their originality or the fifth element they deploy, but here we have a game that is indeed worthy of checking out.

Discover the Gods of Gold InfiniReels slots by claiming a welcome offer right from this page and play at top-rated online casinos.

Is Gods of Gold InfiniReels available at any NetEnt online casino?

Yes, Gods of Gold InfiniReels slot is available at a number of online casinos that feature other NetEnt slots. Read our game review and see which online casinos feature this game.

What is the maximum amount I can wager on Gods of Gold InfiniReels?

You can bet as little as 20p per spin, and up to a maximum of £100. With a higher wager, the potential prizes are higher, not just on Gods of Gold InfiniReels slot, but generally.

What is the Gods of Gold InfiniReels RTP?

The return to player percentage for Gods of Gold InfiniReels slot game is 96.20%.