Wrath of Medusa comes with three rows and five reels. These spin across 20 always active paylines that can trigger wins consisting of at least three matching symbols. The players will find attractive payout possibilities where the most valuable symbol pays a whopping 500x multiplied by the winning bet. 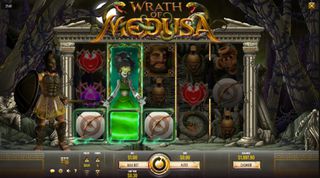 Rival Gaming take us to the realm of ancient mythology where the players can have a stare-down with the medusa for a chance to win cash prizes. The game comes with a number of exciting features that elevate the reel adventure and the odds at making bigger wins. All of the above is just the surface of Wrath of Medusa slot, while the best part about it is actually playing the game.

The game has both engaging base game and extra features. The wild symbol can come on one position on the reels or appear expanded across the reels. The bonus feature is triggered by a bonus/scatter symbol which prompts a choice between three possibilities for the free spins game.

In terms of the graphic design the players can discover a fully animated and dynamic reel adventure. The story about the medusa is that she turns wayward heroes into stone, if they succumb to peering into this pretty creature's eyes. On both sides of the reel-set is a lively figure - one is the medusa and the other is the hero that is supposed to slay her. They taunt one another throughout the game.

Wrath of Medusa slots comes with lively animated transitions on the reels also. Whenever the medusa comes one as expanded wild, it enchants other symbols beside it when they are part of the winning outcome. The pick-me game before the bonus feature is another one of the cool video effects, where the soldiers turn to stone and crumble. Overall, in terms of the visuals, the game is a solid 8 out of 10.

How to Play Wrath of Medusa Slot

Rival Gaming have their own way of creating the layout of the controls and buttons, so in that regard they are quite unique. The players can have an easy time finding their way around the reel-set to set up the game.

All of the controls are at the bottom of the reels. Central position is reserved for the spin button. On both sides of that button is the Max Bet and the Auto button. Above these are the amount of the bet and the latest win amount. The balance can be followed to the right.

To change the bet on the Wrath of Medusa slot, press the up and down arrows underneath the Value setting. The range of coin values starts at one penny per line and has a 25p maximum. The final bet comes as result of choosing the number of coins (or bet level if you will), which is the setting to the right.

One way to play the game is by selecting the Auto button, which opens up the presets for the automatic spins. The players can choose between 3, 25, 50 and 100 spins. Few other settings that are not related to the gameplay can be found in the bottom left area of the screen.

How to Win Wrath of Medusa Slots

The game has two sets of symbols. The low paying symbols are represented by different gems encased in cristaline structures. The high paying symbols are tools of war. Most valuable symbol is the golden coin. Five of the same pay 500x multiplied by the winning bet. Five medusa symbols pay 250x. Five crossed swords pay 100x and five snakes pay 75x and so on.

Wins are made with at least three symbols that must begin on the leftmost reel and extend on one of the 20 paylines. Wins on multiple paylines are possible, especially when the medusa symbol has appeared expanded across one or more reels.

Wrath of Medusa slot has two special symbols: the wild and the bonus/scatter. the medusa is wild and also pays the prise stated above.

In terms of the bonus feature, three scatters trigger the free spins bonus. But before you get to play it, you first need to dispatch one soldier to face the medusa. The two that fall out are turned to stone.

During the free spins, the wild symbol is the soldier. Each wild that appears on the reels becomes sticky and trigger respins when they form a win. Additional sticky wilds trigger more respins and remain sticky for the end of the free spins bonus.

Rival Gaming have released the game as a free play demo slot, which enables players to try it for free and get a taste of the gameplay and features.

The game has a maximum win based on one symbol kind of 500x however, symbol wins can repeat more than once. Whether it is the big win that may strike against the medusa can only be found out by those who venture inside her cave.

Discover the Wrath of Medusa slot by claiming a welcome offer right from this page and play at top-rated online casinos.