A fresh take on the Fishin' Frenzy classic puts us underneath a buccaneer's hat and in charge of a ship called Pirates' Frenzy. The game at hand has five reels with a sixth one being optional. Sizeable payouts are possible with the picture symbols and there is a free spins bonus that comes with the possibility to land money bags with extra prizes attached. 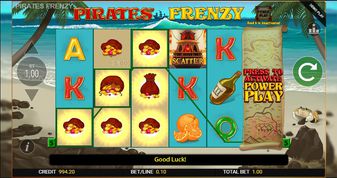 Play the Pirates’ Frenzy slots for a chance to win more than 10,000x on the payline bet when the Power Play more is on.

Blueprint Gaming and RTG have teamed up to create a slot game that's intended to take a ride on the popularity of Fishin' Frenzy. The titles being alike is no coincidence, nor is the layout and the gameplay features. But let's not dismiss Pirates’ Frenzy slot right away because the game is neither a clone nor it pretends to be something other than Fishin' Frenzy wearing a buccaneer's hat.

Nevertheless, Pirates’ Frenzy is just as fun to play as that other game. Even though it comes with ten paylines, this time around these aren't selectable, which means penny bets are out the window. Another thing that's strikingly new is the Power Play option, which can be toggled on at will, and with it toggles a sixth reel.

With the extra reel come bigger potential payouts. The game offers a paytable of excellent cash prizes, with a maximum win based on one symbol of 10,000x on the payline bet. What is more, a wild symbol substitutes for all and does something else to improve the win outcomes, and there is a scatter symbol that triggers a free spins bonus.

We let it in at the start that this game and Fishin' Frenzy share a lot of common aspects in terms of the graphics design. The blue layout is easy on the eyes and carries the salty air right to your nostrils, because the setting of this pirate adventure is a deserted paradise island.

The symbols of Pirates' Frenzy slots fit the title's description, as there is the usual stuff that one may find on a pirate ship: a parrot, bags of gold coins, an anchor, citrus against that pesky scurvy and, of course, a bottle of rum.

Low-paying symbols are the high cards, starting with the ten and ending with the ace, which the developers didn't bother rendering in another guise that would make them different from the same in that other game.

How to Play Pirates’ Frenzy Slot

The game begins with the push of the spin button, which like in the manner of nearly all Blueprint Gaming slots, can be found on the right hand side of the reel-set.

But before you go ahead and push Spin for a chance to win, make sure that the default bet isn't something you wouldn't want to bet on the first go. The amount o the bet is displayed in the bottom right corner and to the left of it is the amount of the coin size, which is the bet per each of the ten paylines.

Pirates' Frenzy slot has an autoplay button which can be seen underneath the spin button. Press it if you want to configure the game in its automatic spins mode. There are additional options that can be configured for the sake of minding your balance, things like stop the spins on a single win amount or a total balance decrease, and few other options.

To select the bets in Pirates' Frenzy press on the round button that aptly states BET. This will open up a box with all of the bet amounts. You can choose between £0.20 for the minimum and £100.00 per spin for the maximum. The first option reflects two pennies per payline and the maximum wagers £10.00 on the payline.

How to Win Pirates’ Frenzy Slots

Payouts are made with three or more symbols of the same kind falling on any one, or more, of the game's ten always-active paylines. There can be more than one win resulting from the same spin.

That being said, let's take a look at the payout values for the high-paying symbols in Pirates' Frenzy slot.

The second most lucrative symbol is the parrot. It pays 2000x for five and 4000x for six of the same. The Anchor pays 1000x and 2000x and the oranges an rum pay 500x and 1000x for the state iterations of either five or six matching symbols.

You can get between three and six scatter symbols to trigger the free spins bonus. The optimal event of six boat symbols anywhere on the reels awards 50 free spins, which can be retriggered with three or more scatters during the bonus.

During the free spins the pirate symbol falling together with money bags causes the game to ring-up the sums of money that are attached to the latter symbol. These amounts are relative to the bet.

The players will find the game available as a free play demo at online casinos that host demo slots. This enables the players to try the game and decide if it’s one to play with real money.

Anyone who has played Fishin’ Frenzy slot will find this game just as charming. The simplicity of the design makes it unique, and so do the potential payouts. Fishin’ Frenzy has remained on the slots rosters for years, making it known that the players love it. We don’t see how a game that makes few improvements in the payout department not attract the same kind of attention and loyalty.

Discover the Pirates’ Frenzy slots by claiming a welcome offer right from this page and play at top notch online casinos.

Is Pirates Frenzy an Online Slot?

Are There Bonus Features in Pirates' Frenzy Slot?

There is a free spins bonus feature on the Pirates' Frenzy slots. To trigger the bonus you need to get three or more scatter symbols. Also, the chief pirate symbol collects the cash values attached to the money bag symbols, when both symbols stop on the reels during the bonus.

Is there a Buy Feature in Pirates' Frenzy?

Yes, there is an extra feature that you can buy but it isn't a free spins bonus. In this game we have a sixth reel which is inactive, unless you toggle on the Power Play button in the top right corner. In the event, the bets become more expensive, while the potential winnings way more lucrative.

Can you play Pirates Frenzy with Bonus Money?

The short answer is, yes, you can play Pirates Frenzy slot with bonus money. To do that you need to claim welcome offer on this page for a casino that hosts this online slot.

What is the Pirates Frenzy Variance/Volatility?

Big wins are possible because Pirates' Frenzy slots is a high variance game. This means that small and medium wins will post more frequently, while a really big win is a rare event yet possible to happen nevertheless.

What is the Jackpot Prize on Pirates Frenzy?

The most lucrative symbol pays 10,000 on the payline bet and this is an instant prize that is triggered by five pirates on a payline. This doesn't have to be a one time event, as the game can repeat this payout, if you are lucky enough to get it.