Megaways Jack slot has a rather heavy payout potential with 25,000x times the winning bet, which can result from a single spin on the 117,649 ways to win. That will ahve to be the luckiest succession of events on a this game but payouts of up to that amount are possible nevertheless thanks to the cascading wins and multipliers system. 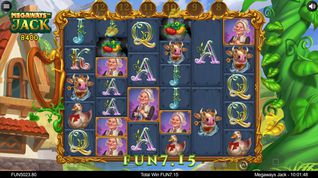 A slot game with a fairytale theme takes Jack off of the beanstalk and places him inside the megaways engine carrying the fullest capacity of 117,649 ways to win. This is an Iron Dog Studio production, licensing the megaways maths from BTG to a good effect.

The game is a high variance affair with a theoretical return to player of 96.00%, right on the average. It isn't all base-game here because besides the free spins bonus Megaways Jack offers other features, such as four reel modifiers that can make a positive difference on any given spin.

When it comes to the graphics design, Iron Dog have ironed-out a visually pleasant adventure on the reels. One thing they couldn't have gotten away with is not including a beanstalk somewhere in the game. Besides the crooked stalk on the side of the reel-set, the creeper can crawl around an entire reel.

Megaways Jack slots is a dynamic reel adventure even though the symbols are quite static in their positions. Nevertheless they do get visited by a flurry of lights and the occasional ivy wrapping around. Iron Dog have created a fun-loving game that wouldn't leave you bored of visual stimulus and there is also a musical theme that's pretty nice to listen to.

How to Play Megaways Jack Slot

The game can start with the push of the Spin button, which is to be found in the bottom right corner of the screen. Optional is the autoplay button, located to the left of, which allows the players to select the number of automatic spins and let the game play on its own.

To choose the bet press the coin stacks button in the bottom left corner. This opens up a grid with the available amounts for the wager per spin, which start at the smallest bet of £0.20 and ends with £20.00 per spin. Regardless of the choice of bet amount, the game will always play towards the highest potential of 25,000x and all available multiplier amounts.

To have a good view of the balance and keep track of it, the concurrent amount is updated following every spin and eventual win. The balance on Megaways Jack slot is located in the bottom left corner of the screen and above it is the number of ways to win that the game has reached on the current spin.

The settings menu is to be found in the three-dash button in the upper left corner. This is where you can set few things that apply to the gameplay and view the paytable along with information about the bonus features.

How to Win Megaways Jack Slots

It being a megaways slot, the win outcomes are made with three or more matching symbols. A wild replaces any of these, except the bonus symbol. Whatever win outcome emerges from the spin, it will post starting on the leftmost reel.

Megaways Jack slot makes cascading wins, which means, the symbols that are part of a win are taken out of the reels and the blank positions are replaced by new symbols. Optimum wins are made with six symbols.

The most worthy symbols are the high-paying picture symbol: the giant, the golden goose, the old lady and the cow. Jack is the game's highest paying symbol with 25x multiplied by the winning bet for five matching symbols

Unlike most megaways slots, Megaways Jack slot offers a payout, albeit a tiny one, with only two of Jack's symbols.

The game includes a wild symbol which appears on all reels except the first one, to substitute for all symbols except the scatter.

The golden harp on the left of the reels is one of the themes from a fairytale story that comes to life in this game. It can wake to life and strum a melody that results in one of four random reel modifiers.

The magic harp can trigger

Respins that follow the spinning of reels that haven't produced a wining outcome, with the beanstalk remaining in place;

and the Random Wilds are a set of up to four wilds added anywhere on the reels.

The game packs a free spins bonus that is triggered by the number of consecutive wins based on the cascading wins system. The first traces of free spins start with eight cascade wins, triggering eight spins.

Nine will trigger nine spins, but then ten and 11 cascades trigger the respective number of spins, but with an added multiplier of 2x for the start.

Each additional tumble will add free spins that are capped at 12, however the multiplier starts at 3x.

What is more, the megaways engine's seven symbol reels appearing in the bonus feature result in that reel becoming locked for the remaining of the spins.

The game has it all, a megaways engine, more than just a free spins feature and a serious payout potential of 25,000x on the winning bet. That calls for attention to detail, as the game may be available to play with a welcome offer.

Discover the Megaways Jack slots by claiming a welcome offer right from this page and play at top rated online casinos.