Silver Lioness slot is a five-reel game with 1024 paylines that spin on a sun-steeped savanna and win a max prize of 20000 coins. The slot provides many free spins with the scatter symbol and delivers excellent payloads of cash. To find out how to score free spins, check out this review. 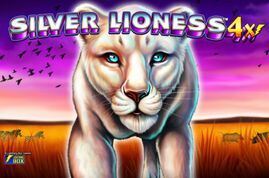 Silver Lioness slot is a five-reel game with 1024 paylines that spin on a sun-steeped savanna and win a max prize of 20000 coins. The slot provides many free spins with the scatter symbol and delivers excellent payloads of cash. To find out how to score free spins, check out this review.

The African savanna is a gigantic plain inhabited by magnificent animals, including many lion prides that roam the grasslands. The lion is the king of the jungle (and savanna), but the lioness and her hunting skills deserve special accolades, which is the reason why many natural documentaries follow female lion packs. The Silver Lioness slot celebrates this beautiful animal by having it as the centerpiece of an online slot machine. The game itself, developed by Lightning Box Games, is an exceptional piece which is exemplary of stellar graphic design and gameplay. The theme is succinctly grasped in the background and symbols, while the gameplay is accentuated by the Silver Lioness bonus features which offer a lot to play for. The overall effect is a good online slot machine that offers entertainment and chances for a nice win.

As was mentioned above, we have here a stellar slot machine with exceptional design points. The background has real depth as it portrays the night savanna sky, which oftentimes subsumes radiant hues of deep pink and purple, right after sunset. The bottom half is painted with dark-gold tones amidst which appears a silver lioness with a piercing blue gaze. The reel set of Silver Lioness slot is five times three and is made of five columns of parchment paper. The high value symbols are from the savanna - a pack of mongooses, a zebra couple, a yawning hippo and a tribal woman leader, while the low value symbols are the card numbers and letters nine, ten, jack, queen and king. The Silver Lioness slot has more than a couple specialty symbols and they will be covered in the section that outlines the bonus features. Before we get there, let's emphasize that every visual aspect of this game has been made to satisfaction, hence the Silver Lioness slot is an in-demand game with many online casino players.

How to Play Silver Lioness

Before you start the game, to avoid spinning the reels on the random amount, please click on the icon that is to the left of the Spin (play) button, which will open the configuration box. Here you can choose the coin value, which runs from 1 penny to 0.50 and the bet level, of which there are ten levels. In terms of currency, the maximum bet that you can play is on half a pound and ten levels, which will amount to £200 per spin. The smallest bet per spin is only £0.40 which is derived from playing one penny on the first bet level. It is obvious that the developer’s intention was to make this slot game playable across the spectrum of casino players. Whether low stakes or high stakes, Silver Lioness supports any.

Silver Lioness slot has five reels, three rows and the technology that extrapolates the paylines to 1024 ways to get paid. There are few general rules regarding the cashing-in of your winnings: the Silver Lioness slot multiplies all wins by the Coins Bet, except the winning combo which includes the scatter symbol; the scatter wins are multiplied by the total bet; the total multiplier during the free spins game is 36x times your bet; and few other rules which are available in the paytable.

How to Win Silver Lioness Slot

To cast our overview of this section we need to start with the specialty symbols. The first symbol that is to be considered is the Wild, which is a stylized rendering of the famous savanna tree in front of a full glowing sunburst. This version of the Wild appears on reels two, three and four, during the base game only. The Wild symbol that has two lion cubs is a multiplier of 2x whenever that symbol is part of the winning combination. The three-cub Wild is a 3x multiplier and the four-cub Wild is a 4x multiplier. The three Wild symbols with cubs appear only during the Free Spins feature and they appear on reels two, three and four - except the four-cub symbol which appears on reel two only.

The Silver Lioness slots logo, which features the lioness on two backgrounds - night and sundown - is the highest paying symbol. Five of the same pay 250 coins. The difference between the night and sundown symbols is the first appears in the regular game and the second during the free spins only. The developer doesn't state whether the free spins symbol comes with an added bonus.

Needless to say, Silver Lioness does wonders with the free spins feature thanks to the three wild symbols that also act as multipliers. Many online slots have free spins but few are as generous with the number of spins as Silver Lioness, so this is one of the features that makes this game stand out from many other.

Silver Lioness slots was so much fun to plan. We played it when it first came out and members of our team have been returning to it every once in a while for few or more spins. The conclusion is that Silver Lioness never disappoints and makes the gameplay exciting and entertaining. Feel free to come along and check out any of the welcome offers and sign-up bonuses on this page to earn free spins on any of our affiliate casinos.