Considering the payouts, the paytable contains symbols that are moderately lucrative, however there are two sets of multipliers that go up to 5x in the first one and up to 20x in the second one. In this view, Super Joker slot indeed offers chances for super wins and an adventure on the reels of a solid retro game. 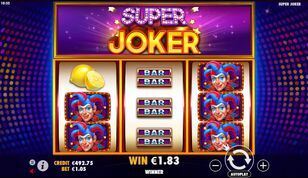 Play Super Joker slot for a chance to win cash prizes and multipliers of up to 20x on your total wins.

Pragmatic Play went full on with their three-reel slots and so much so that half of their 2019 releases were just that. Among these were so truly terrific games, such as Hot Chilli and Tree of Riches slots. Another one to add to that list is Super Joker slots, which is a retro game based on classical symbols and a set of features for a full online slots experience.

The three rows and three reels spin across five always active paylines. Besides the symbols that you'd find on any slots machine made between the 1900s and 1980s, Super Joker has a wild symbol, represented by a jester, which is the game's centerpiece that offers both a payout and a thing or two about the extra features.

The game has a three-part layout, consisting of the reel-set, a jumbotron above it which displays the wins and the game's video logo, and the background which is a sparkly sea of disco ball reflections.

Fitting for a Pragmatic Play production. Super Joker slot is fully animated. With each winning outcome the symbols seem to throb for a bit, while big wins are treated to a fountain of coins.

The wheel of fortune game results in a rain of golden coins and the jumbotron displaying a fanfarous count-up of the amount that's been won.

Pragmatic Play have included a musical theme that keeps you company, although it isn't anything you can't do without, so the speaker button is easy to find in the bottom left corner.

How to Play Super Joker Slot

Start your adventure by selecting the bet from Pragmatic Play's iconic setup. Pressing on either one of the minus and plus buttons that flank the Spin button will open up the menu.

The three settings can help you configure the amount that you want to play for the bet, the highest of which is £25.00. There are ten values for the coins per line setting and the coin values range between a penny and £0.50.

The smallest bet on Super Joker slot is £0.05 per spin, and any bet always plays across the game's five paylines.

You can configure the autoplay option instead of pressing the Spin button each time. Pressing that button will open up the settings menu where you can choose from the number presets and also set a number of stops, such as stop on any win, stop on cash decrease, stop on a single win amount, and so on.

How to Win Super Joker Slot

The game has eight symbols and the wild.

The highest paying of the regular symbols is the diamond which brings 5x when three of the same fall on a line. Next over is the golden bell which pays 3x and the star with 2x.

The lemon, cherries and the three variants of the BAR symbol pay lesser amounts for three of a kind.

Any of these symbols can be replaced by the wild, which itself is the highest paying symbol with 15x multiplied by the winning bet, when three jester stops in three positions.

The game's extra features are based on the wild. There is a Respin Until You Win feature which is triggered when there are two full vertical stacks of the same symbol and one reel that contains symbols which don't trigger a win. In the event the reel that is the odd-one-out will spin while the other two remain locked, until there is a winning outcome.

Super Joker slot has another feature called Double Multiplier Wheel that is triggered if the reel-set's nine positions are taken up by the same symbol.

In the event, the jumbotron above the reels shows two wheels of fortune. The lower one spins to show a multiplier that reacts on the total win on the triggering spin. The multiplier amounts are 2x, 3x, 4x and 5x.

There is another wedge that points UP towards the second wheel, which contains multipliers for the total win that are far greater than the bottom wheel. Precisely, the multipliers that can boost your winnings are 7x, 8x, 10x, 12x and 20x.

Pragmatic Play are one of the production companies that offer all of their online slots as demo games. Also, online casinos that provide demo games to register players may also provide a Super Joker free play option.

The game offers wins that are negligible when played on small bets. Casual players can enjoy the game playing bets of just five pennies. On the other hand, the higher-up bets can deliver decent amounts, however it is the extra features that can make the difference on this High variance slot.

Claim a welcome offer and discover the Super Joker slots at the online casinos on this page.